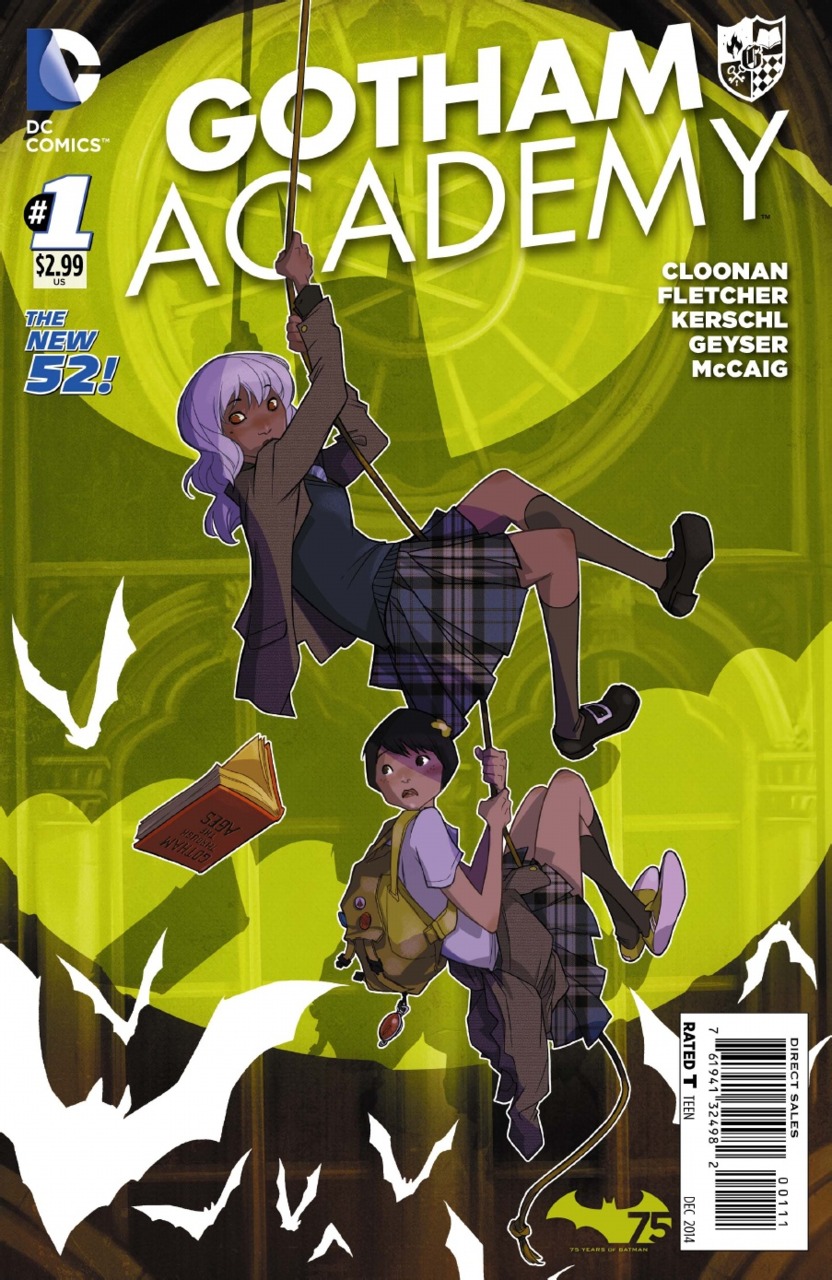 Gotham Academy may be the best thing to happen to DC’s New 52 line. Yes, you heard me correctly. This book is freaking awesome. If you picked this up this week, I’m going to assume you enjoyed it (because I don’t know how you couldn’t). If you didn’t pick this up, then you need to. Gotham Academy is really the first book in the New 52 to just be about regular people. There is no hero. It shows how Gotham citizens react to the things going on in Gotham. And kids at a prep school, at that. Becky Cloonan and Brenden Fletcher do a great job of world building, and at the same time they don’t stray from our main character, as we are still getting to know her.

Karl Kerschl’s art is so perfect for a project like this. I really hope he stays on the book for a long time, and that we don’t need too many fill-ins. If you’ve seen his past work, you will enjoy it here, but he also seems to have added a bit of anime style. A less is more type drawing, with exaggerated features, and of course, everyone has crazy awesome hair.

We open with our main characters, Olive and Maps. We will follow Olive through the course of this. They are both at Headmaster Hammer’s office, and he explains that Olive will serve as Maps’ “nanny”, as she is new to the school.

Before we get started, here are some bios:

Olive – a sophomore in Gotham Academy, who would trade lives with anyone at this point. She hates the person she’s become in the past year, but maybe Maps can help bring her out of this slump.

Maps – a freshman in Gotham Academy. Is like the little sister you had, that would never shut up.

Headmaster Hammer – an old man who has been overseeing Gotham Academy, at least since Bruce Wayne attended there.

Kyle – Maps older brother. He and Olive are dating, but she’s trying to find a way to break it off… Way to make things complicated.

Olive’s roommate – hasn’t gotten a name yet, but I’m sure she’s important.

Olive  and Maps make their way into one of the buildings in the pouring rain, when Olive is knocked over and picked on Pomeline.

In class, Olive kinda zones out while learning about the Cobblepot family in Gotham History, when Colton throws a paper star at her, and Pomeline flips her off in a subtle way.

At lunchtime (they have much better lunches than I had), Olive does her best to avoid Maps and her brother Kyle. She noticed Colton trying to make a sell in the lunchroom, and knocks his bag over, exposing the fireworks inside to a teacher, getting him in trouble.

In her room, her roommate is getting upset that she’s doing all the cleaning. But Olive doesn’t hear her. She hates who she’s becoming. She misses her mom. And she rips the picture of her and Kyle in half.

She makes her way to Maps, who got her feelings hurt for being avoided. Olive says that the assembly is about to start, and they can check out the creepy, rumored “haunted” parts of the chapel, if she wants to. They make their way up the chapel as Bruce Wayne gives a speech. They see the Batsignal, which Olive hates, when Maps falls from the top. Olive saves her by using the bell rope (which alerts everyone in the assembly) to swing down and save her… just like Batman.

Olive makes her way to her room, to hear her roommate screaming and hiding under the bed. She says she saw a ghost outside their window. Olive looks, only to see the Batsignal instead. (There are two posters up on the wall, here, one listing “Karlo” as one of the actors… Thought that was neat.) Olive comforts her, as we see a crack in the wall with a green eye peering at them.