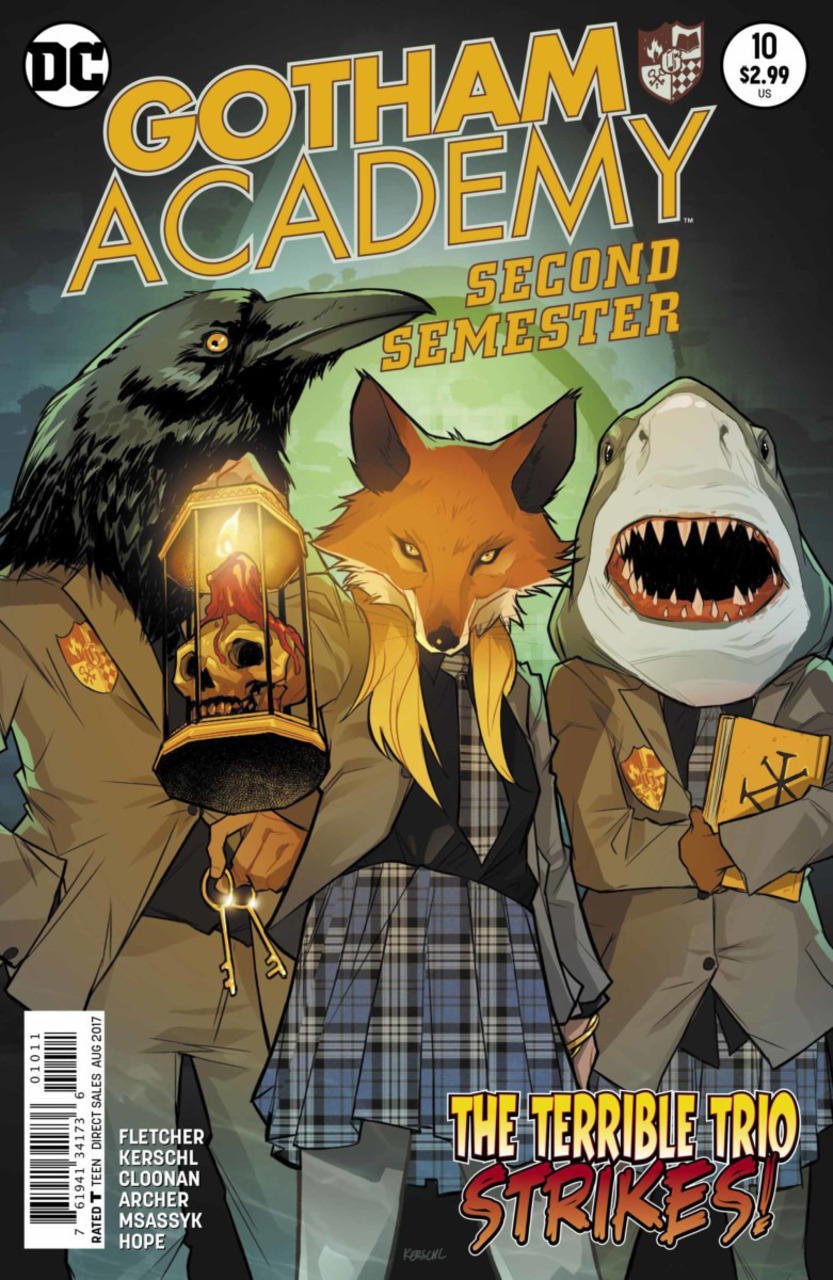 Amity Arkham continues to lead Olive onto a frightening trail of destruction. Two-Face manipulates the situation and the Detective Club uncovers an old secret in Gotham Academy Second Semester #10.

The Story (spoilers ahead): Penguin is at the Iceberg Lounge when he hears Amity Arkham call his name. Amity/Olive attacks him with hands of fire and tells him to beg for his life. Two-Face, Harvey Dent, is manipulating Amity to get revenge on Penguin for ripping him off on a deal for the Gotham Docks. Olive struggles to take control of her body and Penguin takes the opportunity to try to drown her. However, he mentions the name Millie Jane Cobblepot which brings Amity to the fore again. Penguin says that Bruce Wayne has all the answers about what happened to Millie Jane in his vault.

Back at Gotham Academy, Pomeline and Colton search for Maps who has run off to save Olive. The pair go through Maps’ papers looking for clues. They find maps with the word VOS on it and a paper that identifies Ambroos Lydecker as VOS, which means ‘fox’ in Dutch. Since one of the Terrible Trio was wearing a fox mask they realize there is a connection.

Maps is looking for the lair of the Terrible Trio, three students who don animal masks and are somehow involved in Amity’s return to Gotham. Maps finds a hidden room where the Trio are meeting. She says that she wants to join their club. Maps must go through an initiation if she wants to be a member. She must walk out on a stone gargoyle on the side of a tower and retrieve a flag. Maps names the Fox-headed Trio member as Amanda Lydecker, the descendant of Ambroos Lydecker an old-timey Gotham architect. Maps succeeds in getting the flag from the gargoyle’s mouth but the trio pull out fencing foils which trap Maps on the stone monster head.

Two-Face is encouraging Amity/Olive to fry Penguin but Kyle rushes in and attacks Harvey. Harvey is no match for the athletic Kyle. Penguin grabs Amity/Olive which angers her into exploding with fire. Olive takes control of her body and sees that Kyle has been badly burned by the outburst and she attends to her ex-beau. Kyle says that he had to find her because he loves her. Penguin and Two-Face fight and Olive and Kyle are able to leave go back to the school infirmary.

Pomeline and Colton have followed the clues they found in Maps’ closet to the base of the tower. They see Maps on the gargoyle in trouble and head up to help their friend. Maps isn’t in need of rescue however, she has a Batarang handy and uses it to rappel off the side of the tower to safety. Pomeline and Colton reach the Trio and have them trapped. Amanda orders her compatriots to threaten Poms and Colton with their foils but Colton has a real sword. This is too much for Shark and Crow and they surrender. Amanda is able to escape however.

Maps, Pomeline, and Colton get the news that Kyle has been injured and hurry to the Infirmary. There they find Olive who blames herself for Kyle’s injuries. Maps kneels at her brother’s bedside with concern and anger. Until next time…

The Breakdown: Kyle is the man. Sorry, that just slipped out. Writers Brenden Fletcher, Becky Cloonan and Karl Kerschl haven’t explored Kyle’s butt kicking side, but it is great that they have now. We have known all along that Kyle has been mooning after Olive, but this sudden transformation into a man of action is refreshing. There is a tendency for the introverted characters in Gotham Academy, like Kyle, to come across as moody and one-dimensional. Seeing him punch Two-Face in the jaw saying “Get away from my Girlfriend” was satisfying. It isn’t clear where Two-Face is in the spectrum of Gotham fighters, but it is clear that we have someone in the Detective Club that can take care of business.

The pencils are by Adam Archer and inks are by Sandra Hope. This is the solid art that we have come to expect on Gotham Academy. Penguin looks odd at times, but his design is consistent and is unmistakeably Penguin with our without umbrella. The colors by MsassyK is uncharacteristically muted. We don’t have as much of the vivid fire pages that we have been getting. We get more gloomy rooms and foggy hillsides than usual and the overall effect is not as stunning as we are used to with this title.

The title page is one of the exceptions. It depicts Amity/Olive about to blast Penguin with a fireball. It is clearly and dramatically rendered and Penguin looks like he is in big trouble.

My Take: As anyone who has read my Gotham Academy reviews knows, this is my favorite comic. With it ending in only two issues I find myself yearning for certain things before it all comes to a close. The first and most important is for Olive and Maps to be best of friends again. This whole ‘Semester’ has been fraught with relationship issues between the two and now it seems that Maps is going to blame Olive for hurting her brother. I hope we can get past this quickly. These two friends is one of my favorite relationships in comics and I want it to be all OK.

I didn’t realize how much I wanted Kyle to kick butt, but I apparently have all along. I wish that this was done earlier since the Detective Club’s rivals could have used the occasional fat lip. Kyle and Olive are going to get together again I hope.

Finally, I was a little frustrated with all the back and forth over who was in control of Olive’s body. It was overused as a device to get Olive in and out of trouble.

This is a great comic book, but this issue wasn’t its best. There have been a few “I just happen to have exactly what we need to get out of trouble” scenes over the last few issues (I’m looking at you Colton) which has been disappointing. However, I expect this is just a bump in the road and I am hopeful we are in for a pair of exciting issues in the Gotham Academy finale.