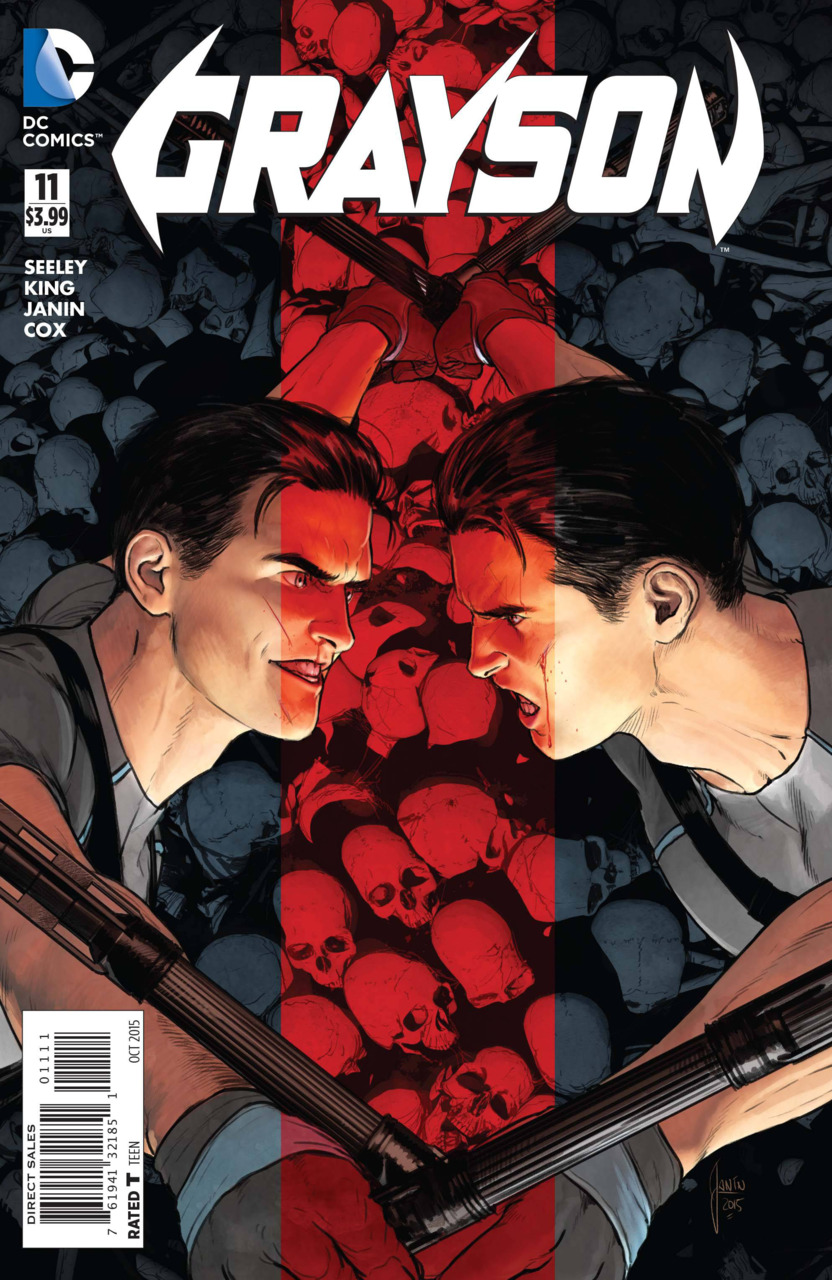 Well King and Seeley’s first multi-part story has come to an end. And it was amazing. I’m so glad that King closed out the story with the writing credit, he seems to be the stronger writer out of the two. Seeley’s middle issue in this arc was the one that fell flat. King has done great capturing the voice of Dick, but he’s also done great character work, and keeps an interesting plot rolling. By issues end, there are so many questions that have been answered, yet so many more that are brought up. I feel like I say this every week, but it’s awesome that I get to review some of my favorite comics for The Batman Universe. Anyways, if you aren’t reading this, you should be. It feels like an amazing TV show that everyone would be talking about.

So we pick up right were last issue let off, with “Dick” beating the snot out of Agent 1, telling him to tell Director Bertinelli. Just when he’s about to deliver the killing blow, Dick shows up, and says he doesn’t usually see himself from behind but doesn’t really know what all the fuss is about.

He begins fighting himself, and in true Dick fashion, is talking so much so as to create a distraction. He takes a few guesses. First, Clayface, but then he’s not oozing, so it can’t be him. Then he guesses Wonder Woman… Just messing with them at this point. But “Dick” turns the tables on him, asking him who he REALLY is; Robin, Nightwing, Agent 37, or Batman. “Dick”gets the upper hand, as this throws Dick off guard. He then begins taunting him, as Dick grows unusually quiet. He brings up Jason’s death, when Barbara was shot, when Damian died… When he had to fake his death. When Agent 1 died, what did he tell Agent 8? Dick grows angry, and comes to attack him again, but “Dick” tells him to stop, and he involuntarily obeys. He tells Dick to throw his stick at Tiger, and he does so. “Dick” explains that the Hypnos implants allow him to gain control of him like this, as well as effect how others see him. He whispers something in Dicks ear, and it knocks Dick out. Tiger comes to, and tears the Hypnos implants out of his eyes to see who it really is, and it’s….. Agent 8?!

Dick and Tiger meet up with Helena later, and explain to her what happened. Tiger lies about it being Agent 8, and blames Maxwell Lord and Checkmate instead. Dick announces that he’s done, and storms out. He goes back to his room to message Bruce. And although he still doesn’t answer, Dick tell him that he’s done and he’s coming home.

We see Agent 8 talking to Dr. Netz. She explains how she convinced Tiger to lie for her, and she’s happy their plan to drive Dick away worked. Dr. Netz also explains how she and her sister – Agent Zero – were always fighting each other, the only difference, their father isn’t yelling at them to fight harder.

So Agent 8 AND 1 are double agents?! Is there now going to be a war against Spyral and Checkmate? Dr. Nets and Agent Zero are sisters, I wonder if Zero is still Kathy Kane, like I thought issues back? An upcoming issue teases Dr. Netz father… The founder of Spyral, how’s that going to play out? And Dick goes back to Gotham. It mentions Bruce, Alfred, and Barbara in particular… How’s that going to work, and is he not going to come across Gordon Robo-Bats?… So many questions!