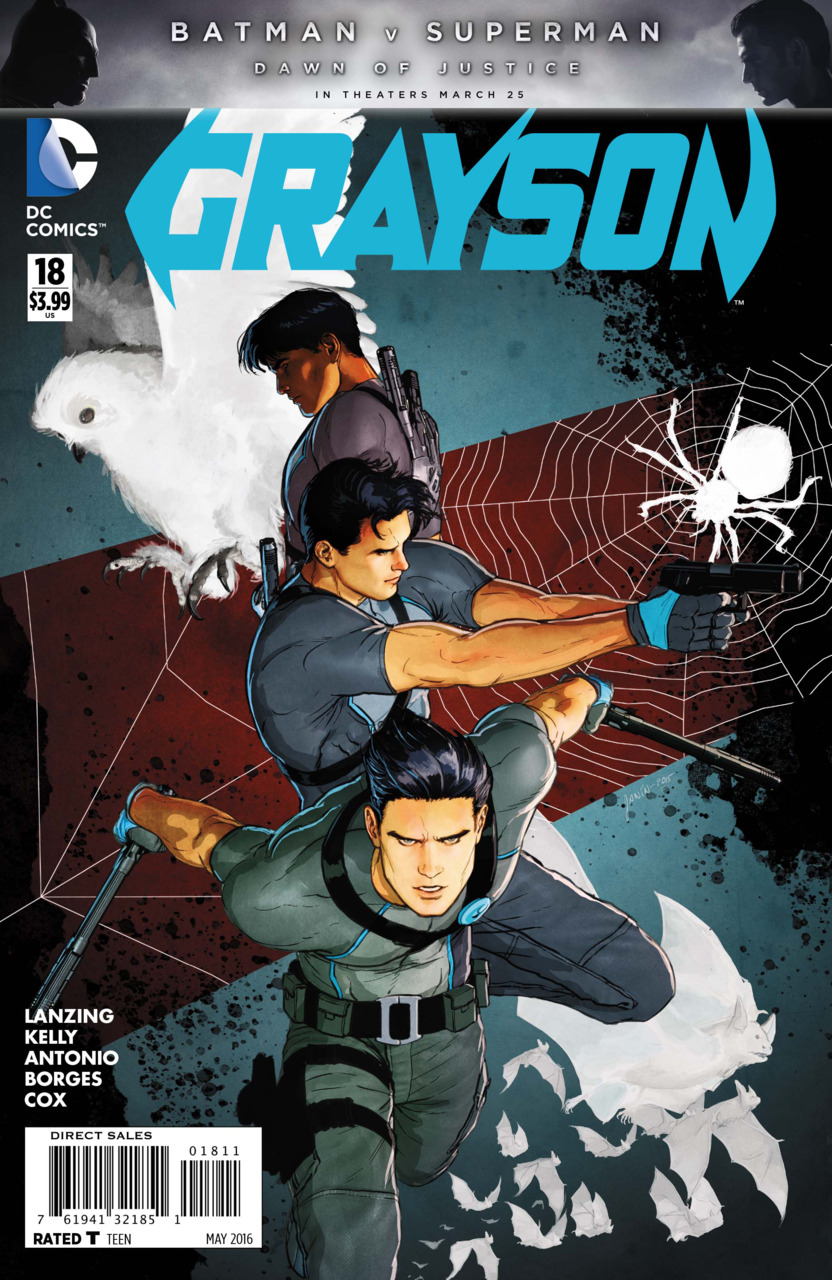 Breakdown: Jackson Lanzing and Collin Kelly do a solid job maintaining the tone and style left from the previous creative team. Even though this creative team ended up jumping on a month earlier than expected, they managed to make this issue feel important to this chapter of Dick’s life. It still has twists and turns, action, and the humor it has been known for. The story does feel a little busy, but with just a few months before the series ends, I understand why it could be that way. These guys do a great job maintaining the character of everyone in this book, and that did impress me.

Roge Antonio and Geraldo Borges have a tall task ahead of them filling in for Mikel Janin. These guys were paired with these writers for a few issues of Batman Eternal, so if you read that, you know what to expect. These guys work well together, but if you’re looking for it, you can see the style difference between the two… Now, I don’t know who is doing what, but I can see it. One has a style that reminds me of Rafael Albuquerque, but with a bit smoother line work. Personally, I think Albuquerque is a bit more refined, but I can see a similar structure. The other artist does a bit more linework in the face, and I don’t like it as well, but it gets the job done.

Jeromy Cox is keeping things consistent for us. His bright color palate is still present here, making any changes in art easy to adjust to. His colors do seem to pop more with this style of art as opposed to when paired with Janin.

Carlos M. Mangual’s letters are solid, as usual. I didn’t get lost, or distracted at anytime. I do like that all the characters understand the Asian speaking character, and respond to it in English, even though most of us don’t know what they are saying. It added for some fun comic-relief.

Recommendation: If you have been following the story of Grayson so far, I think you should stay on board. If you’re looking to jump on board Grayson soon, you’re too late. Go back to the beginning, or wait until Nightwing launches in a few months.

Synopsis: Helena, along with some Spyral agents are trying to get to safety, as they fight off agents from multiple agencies who are trying to kill Helena. She gets surrounded, and outmatched when Dick and Tiger show up before the agents can kill her.

Inside, Agent Zero is trying to trick the “Skull Girls” into killing the rogue agents outside. At the same time, Dr. Netz has carried Helena’s beaten body into “The Web”, and they accept her body into the program, claiming that they will fix her up.

While Dick and Tiger fight the agents, Agent 8 fights off the Skull Girls, and blows away one of the buildings. In order to keep the agents busy, Dick invites Midnighter (who comes through a dimensional door) and he has some fun with the whole situation. While Dick fends off the Skull Girls, Tiger deals with Agent 8. He pins her down, and points a gun at her head, but it’s implied that he can’t pull the trigger, and he lets her go.

Agent Zero and Dr. Netz meet in the headquarters, and begin arguing who’s body their father will possess. The argument quickly turns into a brawl, when they are interrupted by their father, who has instead taken the body of Helena…

Closing Thoughts: I don’t know what this means for Helena. Is she of the Netz family, or did Otto just mess with us all? Also how is this going to effect Helena’s change to vigilante heading into Rebirth?… Hopefully there is a turn toward the end of this series that make sense for the characters, because I love the Dick/Helena dynamic… While on the TBU Comic Podcast – Dustin, Ed, and Stella may be arguing whether the Dick/Barbara or Dick/Starfire relationship is more intriguing… I’ll be rolling with Dick and Helena.