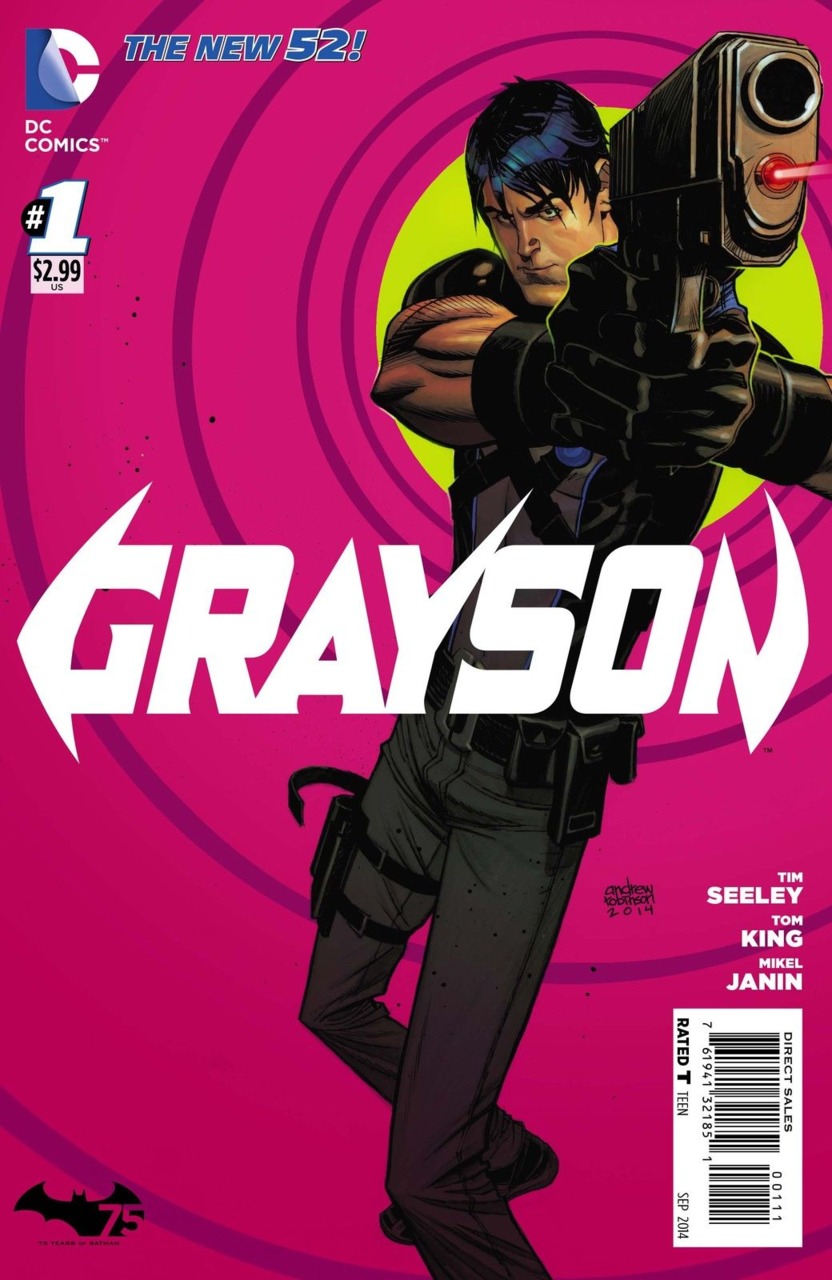 Well, Nightwing #30 left a bad taste in many people's mouths. In short, it was a disaster, and many didn't even want to pick up Grayson after that. I'm here to tell you, that issue #1 was freaking awesome!

Anytime Andrew Robinson does a cover, it looks great. I want to know what he's currently working on. Tim Seeley & Tom King worked out a wonderfully paced, and interesting script. We have twists and turns that add wonder, and keep you intrigued. Fans of James Bond will love this series, and hopefully it keeps up with this high paced spy-thriller.

Mikel Janin's art is awesome. I love how clean and crisp everything looks. It has realism to it, yet he somehow is able to keep things dynamic. Can you believe before this guy got into drawing comics, he was an architect? He's a very quick artist (never missing an issue on his JL Dark run), and he shows no signs of slowing down.

We open with a blonde Dick Grayson (looks like the Batsgiving poster was Dick after all) jumping onto a train as it goes through a field. He is attacked by a Russian agent, but takes him out with his gun… No, not by shooting him, but by throwing it at a beam, and ricocheting it off that and into his head, knocking him out.

Midnighter (from Stormwatch) is keeping an eye on this as it's happening. Dick makes his way into the train, and disrupts a fling between Ninel and a Russian agent by spilling wine on her dress. Helena then activates the paralytic agent that was in the wine, and knocks her out.

Dick looses the blonde wig, and gets off the train with Ninel. They are attacked, but escape into a nuclear silo. Here, we see Dick using Hypnos, a form of manipulation used by Spyral agents.

Once inside, Dick finds Midnighter, who is after Ninel. He figures out Dick is with Spyral, but Ninel protects Dick by BLASTING HIM WITH NUCLEAR ENGERY FROM HIS STOMACH. Ninel is about to attack Dick, but he is taken down and Dick escapes from the nuclear plant, and gets back to Spyral.

The head of Spyral, Minos, thanks Dick and Helena for their successful mission, and wishes them a good night. (Note: this dude has a weird spiraled face.)

Dick has a private dorm away from the main hall at the St. Hadrian's Finishing School for Girls. Dick is doing sit-ups, when he decides to give a report to his superior through a hidden part in his alarm clock. He radios to "Mr. Malone", awesome. When someone knocks on his door. Helena greets him, tells him how impressed she was with his use of Hypnos, and teases at a seduction. Informing him that she doesn't have to use it.

Minos has one of his agents performing diagnostics on the nuclear pieces they took off of Ninel. It is a part of the Paragon Protocol, and they receive the identities of two members of the Justice League… Cyborg, and Batman.

This was awesome. The spy element really has brought something new and fresh to Dick Grayson as a character, and for opportunities for new stories. As great as this comic is to new readers, there are also Easter eggs for long time readers as well. I really don't know how an issue can be any better and this intense from the get-go. I don't give out 5's very often, but…