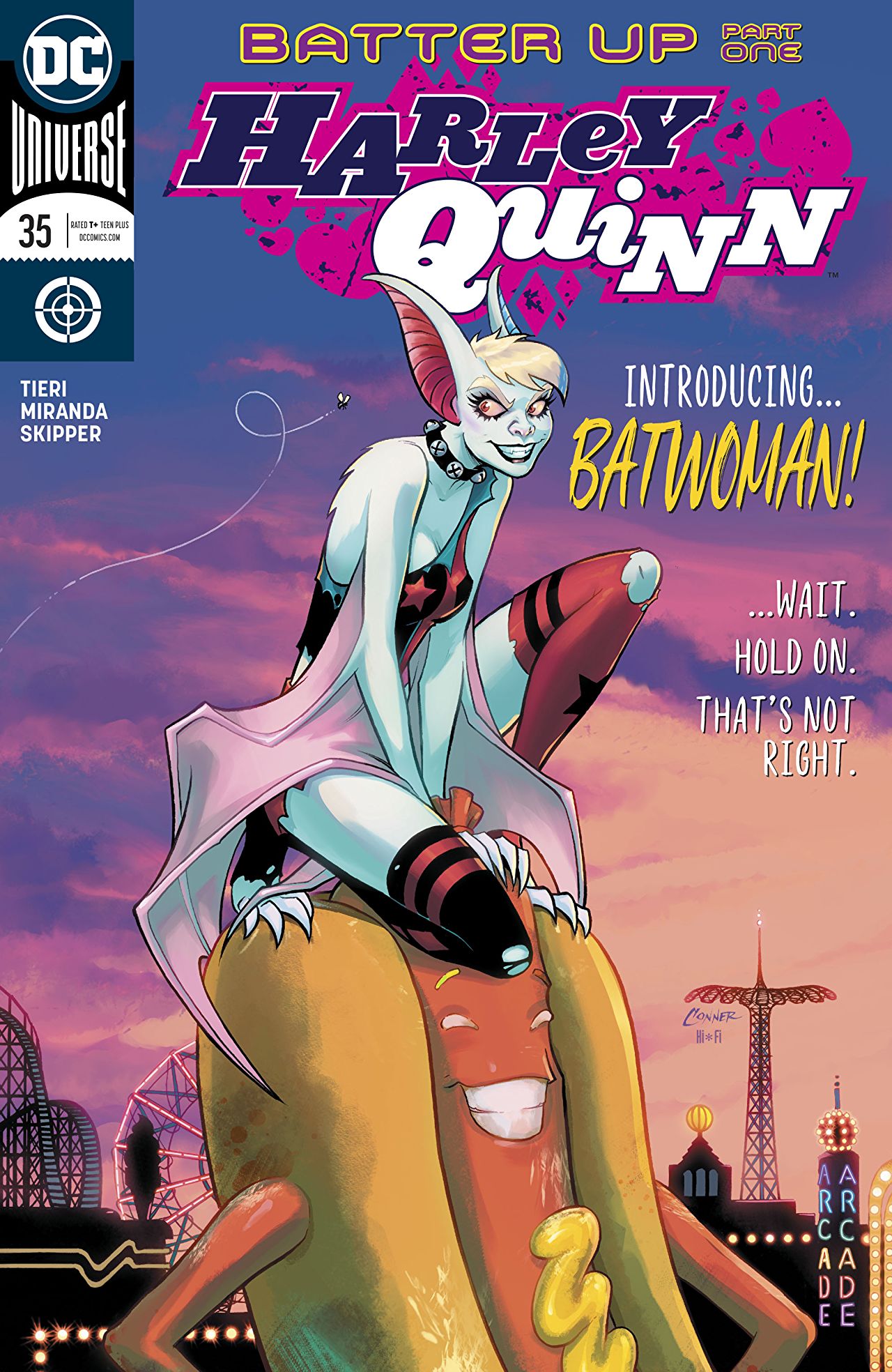 Overview: Harley wants to be left alone. All alone. But the gang just refuses to stop watching her, as Harley goes on a mission to track down Tony.

Synopsis (spoilers ahead): The action kicks off with a blast as Tony is leaving his local bar, bemoaning the distance Harley has put between herself and the gang since the events of the last arc, when a monstrous creature attacks him! Cut to Harley mooning about Coney Island, sighing. The Gang of Harleys are following her every step, in direct violation of Harley’s orders to be left alone. She quickly busts them and then discovers that Tony has gone missing. She quickly goes to the bar where Tony was engaging in head butting fights for free drinks, working off some raw energy as she dispatches some of the bar fighters. Having a conversation with a “fake homeless person” she’s advised that a large bat creature attacked Tony and this guy, who escaped. Red Tool meanwhile is covertly stalking Harley in the bar, whilst reporting into the gang.

Harley quickly busts Red Tool, who confesses that she’s Batman these days with the sneak ups! Red Tool and Harley leave the bar speculating on the existence and identity of this creature when an enormous Man-Bat style creature appears from the night sky!

Cutting back to the Gang of Harleys, they are following the lead of Red Tool before he lost contact with them, where he had mentioned large man-bat creatures. They have gone to Arkham Asylum following this lead seeking out Kirk Langstrom, Man Bat himself. There, Jeremiah Arkham informs them that Kirk is demented and has been confined to his cell for two years – there is no way he could be the creature that stole Tony…”there is another Langstrom” though, he intones.

Harley meanwhile is attempting to fend off the Man-Bat, who seizes Red Tool – she eventually overpowers it, and it changes back…to Tony! As Harley grapples with this, another man-bat creates comes down and catches her!

“Another Langstrom” turns out to be Kirk Langstom’s wife who has great control over the Man-Bat serum, and she injects Harley, turning her into a bat-thing!

Analysis: With a new creative team coming onto the Harley Quinn title following the departure of Conner and Palmiotti, the pressure was on for Frank Tieri and Inaki Miranda, a successful partnership themselves, to match the heights of the previous run which has turned Harley Quinn into an A list title.

Much to the relief of readers an no doubt DC, Frank Tieri hits all the right notes as he pitches a more solitary Harley, removed from her old gang and positioning this shift as the series moves on. Tieri skilfully pays tribute to the wider cast which was previously developed – the feeling in this book is one of Harley changing – and it follows as she literally morphs into a bat creature when injected at the end.

Matching the low-town beat, the art is deliciously murky as Inaki Miranda gives a darker, moodier take on the character of Harley and her locale. All the action takes place in night, Harley’s more isolated, she is more distant as she reels from the impact of previous events – she retains her humor but there’s a fresh edge. Watch this space.

Final Thoughts: An excellent start by the new creative team of Frank Tieri and Inaki Miranda. There’s a devilish love of the character and a cool, fresh tone that make this title a CONTINUED WINNER!