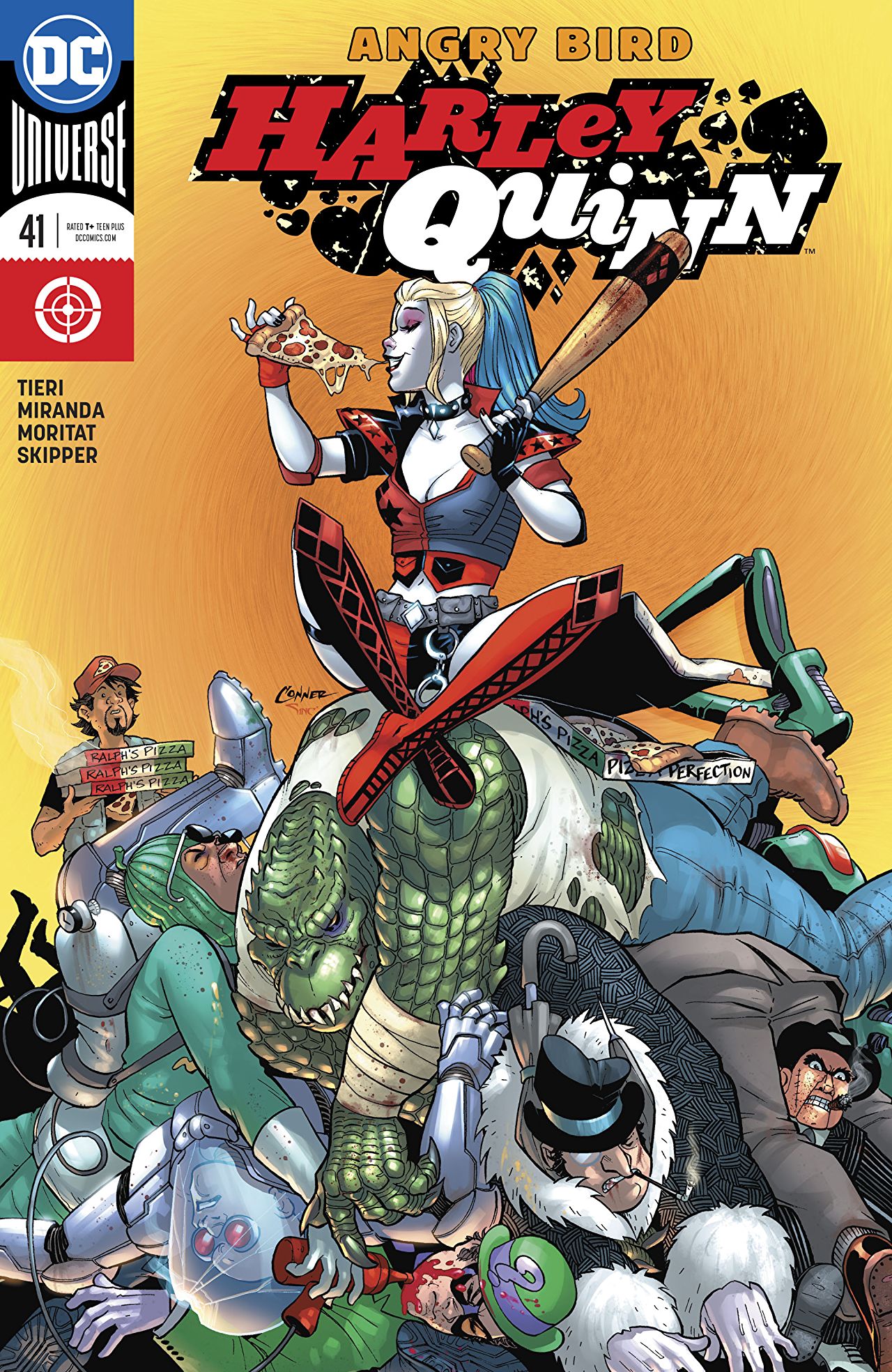 Overview: Harley returns to Coney Island to fight the Penguin, along the way making her friends believe in her again!

Synopsis (spoilers ahead): Mad Hatter is active in Coney Island as his brainwashing is working on the Gang of Harleys and assorted others. The affected attack the remaining Gang members who are not brainwashed – luckily when all seems lost Harley and Killer Croc swoop in, quickly dispatching Mad Hatter to the dustbin of history and breaking his control.

Unfortunately, Harley’s friends are not in a particularly forgiving mood – their reason being she surrendered to the Penguin’s truth serum being far worse than succumbing to Mad Hatter’s control, as Harley had subconsciously wanted distance from her friends. Ultimately, she wanted to leave, even before the truth serum. However, Harley quickly turns the doubters around with a heartwarming speech which even if it is a little obvious, is also very heartwarming. Harley is both a character and a book with a lot of heart.

Penguin rears his ugly head, thinking he holds the aces with an assortment of B and C list villains PLUS two giant penguins to take out Harley and her crew, but Ivy proves her worth once again as she shows to have control over giant plants themselves! Worst Kaiju fight EVER, Eggy exclaims! In the end, Harley’s band prove too much for the likes of Scarecrow and Solomon Grundy and Penguin is defeated. Harley returns to Coney Island, although she is reminded she had to cut a deal with Scarface and the Mob to take it back.

Analysis: From a story perspective, the payoffs at the end of this lengthy arc are not substantial. In terms of plotting, this would have to go down as one of the more predictable turns in recent memory – the redemption of Killer Croc was telegraphed at the conclusion of the last issue and despite a typically misleading cover it’s a relief to see him teaming up with Harley. Of course, we have been awaiting Harley’s victory.

The art is worth noting in this issue. There are two distinct styles at play here – Inaki Miranda provides the stylized, almost goth-like Harley we have seen previously throughout this run, but there’s entirely another flavor to the art of Moritat. I found this a slightly challenging but also curiously playful which meshed nicely into Harley’s more whimsical side. My only comment would be that the transitions do tend to be jarring at times and the tone is a bit all over the map visually especially as the book powers to a conclusion. Both are fine art styles by extremely talented artists but the combination of different artists (especially of such different tones) inside on relatively short book is something I’ve never been a huge fan of. That said, both these artists are powerful and I found myself wishing for perhaps a whole issue just ran by Moritat as we have not seen as much of this artist’s work on this title. At times the style reminded me of something you would see in a Peanuts comic strip, just in the character models, and that was an enchanting difference to the more stylized goth rendering of Harley throughout this issue.

Frank Tieri definitely has the voice of this character and I am saddened to hear that his short run is coming to an end. It always has seemed to me that not only is Frank Tieri a talented writer, with great turns on runs like Space Punisher, Black Knight, Catwoman, and Deadpool, he, for some reason, doesn’t have long runs on titles where he has been knocking it out the park. His Catwoman with Inaki Miranda was strong and I thought he picked up nicely from the formidable Conner-Palmiotti team and frankly was hitting a big ball her on this title. I’m not poring over sales figures or social media reactions to see what the market is saying but from my perspective, it’s a shame to see Frank Tieri moving on.

Final Thoughts: Overall another good issue of Harley Quinn – solid, interesting art makes up for a slightly predictable wrap-up to this story arc which has nevertheless been entertaining throughout. A cameo by Condiment King at the end is truly fun and cool! Harley fans are well serviced at the moment with this fortnightly title!