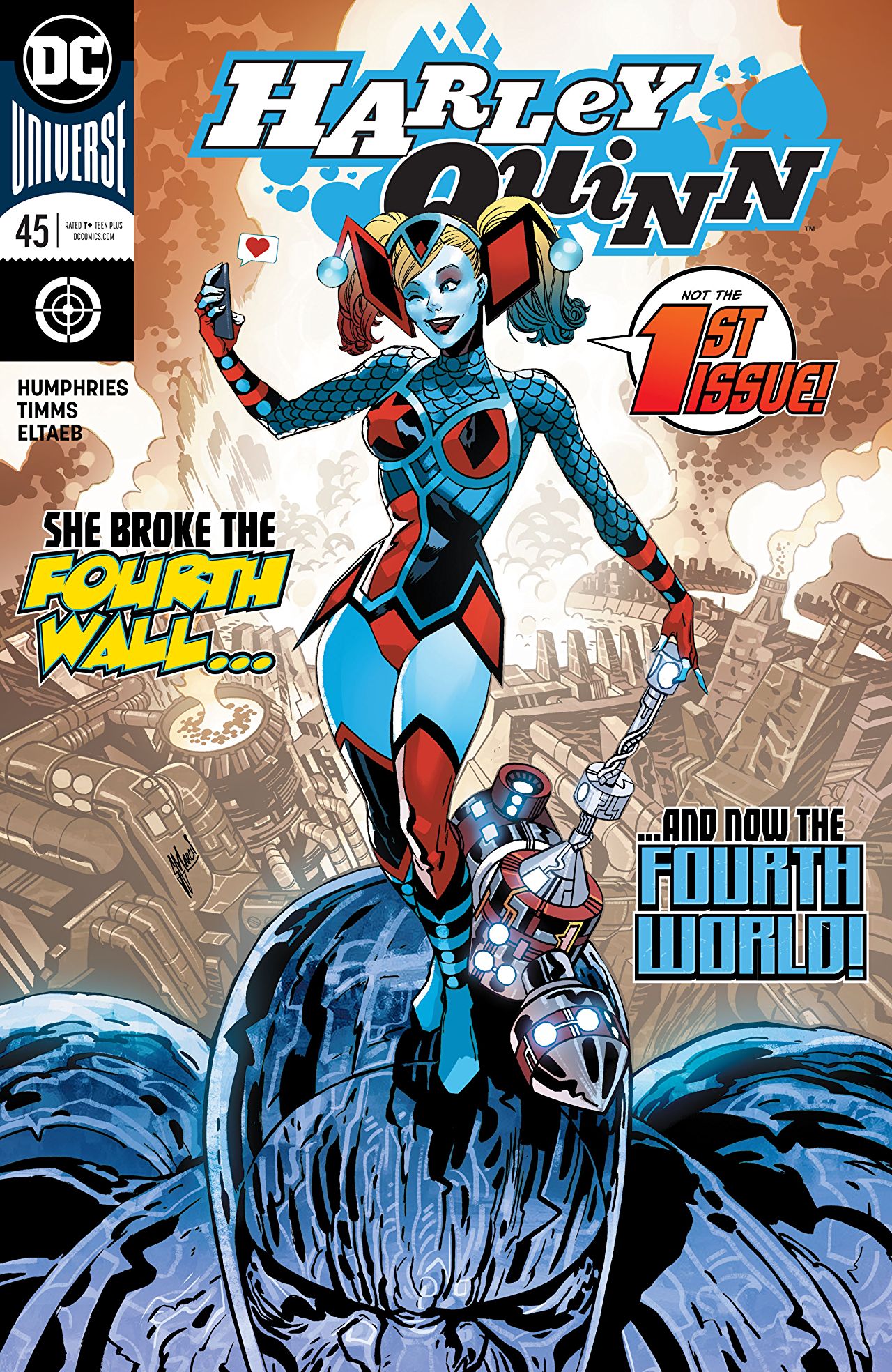 Overview: Harley takes a vacation from responsibilities and winds up on Apokolips!

Synopsis (spoilers ahead): Harley is on break from her life and responsibilities back in Brooklyn, having fun at the beach, and trying to ignore her mother who says she can run from her problems, but she can’t run from herself. As she hangs up, ignoring minor miscreants playing up on the beach, a couple of the Female Furies crash the beach scene, with Granny Goddess seeking Harley! Harley puts up some initial resistance but soon winds up blacked out and at the mercy of the Furies.

Harley wakes up in a bed, thinking her transportation from the beach has been a bad dream, but Granny Goddess is in the kitchen baking cookies! After a brief discussion about feelings and a life without responsibilities, Granny Goddess leads Harley out to the burning world of Apokolips and offers Harley a role in the Female Furies, assuming she can beat some parademons and get to the center of a death machine! With the help of a hammer, Harley does exactly that and soon enjoys the perks and privileges of being a Fury – “a hammer, a dig, and no rules! What more could a girl want?” she asks. But all is not sunshine and rainbows of hellfire, as Granny Goddess drags Harley away from a death-cage match (which Harley was enjoying) to go and find a criminal that Granny wants to be captured – one Petite Tina, who as Hartley discovers, is ANYTHING but petite, but rather a kind of giant with a large hammer/mace of her own!

Analysis: In so many ways, with the bright art palette and the heavy comedic turns, this issue is a return to the formula that the long-running team of Conner and Palmiotti established on Harley. A wise-cracking, fourth wall breaking Harley greets us, talking to her mom, and that is very much the tone for this issue. It’s light, throwaway and fun, in all the right ways. The art design in this book is AMBITIOUS in a way most mainstream comics just aren’t. The crazy, Kirby backdrop of the Fourth World and Apokolips is rendered in a cool way through some striking colour choices in the artwork, and as mentioned previously, there are some designs choices (such as in Harley’s flashback to childhood) and the transportation scene with multiple Harley’s crammed into a telephone box that speaks well of an ambitious and talented creative team. In no way at all does this issue feel like a phone-in, and indeed, it is amongst my most favorite of any comics I have read from Sam Humphries. Always a serious talent he shines in this one issue and I’m definitely looking forward to what feels like a two-parter on this tale. Nothing about this story screams “lengthy, slow-paced arc” but rather manic two-shot-and-done fun!

Turning to the issue of shifting creative teams, it is clear that DC has some kind of a plan on the Harley title. After Frank Tieri’s all too brief run, which skilfully cruised on the fumes of Palmiotti and Conner, we had an arc of a more emo-type Harley from a different creative team, which seemed to value a hint of depth over hijinks, to the more overtly comic and facial nature of this issue. Do they all work? Yeah. Are they proof there’s more than one way to skin a cat? Sure. But what it also speaks to is perhaps DC trying to figure out their next long-term move on what is still a very steady-selling title for them, and has been since the New 52. Are the shifting teams a way to keep the bench warm for a returning Conner and Palmiotti? Perhaps that is the case in the long term, but currently Sam Humphries is now the writer for the foreseeable future as per solicits. Whatever the reasoning at DC behind the shifts in creative talent, the changes are working, and Humphries is definitely supplying the overt comedy-drama with an emphasis on hijinks that has kept this book so fresh and vital for a number of years now.

Final Thoughts: A huge return to form for the Harley title and a great new approach by Sam Humphries and John Timms! One of my favorite issues of Harley in a while!