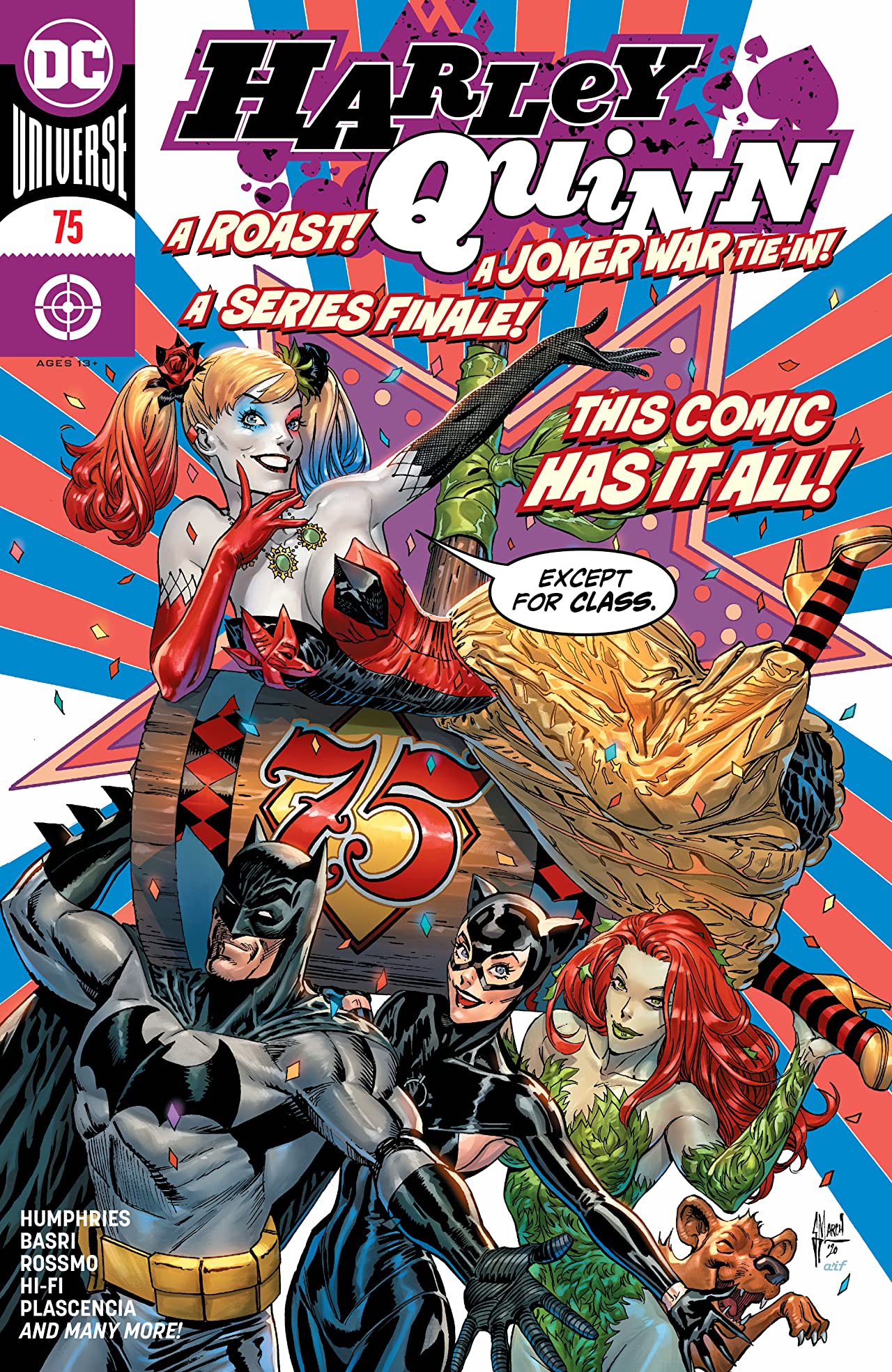 Overview: Sam Humphries brings his run on Harley Quinn to an appropriately riotous and surreal conclusion, with bonus Punchline!

Synopsis (spoilers ahead): Harley wakes up, tied to a chair, in a room full of Harleys, with her taxidermied beaver Bernie hosting a roast of her. She remembers that it’s her birthday and struggles to get free as the Justice League steps up to the mic and tells a silly tale of Super Harley trying to help the League defeat a huge Russian Robot, but accidentally setting off a nuclear explosion instead.

An outraged Harley sees that Poison Ivy is next up, telling a story of Harley trying and failing to sell chicken butt nuggets on Coney Island, with all of her wacky gang of Harleys coming in and ruining her plans, so she dumps poop all over them. As Harley continues to rage against the roast, Amanda Waller steps up to the stand and tells a story of the Suicide Squad, in which Harley’s shenanigans destroy the US government and leave Waller in charge.

Harley finally breaks free, but Bernie pulls off his mask, revealing that he’s just another Harley Quinn, as are all of the other people who have been speaking. While she processes this revelation, her mother appears, telling a story of young Harley, when her cat died, and how her feelings overwhelmed her. Sobered, Harley takes the mic herself, saying that she IS all of these “Bad Harleys” and that she wishes that she were a more confident, bad-ass Harley. She paints a picture of herself starring in her own animated series (metafiction alert!) and embraces both the good and the bad of herself, leading to all of the Harleys in her dream to turn into red and black balloons, floating away. She wakes up in her bed in LA, with Becca, the daughter of her dead friend Alicia (see last arc!), bringing her a cupcake and balloon for her birthday, and chooses to embrace the moment.

The backup story shows the aftermath of Harley getting her throat cut by Punchline in Batman #93, falling into the sewer, and battling near-death hallucinations until she decides to live and become the harder, readier version of herself we see in Batman #96.

Analysis: After twenty-eight issues, Sam Humphries brings his run on Harley Quinn to a close, and the book takes a bow as well (though Harley will no doubt have a new run very soon). He really pulls out all of the metafictional stops here, playing incredibly delightful games in exploring the different sides of Harley Quinn (something I myself have done in a Patreon cast this year!).

It’s a bit of a shame that though Humphries does reference most of his arcs, the most recent one, deeply emotionally draining and rewarding, probably is least represented. The tag with her friend’s daughter celebrating her birthday on a rooftop was lovely, but most of the issue was focused on meta-commentary on other parts of the run or other parts of Harley’s life. While I think it’s very nicely juggled, I’m a bit bummed that the status quo that Humphries set up with the last issue, with Booster and Harley exploring their feelings, and Harley moving out of her almost-death-wish phase of mourning, isn’t more vividly realized here. That being said, Humphries does leave Harley in a great place – metafictional, struggling with her trauma but headed in a positive direction – and gives us a meditation on all of the different sides of Harley that are prominent in media today. I very much hope that whatever writer gets to write Harley next will similarly take advantage of what Humphries did to expand her character range.

A small note on the Punchline story – this is more of a linking story between Batman #93 and #96, and it gives us classic Humphries Harley in the much darker world of main continuity Batman. Rossmo’s art perfectly fits this fusion, and though it doesn’t offer quite as much as I’d hoped in terms of Punchline vs. Harley (I was hoping for an out of continuity brawl, similar to the roast we got in Harley’s dream), it works like a charm anyway.

Sami Basri, the main series artist, handles most of the art, with dream sequences by Nicola Scott (Super Harley), Emanuela Lupacchino (New York Butt Nugget Harley, an homage to Amanda Conner and Jimmy Palmiotti’s run), Ramon Villalobos (Suicide Squad), Ngozi Ukazu (Harley’s mom), Joe Quinones (Harley the Animated Series), and Riley Rossmo (Harley vs. Punchline). It’s a stunning combination of artists, and most of the styles mesh extremely well – though Villalobos and Rossmo stick out a bit. Each section bursts with details, visual jokes, and artistic skill, so that on an art level alone, the book is a feast for the eyes.

Our main cover is once again by Guillem March, giving us Harley in a ballgown reclining on her mallet (labeled “75”), carried by a hilariously smirking Batman and Harley’s Gotham City Sirens sisters. Frank Cho’s variant offers a beautiful Harley vs. Punchline face off, with a humorously exaggeratedly serious backdrop of Death and Fate watching. The details in both really highlight both March and Cho’s strengths, and both would be excellent additions to your collection.

Final Thoughts: While not quite a grand slam, Humphries’ excellent run ends with a solid double or triple, possibly even a home run.