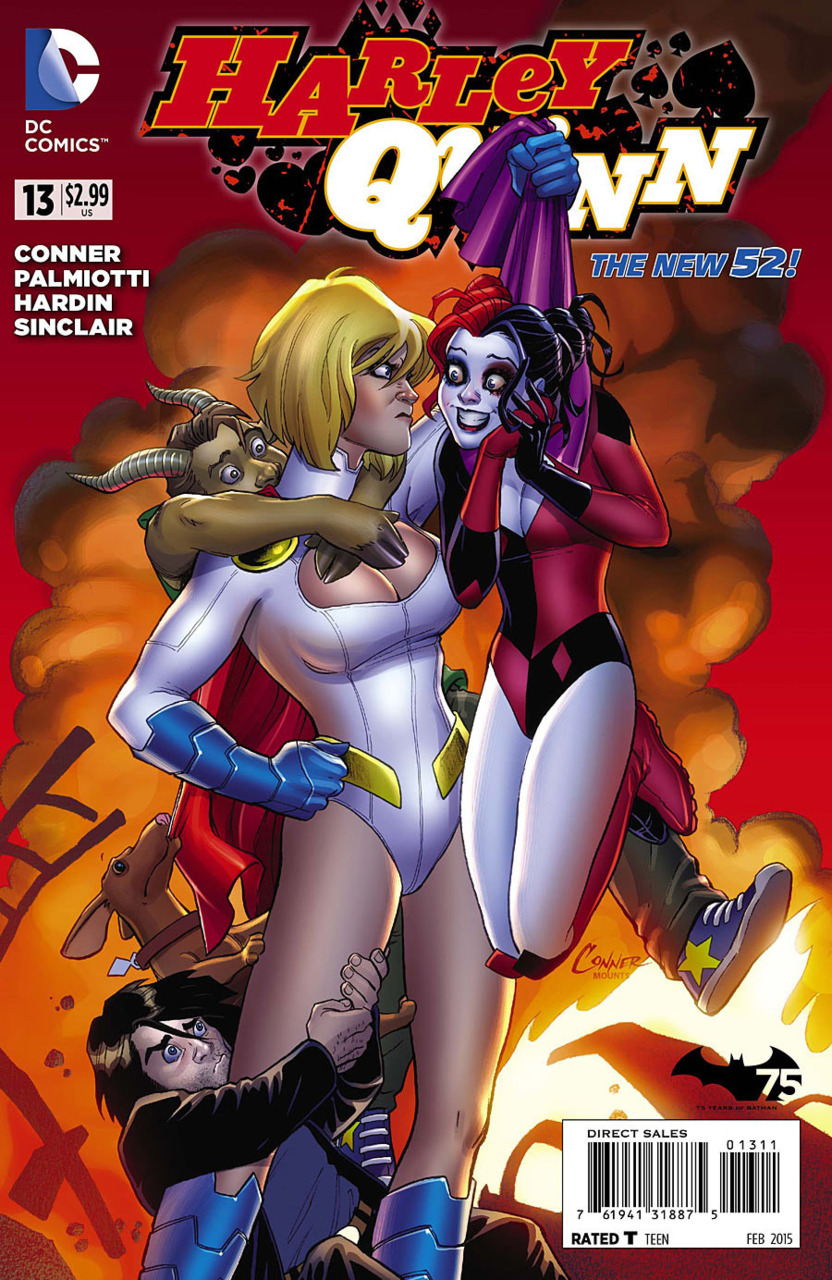 There are certain expectations that readers have for the Harley Quinn monthly series. Tongue-in-cheek dialogue, breaking the fourth wall with the audience, provocatively dressed women, and a wealth of off-color jokes. Although this has become the norm for DC’s beloved antihero, this week’s issue was particularly ripe with these clichés and quickly sucked out any enjoyment the reader may have found in this book.

Amanda Conner and Jimmy Palmiotti pen this issue as if they are two teenagers in the late nineties who are writing dirty jokes behind the bleachers in the school gym. This wouldn’t be an issue if they were working with a new character in the DCU. However, Harley Quinn is a character with a rich history that we have seen used very effectively in a plethora of DC outlets. The artists need to remember that although she suffered a psychotic break, Harley is much more than just an ass-flashing bimbo. Giving more depth to this character will help to ensure this series remains a viable book in the DCU for years to come. Now that we got that out of the way, lets dig into the content of the issue.

We open to Harley and Power Girl facing off with Clock King and Sportsmaster. Power Girl is still suffering her bout of amnesia and continues to aid Harley in her quest to stop evildoers. Power Girl is able to stop a nuclear attack from killing our band of heroes, however, in her absence Clock King and Sportsmaster are able to evade apprehension. This is easily the most enjoyable section of the book and unfortunately it is all down hill from here.

Comic books have a long history of presenting women in a manner that is over sexualized and exploitative in nature. However, rarely is it as tasteless and exaggerated as it is in this issue of the Harley Quinn series. The remaining pages of this book are littered with characters lusting after Power Girl. Furthermore, Harley uses her assets (pun intended), in order to stop a mugger from shooting her in Central Park. All of these antics feel cheap and insulting to the intelligence of the reader. I would like to see these characters represented as strong women who just happen to be beautiful and not vice versa. This is not to say that the off-color jokes don’t have a place in the Harley universe, the writers just need to use them in a more effective manner. We wrap up this month with Power Girl regaining her memory and almost killing Harley for lying to her all this time. After one more poorly placed joke about sex we are left with Harley abandoned atop the Eifel Tower.

Since her origin in Batman The Animated Series, Harley Quinn has skyrocketed to become one of DC’s most popular villainous vixens. It is unfortunate that a character as beloved as Harley Quinn is treated with little to no reverence in this current series. Without a certain degree of change moving forward, I am confident that this is another DC monthly that will be unnecessarily cut short.