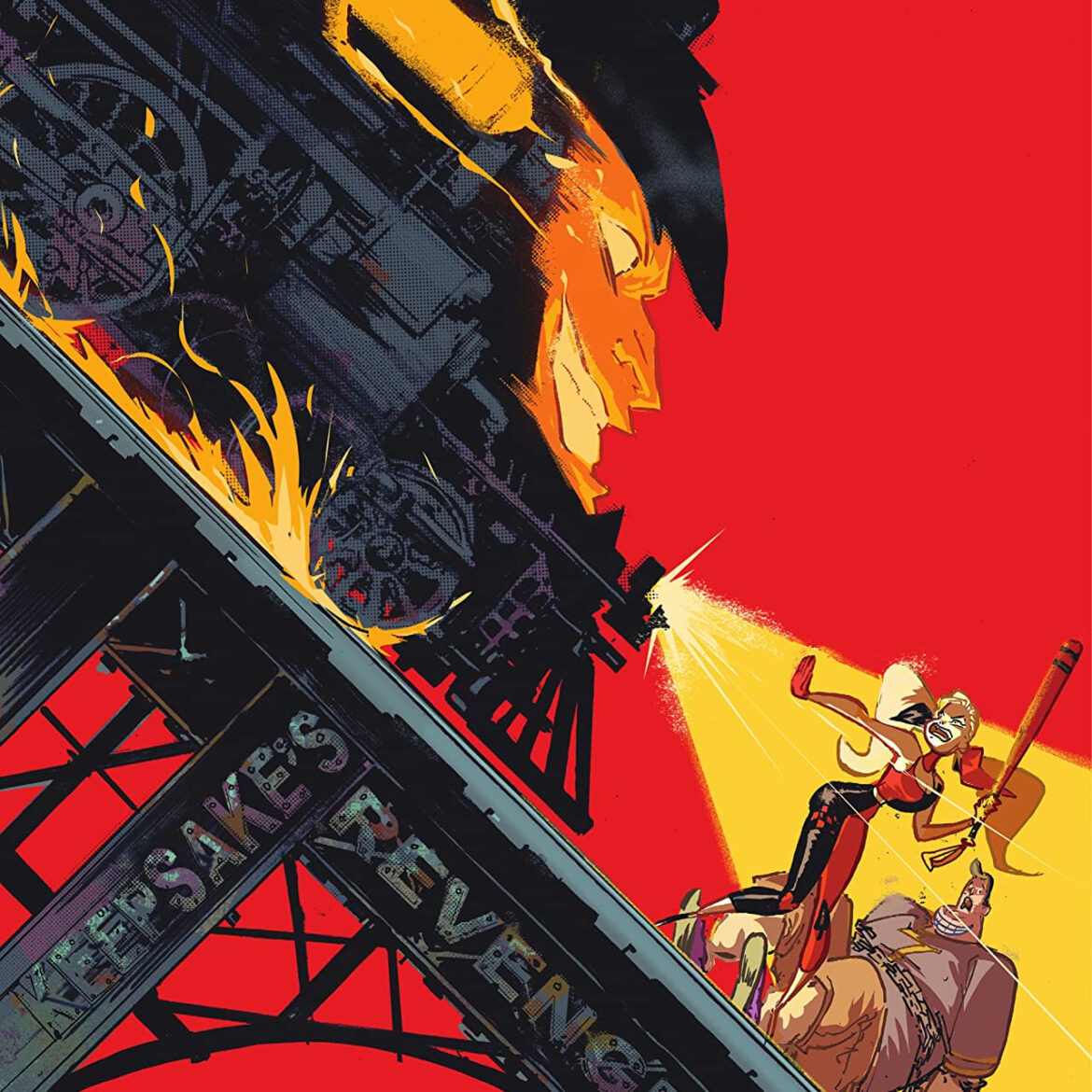 Overview: In Harley Quinn #11, Harley and Kevin act out a real-life trolley problem.

Synopsis (spoilers ahead): A train is speeding along, and our hero is hanging on underneath. The train has a bomb on it and is headed straight for Kevin, who is trussed up on the tracks like something out of a silent movie. Flashback to earlier in the day when Harley is running one of her reformed criminal’s group therapy sessions. Blaine is sharing, and Harley admits that she does not know why bad things happen to decent people, especially in Gotham. The room is full of Keepsake’s former “Caucus of Corruption,” and Harley validates and affirms.

The session ends, and Harley calls Kevin, who did not show up, which is unusual. Harley steps outside and sees a note on the doorstep from Keepsake declaring that he has Kevin. Harley rushes off to an abandoned train station outside of Gotham. Keepsake is there with repurposed Peacekeepers leftover from Fear State. He and Harley banter before Keepsake explains that the train sitting on the tracks is equipped with a bomb. Kevin is affixed to the tracks two hundred miles away, and the train can only go in one of two directions – to Gotham Central or right down ‘Kevin Lane.’ Harley mocks Keepsake for staging a real-life trolley problem and sets about demolishing the “Keepers” with her bat.

A giant boss-level Keeper emerges and subdues Harley. She finds herself handcuffed to the speeding train. Keepsake taunts Harley over a monitor, which enrages Harley, and she frees herself and pulls the lever to the “Kevin” side. The scene switches to the darkened group therapy room. Blaine walks in to retrieve her phone and sees Keepsake’s note. She is enraged.

Analysis: Harley Quinn #11 presents a nice contrast to the last issue. Whereas issue #10 slowed down the frenetic pace to explore some long-awaited aspects of Harley’s relationship with Ivy, this issue picks back up and includes a speeding train. I appreciated many of the classic tropes writer Stephanie Phillips deploys and situating Harley in the midst of a real-life trolley problem is a nice touch. For the record, as someone who teaches trolley problems in ethics courses, I do not agree with Harley’s critique that trolley problems necessarily require ignorance of larger structural problems that create such conflicts, to begin with. There are many ways to teach and think about trolley problems that integrate structural concerns.

In my comic dreams, I get to sit down and argue about this Harley. Or Phillips. Or both!

Keepsake remains a rogue unworthy of Harley’s talents, although here he comes closer than he has to genuinely challenging her. Artist Riley Rossmo’s art is what it is; it suits the book but not my aesthetic. Derrick Chew’s variant covers are consistently excellent, with this version featuring Harley soaking up adulation as a rock star on stage being a particularly high-quality effort. Harley is nothing if not a rock star!

Although it would be difficult for #11 to soar as high as #10, this remains a solid, well-crafted book with thoughtful dialogue, a fascinating and complex Harley, and plenty of laughs.