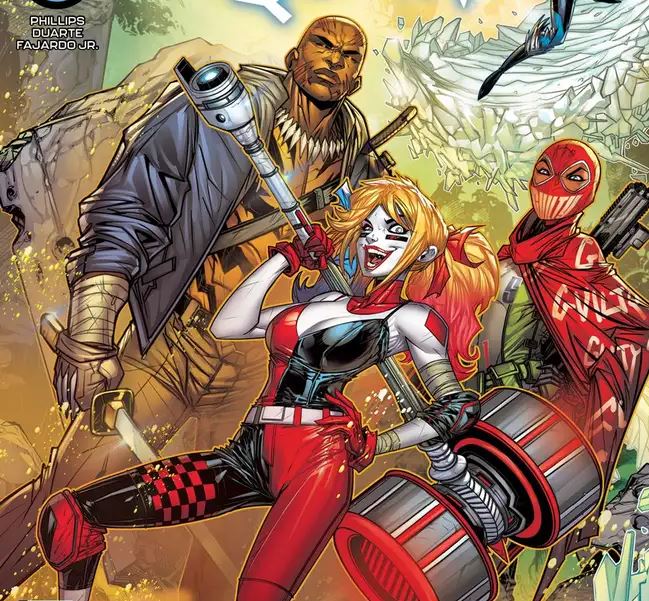 Synopsis (spoilers ahead): As Harley Quinn #21 begins, the military police controlled by the Element X-Thing are hunting for Luke. Luke drops down on them from above, and the creature taunts Luke as they battle. Luke flees into the cave, but the Lashina-Grundy-Thing is waiting. We hear Luke’s inner monologue as he considers his relationship with Batwing. He enters a room via a fingerprint scanner.

Back on the moon, Task Force XX considers using the teleporter to get back to earth. Harley figures out how it works, and after some argument, the team uses it. They are surrounded by the military police, and the Grundy-Lashinsa-Thing orders the attack while it goes after Luke. The police get the upper hand until they are zapped into unconsciousness by Luke in a costume that is not Batwing.

Back at the lab, where the security will keep them safe for a time, they discuss what has transpired. Harley compares Luke to a “poo Roomba,” i.e., the situation in which a robot vacuum smears dog waste. Luke stalks off in an effort to come up with a plan. Harley follows, discussing her dissertation on personality, which Luke has actually read. Harley encourages Luke, and he returns to the full Task Force with some untested weapon upgrades.

Luke has heard Harley; his inner monologue shows an understanding of her main point: He is more than the logo or the costume he wears. He is also a product of the people with whom he fights. The team is ready.

Analysis: What makes this book sing is the conversation between Harley and Luke. It is deep without any cliché, showing Harley at her best. She continues to show her incredible capacity for introspection and self-analysis, acknowledging that she wants to believe in her own account of personality, at least partly because of what it implies about the authenticity of her own redemption arc.

Luke takes the point, and here we see a subtle theme that writer Stephanie Phillips has been building in the title: Harley is able to inspire others. She has real leadership qualities, and Task Force XX has grudgingly acknowledged them, to the point that even Verdict trusts Harley enough to go through the teleporter.

With Task Force XX and Harley back on terra firma, the Flash Gordon space adventure backdrop that worked less well can fade, and the character herself can shine. I continue to appreciate the break from artist Riley Rossmo’s style, and the Impressionistic ratio variant cover from Zu Orzu is incredible.

Harley’s character development is really astonishing, even framed within a story and a setting that is not the strongest.