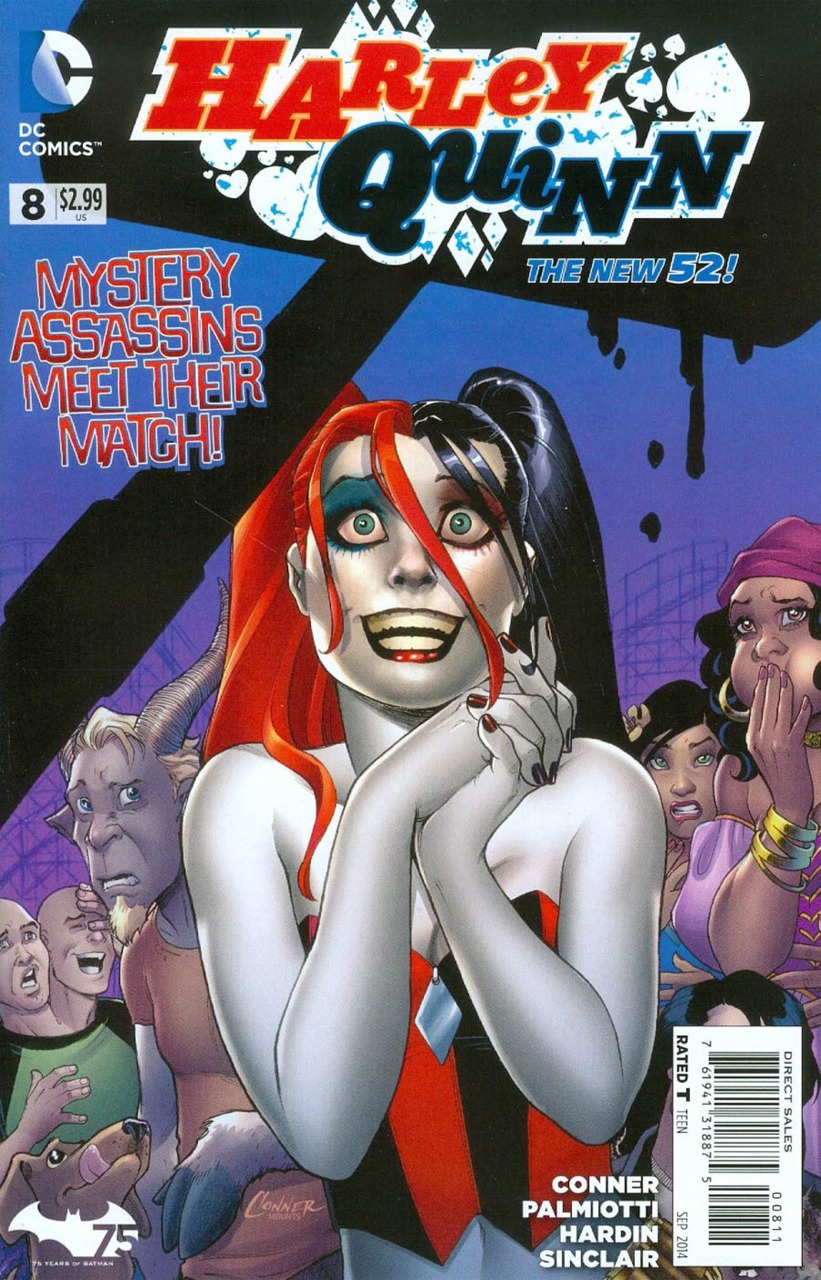 This issue kinda brings up some things that have been forgotten since #1, and I mean by me when I say that. And that’s not necessarily a bad thing. I’ve been having fun with this series. Again, it’s still the dark, morbid, poop humor that makes this book succeed. It continues to make fun of the medium & the company itself. I’ve heard a lot of comparisons to Deadpool and I can now say that I agree with that statement. Another fun issue by Palmiotti & Conner.

Chad Hardin is still doing the art here and continues to do a nice job. I would like to see someone else on the series, but the guy’s not bad, & he’s improved dramatically since beginning his work, here.

Harley & Big Tony are trying to cash in on the jewelry they stole from the assassins last issue at a local pawn shop. Sal (the owner) tells them they are worth $240k, but that they were reported stolen, so he gives them a low offer. Just then, some guys break in to rob the place, but Harley continues to try and work out a deal. He agrees to pay her $140k & a samurai sword if she takes out the robbers, and all is well.

Tony and Harley get a bite to eat and discuss how to spend the money on the apartments. She leaves it to him, and she heads off to work…

THE ROLLER DERBY! She has been a no-show the last few weeks, so she gets the name Killer Kwinn instead of the preferred Quinnzilla. Harley is kicking butt, until the opposing team releases a beast of a woman on her, who knocks Harley out cold. She comes to, grabs her mallet, and beats the woman with it. Harley is forced to leave the team, but the leader gives her a card to a secret “Skate Club”.

The next day, Harley has a giant Scatapult… which is a catapult… but for poop. After pelting everything in sight with a giant bag of poop and taking out another assassin, we see a man named Edwin watching Harley. He takes out a cop, puts on the uniform, and announces his coming to the reader. No idea who this guy is.

If you can learn anything with this book, it’s that you can get away with murder if you just be yourself.