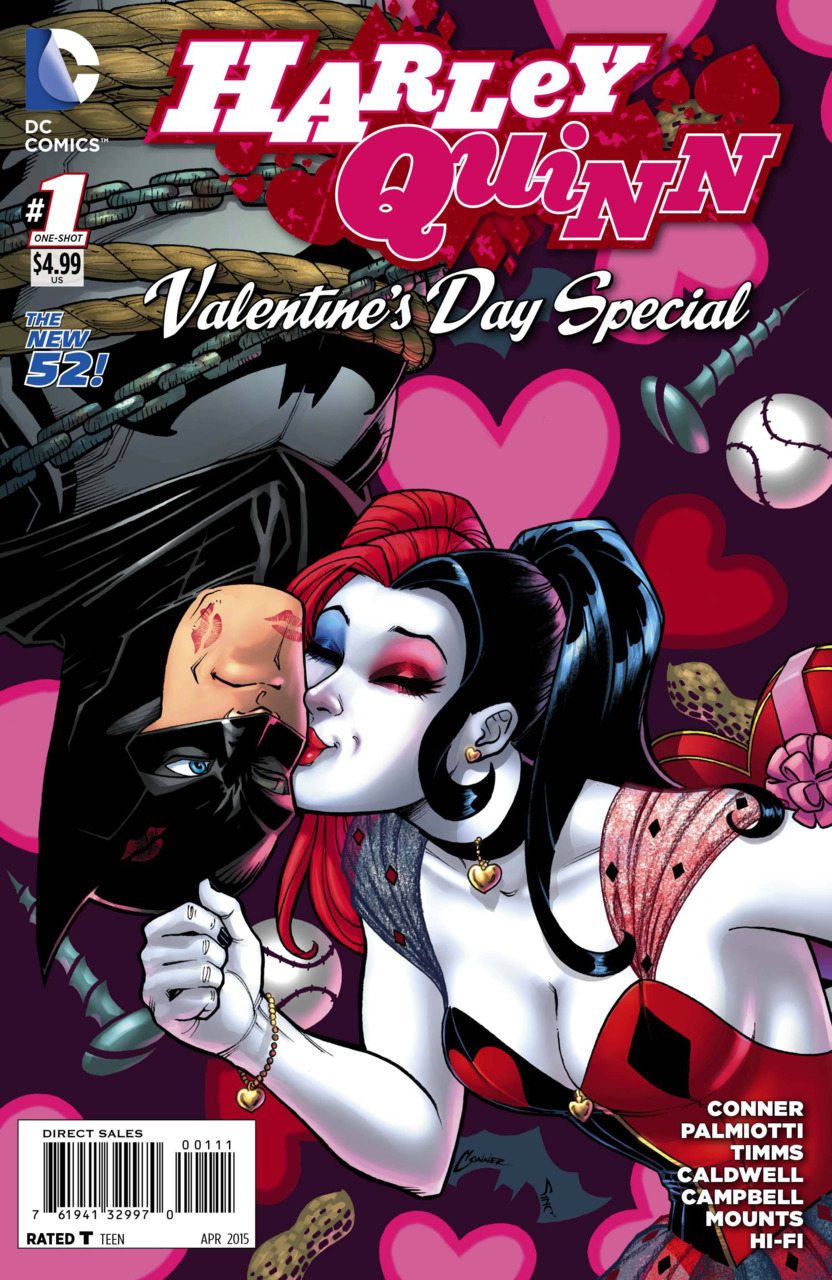 What would the holidays be without an accompanying Harley Quinn one-shot special? This week we join Harley as she attempts to make the best out of the world’s favorite holiday for lovers. This entry into the Harley Quinn mythos is a testament to Palmiotti and Conner’s ability to write and amazing stand-alone Harley Quinn story. I only wish that she would transfer this form of story telling into the monthly series. Regardless of the mediocrity that is the monthly series, this issue of Harley Quinn is exceptional on almost every level.

In the spirit of Valentine’s Day, Amanda Conner and Jimmy Palmiotti place Harley in a situation that only true love can concur – a date with Bruce Wayne. Although this premise may seem ridiculous on the surface, the writers prove that even the most unfathomable situations can be utilized to tell an exceptional story. Furthermore, the utilization of multiple artists over the course of the book keeps the issue feeling fresh and original.

The premise of the issue is simple; a date with Bruce Wayne is being auctioned off in order to raise money for the Wayne Animal Shelter. Being an avid animal lover, Harley is immediately drawn to the idea of a date with a man who has such a deep love for her fury friends. The pages in which Harley fantasizes about a life with Bruce were especially enjoyable. Although these panels are humorous in nature, the reader clearly sees the damage that her relationship with the Joker had on Harley’s psyche. In her dreams Harley is the object of her lovers affection, the antithesis of the objectification she received at the hands of The Clown Prince of Crime. This is definitely a Harley who now understands what she wants out of a romantic relationship.

Love does not come cheap. In order to ensure she has enough greenbacks to secure a date with Bruce, Harley enlists the help of Tony to steal a million dollars from a crooked financial advisor. The plan goes off without a hitch and our favorite antihero soon finds herself standing shoulder-to-shoulder with Gotham’s elitist of citizens. All is going according to plan when The Carp and his sidekick Sea Robin crash the party in an apparent robbery, kidnapping Bruce Wayne in the process.

Unconscious after being kidnapped, Bruce suffers a very entertaining dream. Bruce envisions Harley as his current Robin. The pages capturing this dream sequence are some of the most entertaining in the book. It was interesting that even in Bruce’s dream, Harley holds a strong and bitter distaste for the Joker. It seems odd that Bruce would dream in this manner, however it does help to establish Harley as an individual independent of the Joker.

With help from Poison Ivy, Harley is able to rescue Bruce from his captors. Within an hour of her goodnight kiss with Bruce, Batman confronts Harley. The dialogue between these characters is reminiscent of enemies who have come to an understanding of the role that each plays in the grand scheme of things. The issue ends with Harley informing Batman that he will never be as good a kisser as Bruce Wayne.

The Harley Quinn monthly series has been inconsistent at best. However, the holiday specials have been unfailingly top notch. The Valentine’s Day special excels in every possible manner. Seeing the writing ability in this special gives me hope that the monthly series will take a turn for the better in the very near future. Until that time, keep the holiday specials coming because they truly allow Harley to shine.