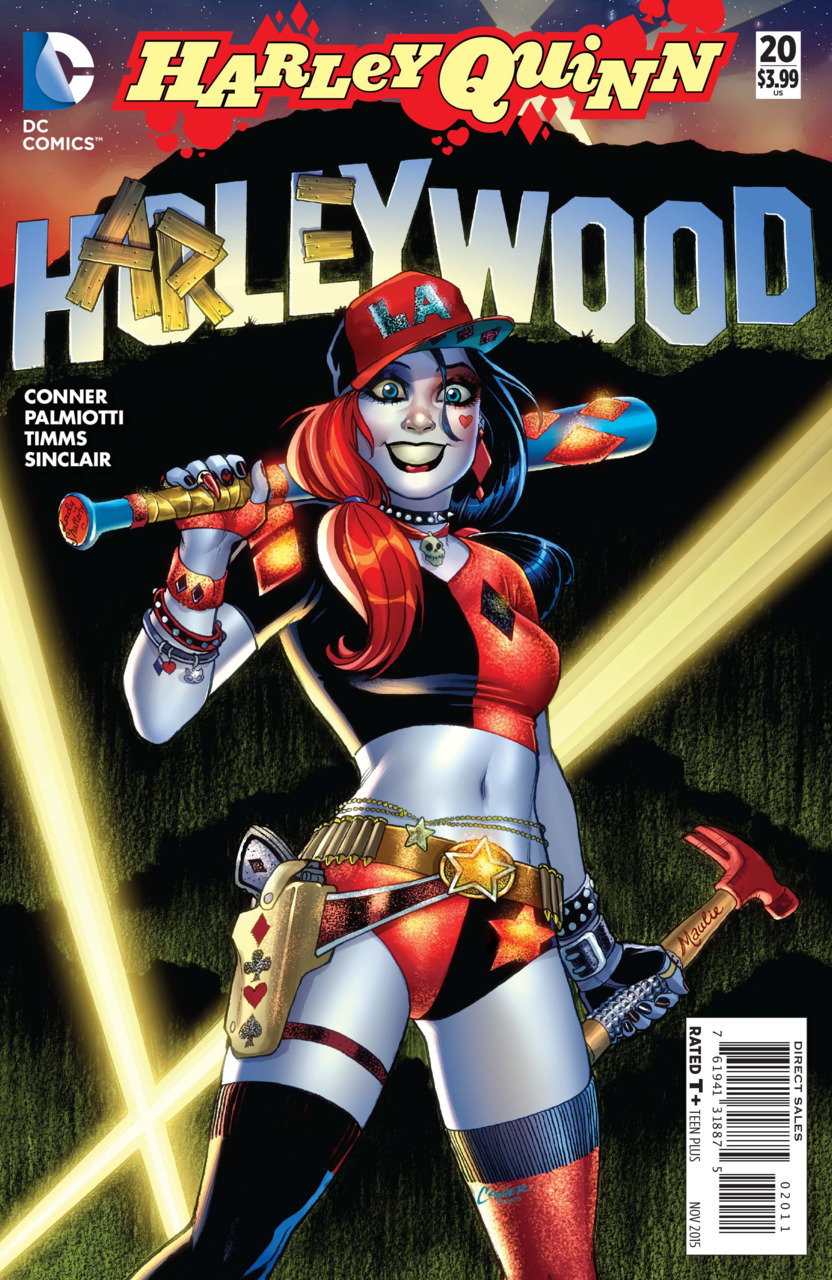 Harley heads to Los Angeles to rescue her client’s daughter from a cult. But also on the trail is a mysterious bounty hunter set on earning the dough himself in Harley Quinn #20.

Spoilers below really tie the room together….

The last time we saw Harley she was heading to Los Angeles to save the daughter of Mr. Borgman’s nurse from kidnappers.

En route, Harley is having a full contact nightmare aboard her flight to L.A. causing much consternation amongst her fellow passengers. Upon her arrival her bags are lost and the uncooperative airline employee learns a thing or two about customer service Harley-style.

Meanwhile, back in the Assisted living home Ms. Adaro is visited by the operative she originally hired to find her daughter and he is none too pleased at being replaced on the job. Ms. Adaro tells the shadowy figure that Harley took over the task. He announces that he is going to get the job back.

Harley arrives at the address the ransom notes Ms. Adaro received came from. There is a pool party going on and Harley finds her way to Nick, the owner of the house. Nick doesn’t know where Sparrow Adaro is but suggests she is at the Chateau, her new hangout. Nick emerges au natural from the hot tub and makes Harley a sandwich when three robbers break into the house. Harley does what Harley does to two of them and chases the third on foot. Her prey is hit by a cop car and impaled on a statue. The cops arrest Harley and put her in the back of their vehicle. Harley escapes the handcuffs, steals the car and heads into town.

Driving around Los Angeles she spies and picks up a guy dressed in full cowboy garb who she immediately takes a shine to. (The Cowboy is based on another character in entertainment. If you know who tweet it to @jpalmiotti). The pair find their way to the Chateau where another pool party is going on. They find Sparrow who apparently kidnapped herself. She sent the ransom notes to her mother hoping to pocket the cash to fuel her life of excess. At Harley’s request Cowboy shoots Sparrow in the foot and they take her to a cheap motel. The two leave Sparrow tied to a chair while they go out on the town, meet some creepy cosplayers, and get a bite to eat.

After their misadventures Harley and Cowboy head back to the motel where Sparrow is still tied up. Suddenly there is a knock on the door. Cowboy answers it and is shot full in the chest for his trouble. It is Deadshot come to collect Sparrow and his finder’s fee.

I liked the storyline in this issue much more than the last few. The problems with the Gang have been left behind in Coney Island and Harley seems more free to be her reckless self. There are fewer double entendres in this story and Harley isn’t the dreamy oversexed character here as she usually is. In this issue she is more serious and dangerous. And of course, I’m looking forward to her meeting up again with Deadshot, with whom she has a history most notably in a bathroom encounter in Suicide Squad #3. I wonder if this is a teaser for next year’s Suicide Squad movie.

I do have to wonder about the future of the Harley Gang. Are they being left behind for good or will we return to them once this story line is over? I would prefer they slimmed and retooled the Gang to a more manageable number. But I’d rather Harley go solo or perhaps have some adventures with Deadshot rather than have the over-sized Gang. My guess though is that Deadshot will just be around for a few issues before we return to the Gang back east.

I like the art by John Timms, even though I also like Chad Hardin’s who has been doing most of the recent issues. Timms tone is more serious and less cartoony which serves this story about the seedy underbelly of L.A. well. Timms has done good work with Harley before and does here again. The coloring by Alex Sinclair is good as usual. I always like the luminous quality he gives Harley’s pale skin.

I’m going to rate this comic pretty highly, maybe more than it deserves but I’m a fan and that’s just like my opinion man.