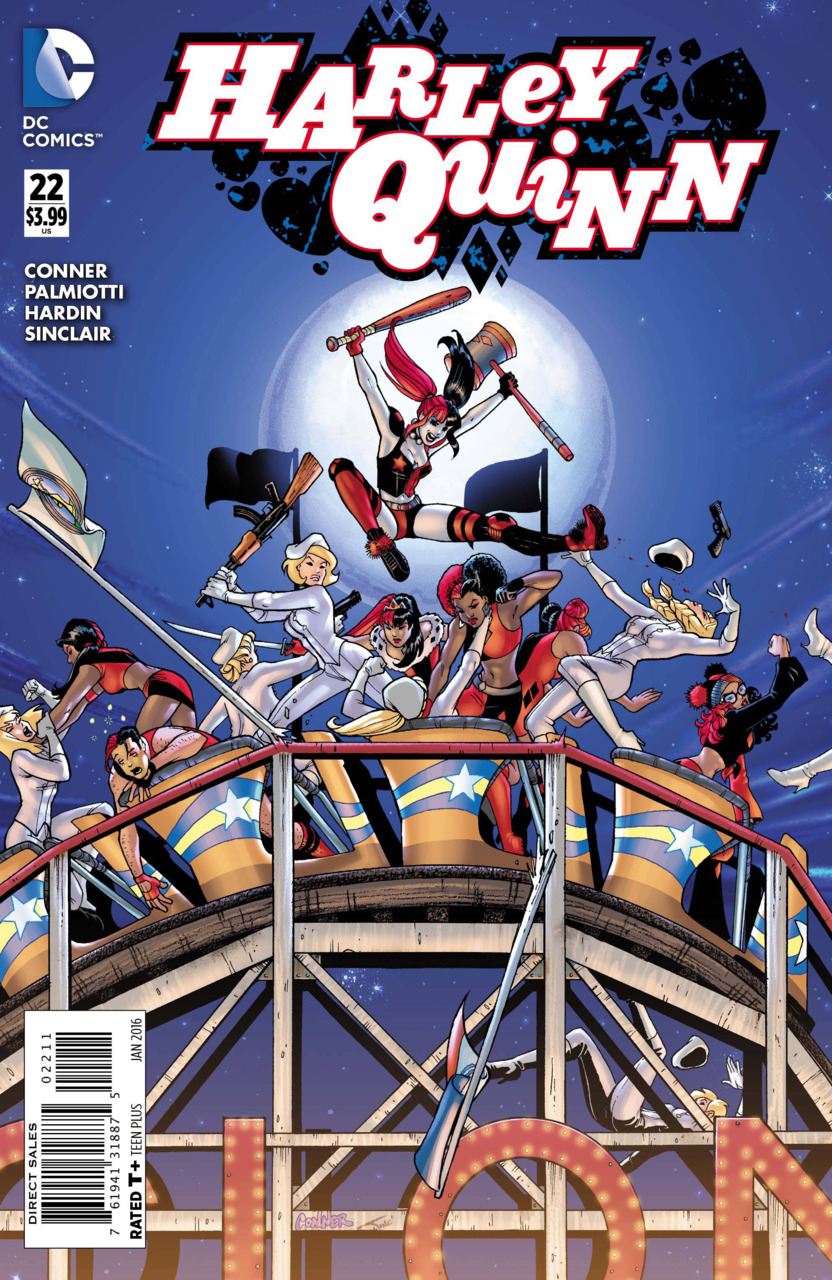 Our girl Harley heads back to Brooklyn but trouble follows her as she tries to save her friends from a crises both old and new in Harley Quinn #22.

Spoil me with your eyes…

Harley is in L.A. shopping Rodeo Drive on Deadshot’s dime, having stolen his bounty money. She heads to the airport to return to Coney Island after her California adventure.

Back in Brooklyn Big Tony gets Goatboy to pick Harley up at the airport.

On the north shore of Long Island a Russian man, Erik, is working on a strange experiment. He has reanimated his dead Grandmother who turns out to be Zena Bendemova who Harley and Sy Borgman deceased on the business end of a rhino horn in Harley Quinn #6. As Zena is revived she declares that Sy Borgman and Harley Quinn must die!

Harley has arrived at JFK Airport having met a new friend on the plane. She turns down the offer of a ride because she is being met at the airport. She finds her driver: a tall blonde man. Sadly, her real ride, Goatboy is tied up in a supply closet. Danger alert!

Harley gets into a gigantic stretch limo with all the extras. She is brought to a deserted warehouse where she is attacked by a team of ladies bearing ordinance. The limo is riddled with bullets and rockets but Harley manages to grab a gun and take one of her attackers out. As the woman falls, she sprays her own people with bullets. Harley then makes a crossbow out of pencils and hits a woman holding a rocket launcher, which discharges and terribly wounds the remaining attackers. As one lays dying, she tells Harley that Zena Bendemova is responsible for the attack.

Meanwhile in an upstate prison, Mason has been having a bad time. He has been getting beat up by the other inmates and the prison officials won’t protect him. Mason is on the phone with his Mother, Madame Macabre, when he is attacked by a group of thugs. Madame Macabre has to hear the fight which Mason eventually loses. As he is taken away one of the guards tells her that Mason is as good as dead.

Harley wakes up wanting pancakes but is distracted by a team of rude road workers. She deals with them by getting her avian friends to fly overhead and release their little birdy bowels.

Big Tony tells Harley about Mason’s predicament. Harley calls Sy at the rest home but he is missing and his room has been destroyed.

Harley gets her remaining Gang together for a planning session. Harlem Harley is holding a stuffed doll in the form of Mr. J. Harley decides to rip the doll’s head off with extreme prejudice. Atta girl, Harley!

They decide to split up. Harvey, Harlem, Harley Queens and Harley herself are going to head upstate to spring Mason. Coach, Sy’s neice Hanna, and the rest stay behind to investigate Sy’s disappearance. Until next month…

This issue is full of Harley in all the zany glory that Conner and Palmioti always bring to her. While I’m glad she is back in Coney Island I am still concerned with the handling of the remaining Harley Gang. Even with a reduced number (with the loss of the Quints), there is still a lot of stage management and dealing with which member is going to deal with which problem.

I am glad that the plot seems to be revolving around Harley saving Mason and Sy. The previous trip to L.A. and the run in with Captain Strong weren’t very high stakes for Harley herself. It should be more interesting for her to try to save her friends than it was when she was just trying to make a buck.

The art by Chad Hardin is simple and clear which lends itself to the storytelling. The colors are well balanced – colorful without having any dominant hues. I don’t think the art is spectacular but gives the writers space to balance Harley anywhere between zany and dangerous.

While I continue to enjoy this book I wonder if it is starting to run out of steam. The situation with the Gang really needs to be sorted out, we can’t have seven gang members and a myriad of supporting characters and still have time for plot and relationship development. I’ve said it before and I’ll say it again: they should take Coach and maybe two other Gang members and create a Looney-Birds of Prey team up.