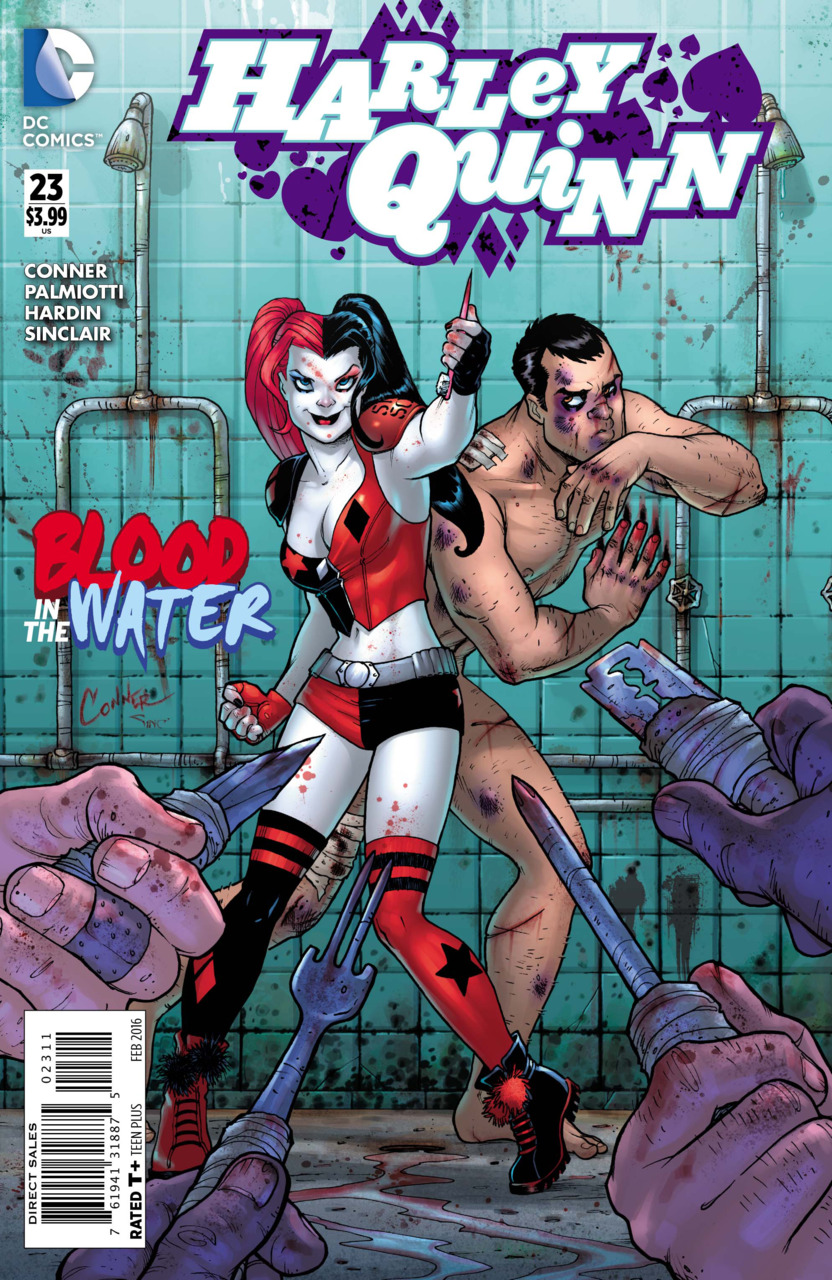 Harley takes on an old enemy with a new attitude and tries to protect Mason Macabre from being assaulted in prison in Harley Quinn #23.

Harley gets a phone call from Zena Bendemova telling her that Zena has Sy Borgman prisoner in a bowling alley in Flatbush. Zena tells Harley to come and get him if she wants him to live. Harley lies and says that she is in New Jersey so it will take her some time to get there.

Harley uses the extra time to get into a cute bowling outfit and takes Hanuquinn with her to get Hanu’s uncle Sy. Needless to say they both go heavily armed. At the bowling alley Harley peeks through a window and sees a horrifying sight. Hanuquinn asks what she saw but Harley is too disturbed to say. Against Harley’s advice Hanu heads into the bowling alley only to come out just as freaked out as Harley.

Zena bursts through the brick wall and punches Harley across the bowling alley. Also, we see Sy pulling his pants up over his bare butt. Apparently Zena and Sy have become an item and Harley and Hanu interrupted their coitus. Even though Zena doesn’t like Harley much Sy says that she can’t hurt her because Harley is his good friend. The four bond over deli food and then send Sy and Zena on their merry way to the Bahamas.

Later, Harley in her Dr. Quinzel ‘disguise’ and Harvey in a suit head upstate to the jail that Mason Macabre is in. Mason had been in the infirmary because of being on the receiving end of a brutal beating. They find that he has been released from the infirmary and is now taking a shower. Harley requests to see him and the guard calls the Mayor to see if this is allowed. Luckily Harley Queens has hacked into the phone lines and, pretending to be from the Mayor’s office, says it is just fine for the visit. The guard flirts with both Harley and Harvey which aggravates Harley so she knocks him out with a whack to the head.

Harvey puts on the guard uniform and keeps watch while Harley heads inside to find Mason. She makes her way to the showers where she finds a bloody Mason being given another beating by a number of inmates. A prison guard looks on impassively. Harley knocks the guard out and takes on the three attackers. They don’t stand a chance against Harley.

Meanwhile Harvey has to mace some curious but dumb prison guards who want to do their rounds. Before Harvey can subdue them, one calls for backup. The team realizes they have to skedaddle before the fuzz shows. However, Mason is too beat up to make the trip. They have to leave him behind as they escape with the help of a rocket launcher.

Harley goes to the prison Warden’s house, ties him up upside down and also binds his wife while Harley Queens and Harvey play video games with the kids. Harley gets the Warden to transfer Mason to a prison out of state. They head back home and find Madame Macabre in tears. It turns out that Mason has indeed been transferred – to Arkham Asylum.

This is a kind of weird issue. The book has been developing these two stories over the past few issues but it is weird to see the Zena Bendemova story end so abruptly. I am wondering if Conner and Palmiotti are somehow going to work the two storylines back together, but I’m not sure how at this point. At this point is just seems like a bunch of filler.

At least all of the Harley Gang problems aren’t in evidence here. In past issues we had been doing a lot of bridgework in giving all the gang members their jobs for the issue which was very tedious. I’m still not sure what advantages the remaining Gang members serve but at least they aren’t a drag on the plot any more.

It was fun seeing Harley beat up all the guys in the shower, and having her being horrified at the sight of Sy and Zena having sex was pretty funny. Hopefully getting Harley back in her old haunt, Arkham Asylum, will perk things up.

The artist Chad Harin and colorist Alex Sinclair continue to do good work. The action and characters are clearly drawn and the color palette is rich with reds and silvers and blacks. Overall, very good visual storytelling.

I have to say I enjoyed Amanda Conner and Alex Sinclair’s cover this month. Harley has a wickedly joyful look on her face as she protects Mason in the shower. It is the visage of gleeful savagery that isn’t matched in the art inside.

I’m going to give this issue an ok rating. I like Harley as always and it was a fun enough read. But there seems to be some zing missing from the recent issues and I think it is starting to catch up with the book.