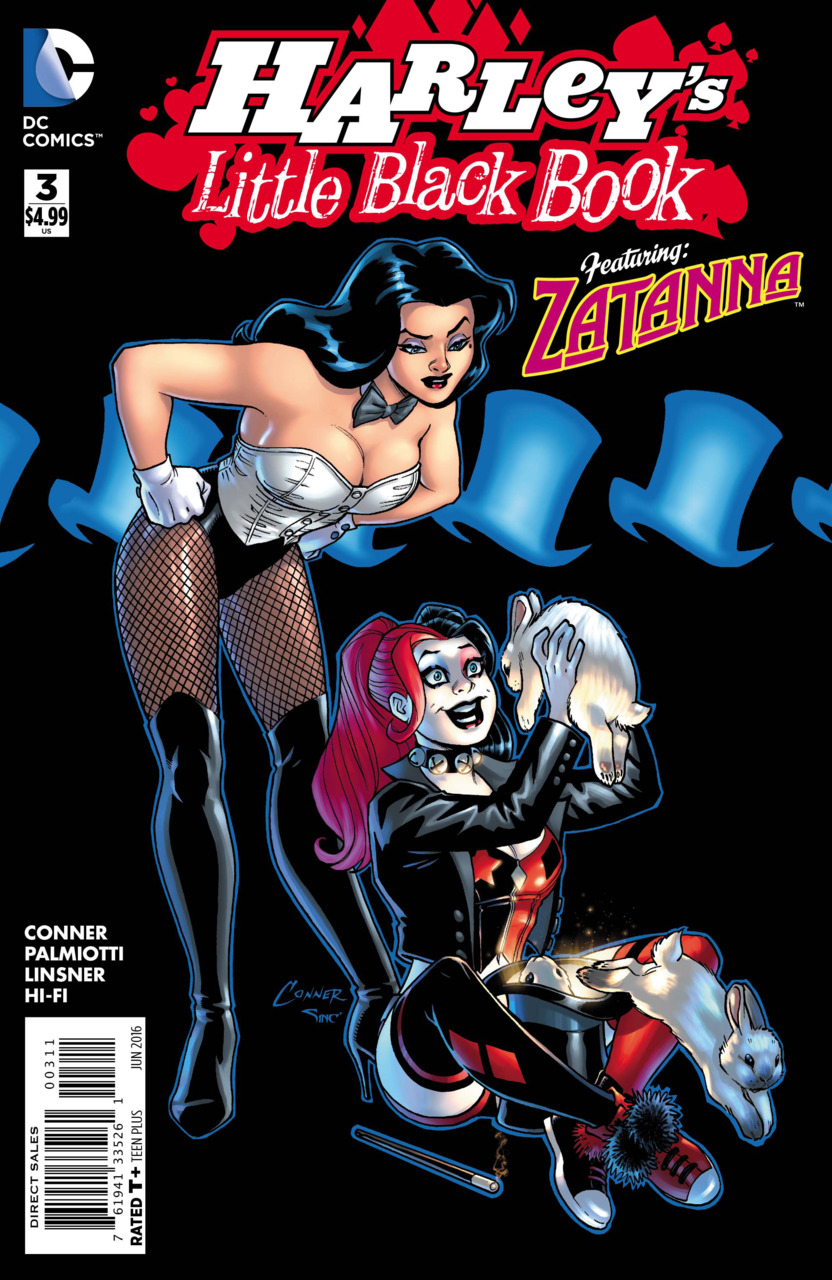 Harley and Zatanna team up to protect a trio of saucy spirits from an evil demon in Harley’s Little Black Book #3.

Spoilers up my sleeve…

Harley is having a sleepover with the visiting London League of Superheroes who aren’t the brightest or most civilized crew even by HQ standards. In the meantime, Big Tony greets his latest hire for a Magic Show who turns out to be Zatanna. She agrees to stay in a room in a floor below Harley’s.

Outside the Hellgate 2 ride in Coney Island, a pair of men discuss their imminent plans to tear down the attraction. A trio of ghosts who live inside the ride overhear them and realize that they have to move out. The ghosts are from a sideshow attraction that was in Coney Island in 1911. One ghost is Bob, the dirty minded and claw handed Lobsterman. Another, Rick, the elegant looking Ringmaster for the three ring circus,. And finally there is the slightly slutty Betty, the star trapeze artist. The three find their way to Harley’s building where they find a sleeping Zatanna and are surprised she is able to see them.

They float upstairs into the room with Harley, her pets and the sleeping London League of Superheroes. Apparently animals can see spirits so the dogs begin barking which wakes up Harley. Harley is also inexplicably able to see the ghosts and shoots at them with a shotgun. This wakes up the League who don’t believe HQ was shooting at spirits. However, Zatanna arrives in full top hat and stockings confirming Harley’s story.

Harley takes a liking to the bizarrely outfitted sorceress and decides to change (in front of Zatanna) into her fighting duds. The pair go to the roof where they find the three ghosts.

The spirits tell their story. Back in 1911 Betty went out on a date with a man named Jolly Straton who ran the Hellgate ride. After dinner Jolly took Betty to the basement of Hellgate where he trapped her. After tying Betty to the floor Jolly attempted to sacrifice her to a demon. Betty screamed before she fainted. Hearing her screams Bob and Rick found the evil ceremony and killed Jolly before he could kill Betty. The demon reanimated (or something) Jolly’s body and condemned the trio to stay on the grounds of the Amusement Park or be destroyed. Shortly thereafter the three died and they were trapped in the park. Harley’s building was originally part of the complex so they could live there without being harmed by the demon.

Back in the present, the building’s roof is attacked by ghostly sea creatures who line up to kill the three spirits. Zatanna decides that she and Harley need to do something about this menace. The idea of performing an exorcism the hard way appeals to Harley who dons a blue and red Ghostbusters outfit and gear along with her trademark oversized mallet. Zatanna works her magic to make them both spirits. As a ghost Harley gets to smash the sea spirits which pleases her to no end.

The ladies find their way to a sunken Nazi WW2 submarine. They find Demon-Jolly but he is just as interested in breaking the spell as they are. Zatanna tells Demon-Jolly that if he releases the three ghosts from his curse she and Harley will find a way to get the original demon that Jolly summoned to release him from the submarine. Jolly tells Zatanna the name of the demon – Nad OiDid – and Zatanna casts her backwards-word spell (backwards name is Dan DiDio) to bring them to the big baddie.

The next night Zatanna is on stage performing her magic act. She has a trick with a large safe which Harley comes bounding out of. Nad’s voice can be heard kicking her out of his realm and saying that he will give them the treasures of the universe if Harley never steps foot in his domain again. The End.

Amanda Conner and Jimmy Palmiotti deliver another fine installment of Harley’s Little Black Book. This issue has all of the sexy stunts and kooky antics Harley fans will expect. The trio of ghosts are pretty well drawn characters, though Harley and Zatanna are clearly the stars here. Zatanna and Harley have a fun relationship. Zatanna alternates between being annoyed by Harley’s antics, respectful of her results and flirty when she can’t help herself. Harley gleefully engages in the magic world of Zatanna and seems to be enjoying herself thoroughly. The twist where Harley gets kicked out of Nad’s domain is right out of The Ransom of Red Chief, which makes perfect sense here. The one drawback to the story is the London League of Superheroes. They aren’t really germane to the story and seem to be filler. There is a subplot where one of the League goes in search of his long lost daughter, it went nowhere and was unnecessary.

The art by Joseph Michael Linsner and colors by Hi-Fi is the high quality work that Harley fans have come to expect and possibly take for granted. There must be something in the water over in Conner and Palmiotti land because with all of the Harley titles that are out there we don’t see the art issues other books have.

As anyone that has read my reviews knows, I’m a Harley fan and as such really enjoyed this issue. I’ve never been a big fan of Zatanna, probably due to her nonsensical outfit, but I really enjoyed her character here. The Little Black Book series shows Harley interacting with other members of the DC universe and they are taking a warm, lighthearted approach to it. I was initially afraid that the other superheroes would shun Harley because of her annoying personality, but in each issue they warm up to her which makes it a very satisfying read.