Review: Harley Quinn and Her Gang of Harleys #6 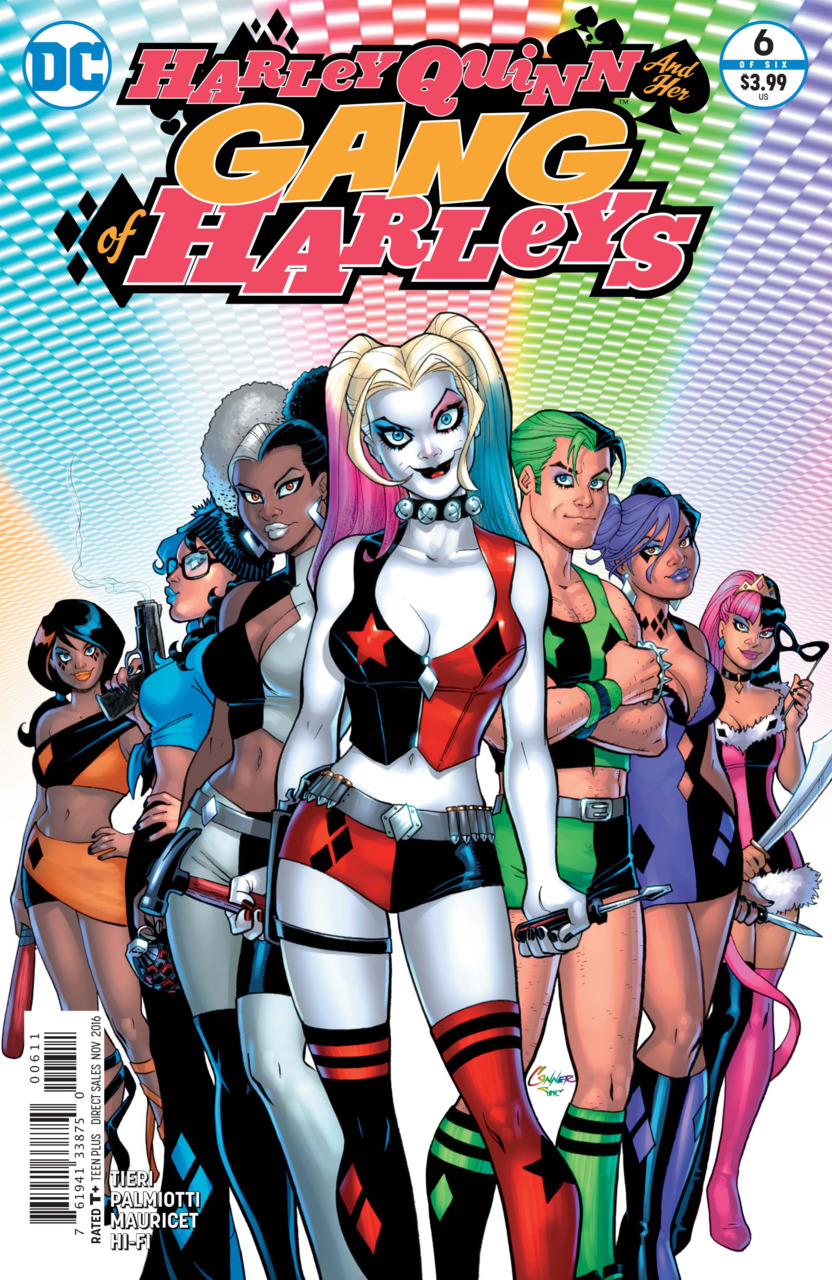 Harley and the Gang, reunited on Harley Sinn’s island of peril back in issue #5, make their way to find Sinn for a final showdown. Harley, being at heart a Psychiatrist, considers whether to kill Sinn or rehabilitate her. Her Gang recommends homicide. As they make their way through the island they come face to face with Sinn’s army of villainous cutthroats. The two gangs fight but Harley’s crew are outnumbered and out gunned. The Gang splits up and agrees to take the weapons off those they are able to kill to even the score.

Watching the fracas from his ship, Captain Strong gets his sharpshooter rifle and with Goat Boy’s assistance begins to take out the bad guys that endanger our heroes. With Strong’s help they defeat Sinn’s murderous crew and Harley makes her way to the main building.

With cameras all over the island, Sinn watches Harley’s approach and prepares for battle. Harley finds Sinn in her command center and gives her some options: they fight hand to hand and if Sinn wins the fight she can join the Gang. But if Harley wins, Sinn will get the psychological help she needs. The pair drops all their weapons and begins to brawl. Both ladies get in good hits but as Harley overcomes Sinn the villain pulls out a hidden knife and attacks Harley. Harley disarms the cheating Sinn and chokes her until she passes out.

The Gang arrives from cleaning up the army of evil to find Harley caring for the unconscious Sinn. They all head back to the ship with Harley Sinn tied up and go back to civilization.

At the hospital, Harley Sinn is strapped to a bed with her Father at her side. Harley Q has made a deal to have her sent upstate to get some much needed help.

Back in Brooklyn, the Gang visits Hanuquinn who has been hospitalized due to the injuries she sustained while protecting her uncle Sy Borgman several issues ago. The gang causes a ruckus at the hospital, but is all good now that they are reunited.

A week later the ambulance carrying Harley Sinn is stopped by a number of black cars blocking the road. Sinn’s father gives the ambulance driver a suitcase of money and declares there has been a change of plans. Harley Sinn wakes up strapped to a hospital bed in what appears to be a prison cell. She calls out for help and a strange voice replies. The voice says that Harley Quinn is to blame for her being in prison even though she promised her she would get help. She has been betrayed by Harley and is now has been left to rot in a cell. The voice turns out to be Joker, and Harley Sinn is in Arkham Asylum. Future devilry is promised. THE END

This final issue of the miniseries is a satisfying wrap up to the story. Harley’s gang is finally gelling and some of their individual personalities are beginning to come through. Harlem Harley, Harvey Quinn and Bolly Quinn are particularly identifiable now, whereas at the beginning of the mini they were all sorely underdeveloped. Of course the wheelchair bound Coach is physically recognizable as well.

From a purely story standpoint writers Frank Tieri and Jimmy Palmiotti have given us a solid mystery and action plot, with an interesting villain and well-paced progress through the tale. Between the Gang itself and the other Coney Island team such as Big Tony and Captain Strong, Harley Quinn is really finding her own Harley-family.

The pencils and inks in this issue are by Mauricet and the colors are by Hi-Fi. There are some pretty stunning panels such as the opening scene with Harley and the Gang looking menacing and bad-ass. For some reason Harley’s skin wasn’t the normal silvery-ivory but had an odd blue tinge. This could be because I read the comic digitally rather than paper like I usually do.

This issue is $3.99 which is a buck more expensive than the regular Rebirth comics.

The more this mini went on, the more I enjoyed it. I have criticized this and the regular Harley book for not developing the side characters, but that is no longer such a big problem.  Big Tony in particular is developing into one of my favorite characters in comics, not only in this mini but the other Harley titles. The one thing that was somewhat of a letdown was the fact that Joker is involved at the end. I am not a Harley and Joker fan so I am not looking forward to future Joker/Sinn team ups. But I understand that (other) people do like him.