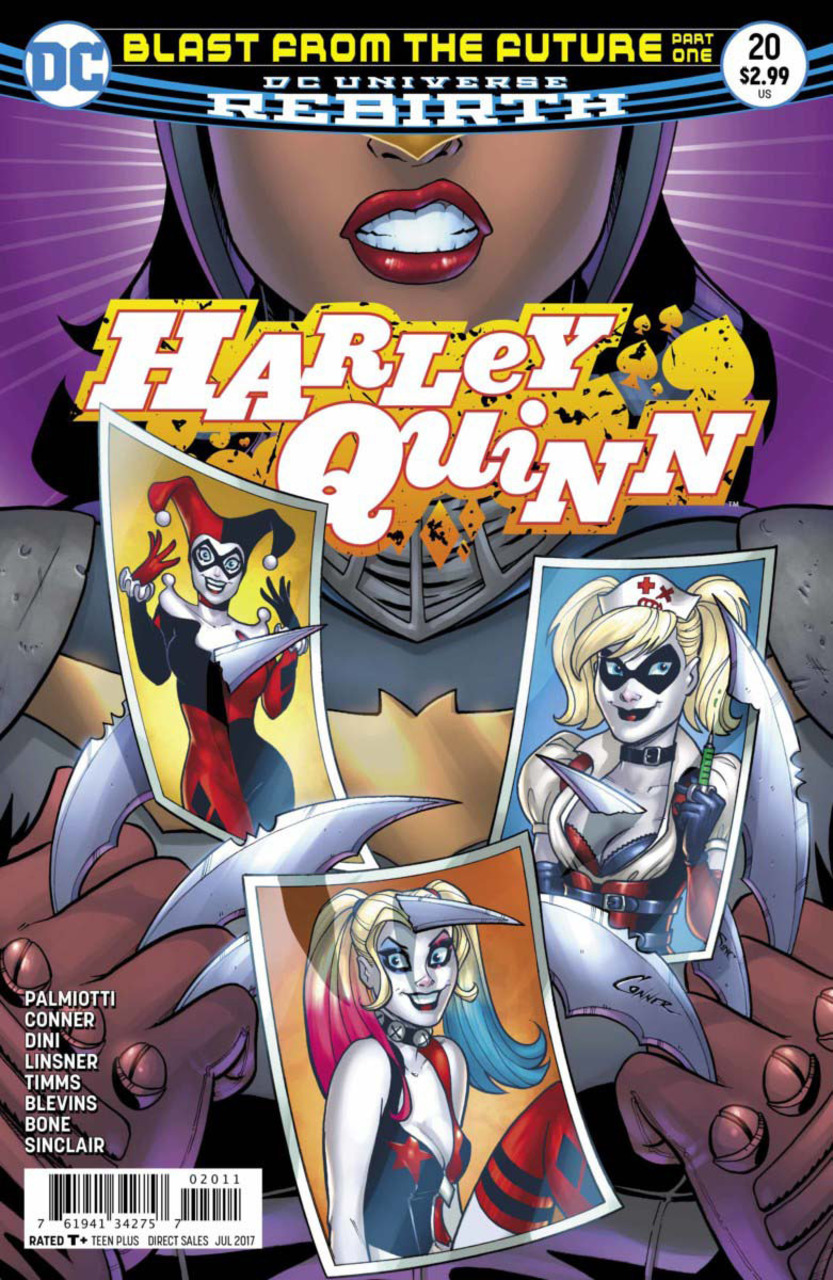 (Spoilers ahead) “Rulers are for suckers…and the people that need ‘em.” Harley Quinn #20 opens with an emotional Harley at the cemetery, at the mass grave for all the homeless people killed by the cannibals in preceding issues. Whilst her Chief of Police cop friend tries to lend some perspective, Harley isn’t buying it. Woe betide those responsible if Harley hasn’t killed them already! (She’s killed most of them.) A bit of banter ensues back and forth between the Chief and Harley, with Harley imagining either him or herself ascending to become Mayor, and Chief Spoonsdale paints a lovely vision of Ivy, Harley’s friend, renovating Central Park.

Cutting to Harley’s apartment, Redtool is getting treated and enjoying Harley being his nurse, as she stresses about her parent’s impending visit. And just then…Harley Sinn is on the line! And she has Mason and Madame Macabre captured! Whatever will Harley do, Bat-Fans?? Well Harley isn’t shy about calling in a favor, so she calls Chief Spoonsdale immediately, ready to cash a big fat one in!

Cut to Gotham City, the Batcave, and our time traveler from the future has arrived, Devani, fresh with her mission to kill Batman’s No 1 Enemy, Harley Quinn! The art sings in these pages which are perfectly suited to the design of the cave and this interloper. Meanwhile, Tony lays the hard word down on Harley as she imagines her parents coming to stay in her apartment. Can you remember one day without madness in this pace, he asks? Harley valiant tries too…a year ago, or was it two years!

Well, that day isn’t TODAY as Devani, fresh from acquiring information on Harley off the Batcomputer, smashes in the front door and declares death on Harley for the murder of Batman! Once again the art lights up as it shows the fight between the two. Beautifully colored backdrops set up the detailed and solid art depicting both Harley and Devani in the fight. There’s a solidness to the character designs which is highly pleasing to the eye. In the wrap-up, Harley wins the fight with a righteous knockout and is just grumpy that this “Bat twit” undid all the cleaning she was doing for her parent’s arrival! Unfortunately for Devani, Harley has a lot on her mind today, and flings Devani toward the river via the catapult upon her roof! Tune in next episode!

The second story in the issue takes to the excellent Paul Dini written backup (along with Jimmy Palmiotti) which features a story from Harley’s and Joker’s earlier days, when they were still a young couple! Picking up from last issue, Joker and Harley never made it to the hotel, courtesy of Joker blowing up a gas station, located right next to a doughnut shop, filled with cops! They escape to a rundown hideaway motel, where Joker does a fake reveal of his name and Harley and her hyena “pets” roll through to the massage bed. Loaded up on MSG and overwhelmed by the moment, Joker even confesses his feelings to Harley as she falls asleep.

This backup story has underpinned the old Joker-Harley partnership as it was back in the early days, infused with a slightly more adult touch. Considering the monster he truly is, Joker in this story is still a dangerous clown, but the edges are softened by an extremely young and gorgeous Harley depiction. The writers are careful to still show the savage edge to the Joker character, but the cartoony escapade mask it to serve the story, much as many good episodes of Batman: The Animated Series did back in the day. There will always be those who object to the Harley origin and her relationship with the Joker, but in the hands of Dini and Palmiotti we have writers who know what they are doing and can deal with subtle edges and undertones of a vast darkness, played light in the cartoon glow.

Another great issue of Harley Quinn. Is this the best Rebirth title? It’s up there with Greg Rucka’s Wonder Woman or Detective Comics, swinging for a completely different set of fences.