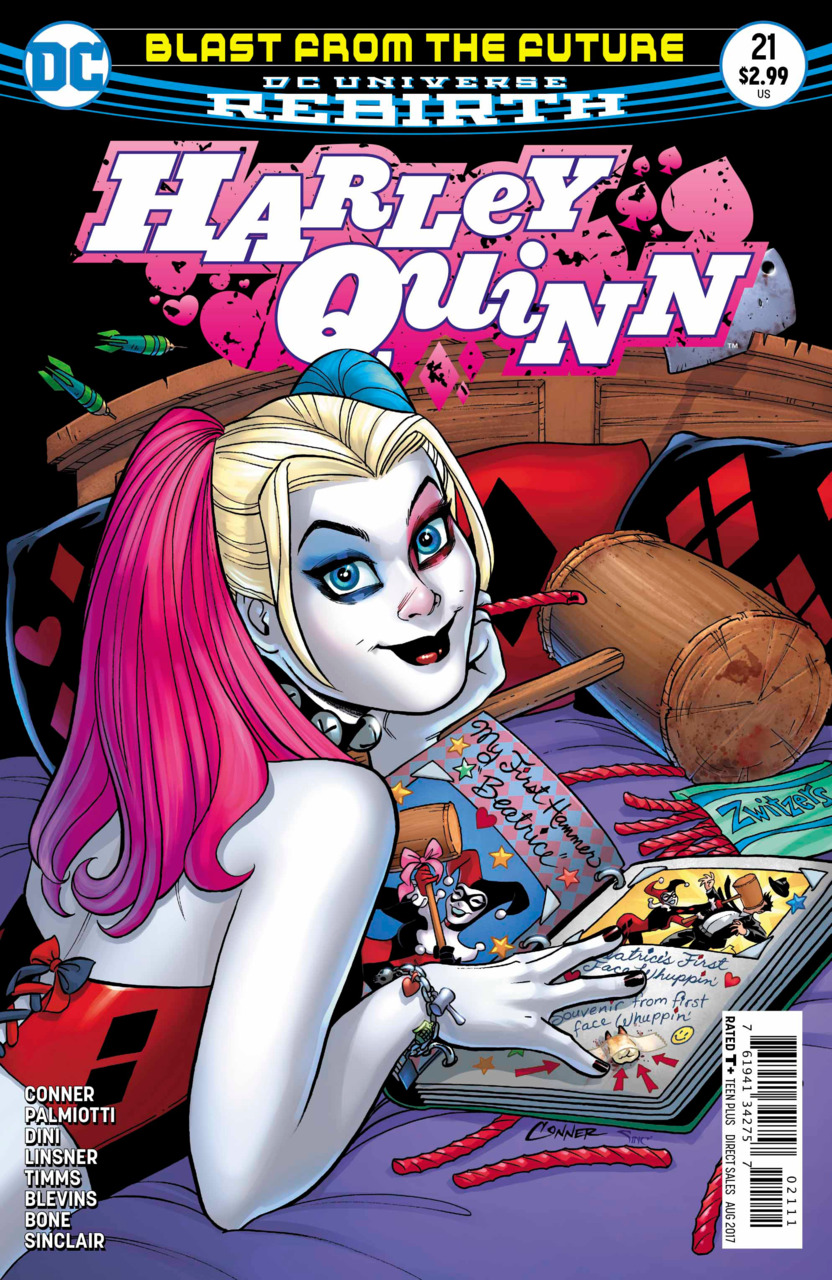 (Spoilers ahead) Harley Quinn #21 opens with Harley Sinn depositing her captives, Madam Macabre and her son, in a rustic motel cabin, are upon covering with her prisoners, she learns the Mayor set her up and is responsible for depositing her ass in Arkham!

The art in this issue positively sings from the first appearance of Harley, atop her apartment building, launching her scatapult toward Broadway, containing the Future Bat Lady aka Devani Kage from the future! But Harley is disconcerted to see that this Bat Lady doesn’t go down easy, and has thrown her version of grappling hooks which bring her back face to face with Harley on the balcony! The two exchange a vicious series of blows, with Devani having an electro-punch and Harley a big ol’ wrench! Eventually the two ladies fight themselves to a draw and knock each other out cold.

Harley and Devani wake up, tied to chairs, with a strange voice questioning them who informs Devani she comes from an alternate future – or this is an alternate past, with different facts, including the fact that in this past Harley Quinn hasn’t killed Batman! Harley of course amusingly notes that perhaps Batman will piss her off enough one day that she might do the deed!

Meanwhile, the tension ratchets up as it’s revealed Devani’s great-great-great etc. grand-parent is in the other room and the mysterious voice coming across the air is saying that he will gas and kill the forefather and prove to Devani that she DOES come from an alternate future and she won’t disappear just because her forefather dies in front of her!

I almost don’t want to spoil the reveal for who the mysterious voice belongs to as it’s a sweet, crafty bit of storytelling that pays off a long running thread in the Harley Quinn book. I will leave that twist to the reader to find out as it’s satisfying and fun.

Cut back to Harley waking up in her bed, to discover her apartment all spotless and clean! The doorbell rings and…it’s her parents!!!

In the second story written by Paul Dini and Jimmy Palmiotti, Harley is in her classic suit and comes back to save Joker from an attempted shakedown, after she has ran a ton of errands for him. Joker and the gang are hiding out in a crummy motel room, with not even a real hideout to hideout in! Even though it’s all a joke, we of course see that Joker, even when he is trying to be nice to Harley, still can’t really do anything but take advantage of her – as Harley herself says as she goes on another errand run for Mistah J, “Its days like these I question my life choices!” In an extremely amusing twist, it’s revealed that a couple of would be hipster coffee-bar owners have bought a huge building jam packed with all the carnival/party goodness that Harley and Joker crave! When Harley learns their asking price for the building is a cool 10 MILLION, she responds in classic Harley style – by smashing them over the head with a baseball bat!

I love these backup issues to the main title – it reconfigures the Harley we get in the main book but the tone isn’t completely divorced from it either. They are little sidepieces with a slightly more adult tone than the Animated Series Harley, but still very much of that flavor. Its clever writing and gorgeous art.

Harley Quinn #21 is a very solid issue and a nice building of the mythos with Devani, who shows potential to be a nice recurring character for DC, and a good foil for Harley. Something Conner and Palmiotti have excelled at in their run is to build the supporting cast of Harley Quinn – much like on a good sitcom, which the Harley Quinn title definitely shares some affinity with, the basis for the continued strength of the comic week to week (or fortnight to fortnight) is the depth and amusing nature of the supporting cast around the star character i.e. Harley.