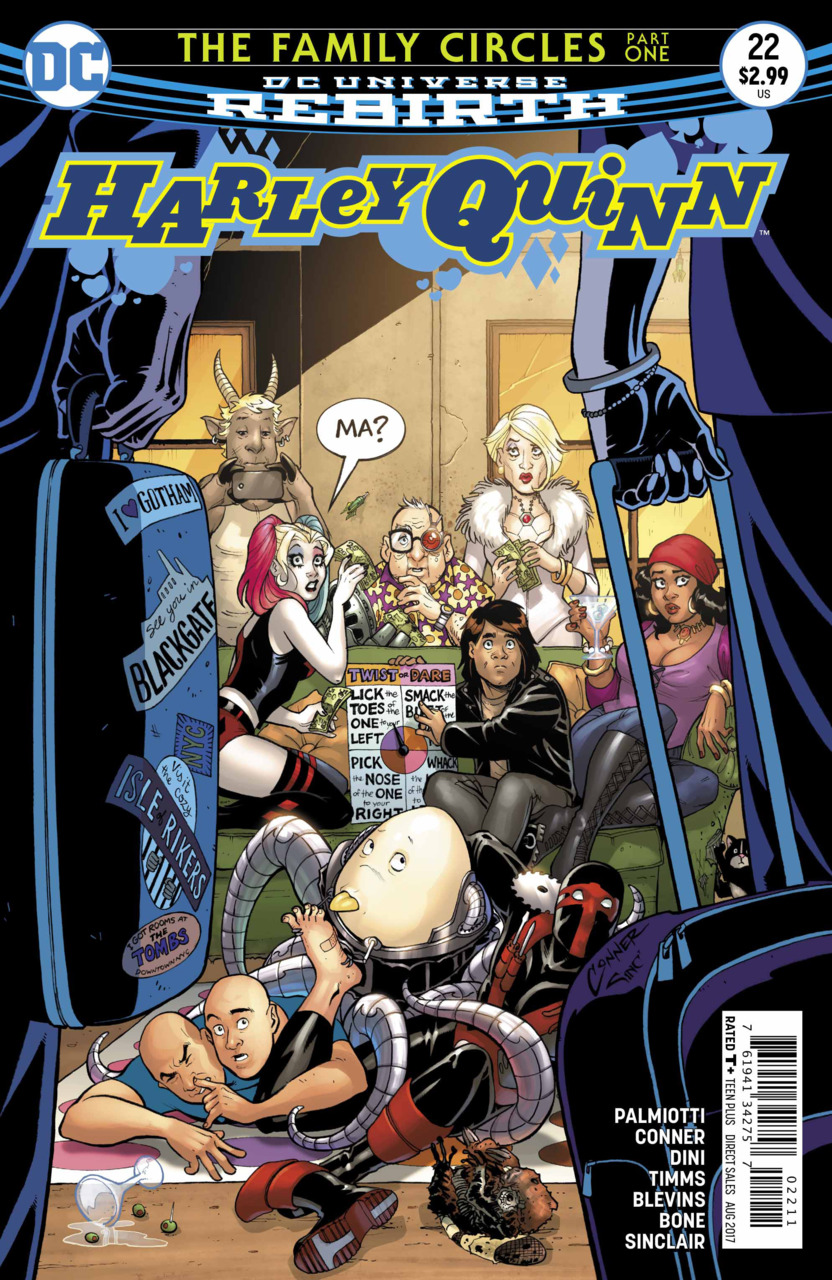 (Spoilers ahead) The fab new issue of Harley Quinn opens to Harley being embarrassed by all her friends as her parents enter her apartment, only to then wake and discover, she’s dreaming, in the backseat of her parent’s car! They catch up on some family history and the status of Harley’s little brothers, on the way to Harley’s workplace. Meanwhile, Jean Raymond, an attorney for the Mayor’s office, has turned up at the jailhouse and announces to the police chief that she has released Madison Berkowitz, implicated and caught by Harley in the recent cannibal case, along with releasing all those crazy cannibals. Something is definitely afoot! Jean Raymond gets right in the police chief’s grill, semi-flirtatious, but our favorite police chief doesn’t buckle, parting with a few choice words at Ms. Raymond.

Cutting back to Harley’s work, she gets the highly relieving news that her parents aren’t planning to crash at her pad, but instead staying in a hotel and they go on their way. After a quick bath she comes out – only to find the infamous Harley Sinn has gagged and tied up her sometime boyfriend and his mother! They fight in a dynamic and fun scene which is a nice utilization of Harley’s color scheme – but in the end, there’s an epic cliffhanger – Harley Sinn wants to take down the Mayor!

This is a fun if slight issue of Harley Quinn which builds up the semi fake reveal of her parents coming into the apartment very well, and showcases her close relationship with her parents – just like Harley, they are offbeat but sweet. The art as always is consistent and displays the action well – it’s the same consistent storytelling Amanda Conner and Jimmy Palmiotti have been doing for several years and the fun doesn’t stop. I was saying to my friend recently just how solid their reign on Harley Quinn has been – we oftentimes praise only the long term storytelling of books we consider “serious”, but Harley Quinn, much like Gerry Duggan’s Deadpool at Marvel, is very adept at alternating between layers of humor and almost slapstick style fighting with scenes of greater emotional payoff. Conner and Palmiotti deserve a large share of the credit as they are obviously guiding this title both in the New 52 and now well into Rebirth.

Turning to the backup bonus story, Paul Dini and Jimmy Palmiotti continue the story of Harley and the Joker back in their earlier days, when they were still together and Harley wore her old classic costume. She’s having tea with a couple of old friends, Jenna and Harriett, a couple of delightful scamps like herself who belong to the Wonderland Gang. They are running a hotel but taking five seconds to be with Harley. It’s cool to see a couple of C list villains in a minor league gang be given some screen time and fleshed out in just a couple of pages – Dini makes it work. The art is a great blend of that old-time Batman: The Animated Series feel with something a little more adult, a touch darker or more violent around the edges. And as Harley enjoys her high tea…a strange new burglar has entered Gotham! Captured on Wayne Corp video as she looted the place, Grisom, a Brazilian weasel themed thief is embarking on a criminal rampage across Gotham!

Cutting back to Harley who is sporting a Carmen Sandiego look as she goes with a fedora and trench coat over her classic uniform, she has been on the police radio and turns out that Grisom has been hitting all the Joker’s targets before he and Harley can get there first. This obviously causes some consternation for Mistah J who is going to set up this weasel for a fall.

But Harley ain’t finished yet! Jenna Duffy has a renovation service on the side and she’s already swinging a crowbar gutting the Joker’s old hideout in a joke-shop, tearing out old fixtures. I loved the last page of this comic, light and fun, as Harley and Jenna negotiate on price. There’s something essential childlike and fun-loving about classic Harley, combined with her street-wise, snappy attitude. It still remains to be seen, as Harley and Jenna high five over Harley’s design plans, what the Joker will think of this gutting and remodeling of the joke store.

Another good, solid issue of Harley Quinn – after all the buildup the introduction of Harley’s parents got off to a slow-burner but satisfying start. The storyline went fast and was slight but amusing. Doubtless the stakes will heighten as we walk deeper into the story. The Dini/Palmiotti collaboration in the back took the glow in this issue – always strong, the side story really sing this issue. Run don’t walk and grab your Harley Quinn fix from your local comic book shop!