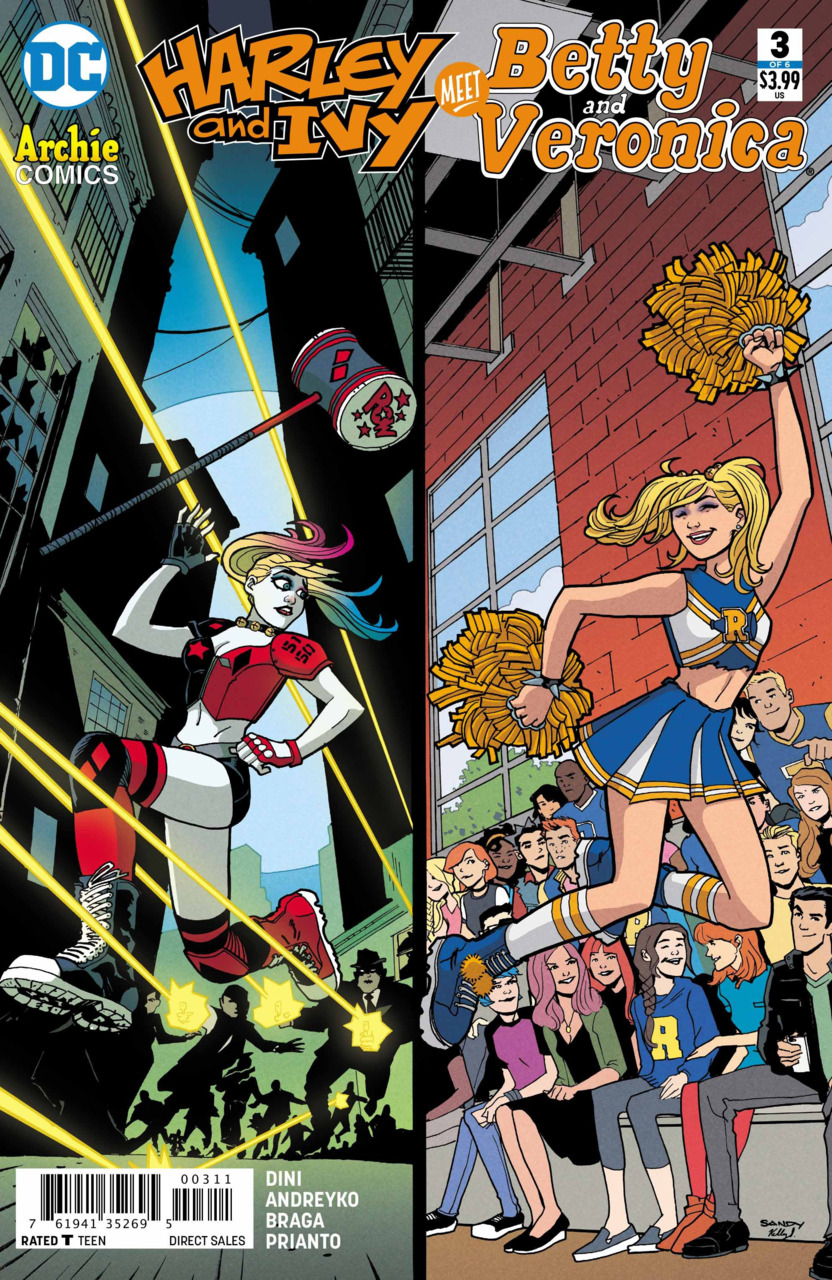 Synopsis (spoilers ahead): Harley and Ivy wake up at the Lodge estate in Betty and Veronica’s bodies thanks to a Freaky-Friday style body switcharoo by Zatanna. Now that they are teens they have to go to high school, Veronica-Ivy decides that it is a good idea to play along for a few days so she can make progress in getting Hiram Lodge to back off from destroying the Sweetwater Swamp for his phony college.

The two head to high school where they do their best to play the part of B&V. Ivy aces a botany test for Veronica. Harley performs a flawless gymnastic routine with Betty’s limber physique. They can’t hide their obvious changes from their friends however, who suspect something is going on.

Betty and Veronica are woken up by Catwoman who believe them to be her two fellow Sirens. Veronica discovers she has power over plants. They decide that they need to buy a car to get back to Riverdale. Luckily there are garbage bags of money all around Ivy’s pad. A team of armed soldiers try to stop who they believe to be Harley Quinn and Poison Ivy, but Veronica uses her new plant powers to tie them up in vines. They buy a car with the cash but it turns out that the money is really “Funny Money”. The dealer takes it anyway and calls Mr. Lamprey to tell her that H&I are back in town as the girls spin off.

Joker makes his way to Gotham to reconnect with Harley.

Peach-head Henry, one of Lamprey’s men, drives his car into Betty and Veronica’s car and puts them to gunpoint. Before he can shoot Joker smashes his soft fleshy noggin with Harley’s giant hammer, killing him. Joker presents himself to the confused high school girls who wonder if it is just Reggie in a Joker costume.

Analysis: The problems that plagued the last two issues are thankfully missing from this issue. Writers Paul Dini and Marc Andreyko have gotten their story fully underway and it does move well. This is a standard ‘fish out of water’ tale with Harley and Ivy navigating a modern high school, and Betty and Veronica dealing with the darker side of humanity.

Having Joker in the story adds an element of danger to Betty and Veronica’s adventure in Gotham. Hopefully Betty will be up to the task of defending herself from the Clown Prince of Crime.

The book is drawn by Laura Braga and Adriana Melo. Colors are by Arif Prianto and letters are by Deron Bennett. There are some excellent full page panels. One shows Harley and Ivy in their teen bodies shocked at having to go to school while images of their true personalities show surprise behind them. The colors are a pretty mauve that is nicely set off by ‘Veronica’s’ black hair. The final page is also an eye catching panel showing Joker with Harley’s hammer behind his head and a stunned Betty and Veronica (in the bodies of Harley and Ivy) looking up at him in the foreground. Joker has what seems to be yellow and green beams of light coming from behind his as the remnants of Peach-Head’s peach head dripping from the hammer.

Some of the other art is more of a mixed bag. Sometimes character faces are drawn full of expression, other times faces and body stances look blank and uninterested. The art does help with the story telling overall and the successes greatly outnumber the flubs.

Final Thoughts: The Harley and Ivy body swap with Betty and Veronica is just what this title needed to kick it into high gear. I have previously been pretty hard on this book with regard to my rating. I’m going to turn it up this time around. The story is well underway and the problems seem to have been ironed out for now.