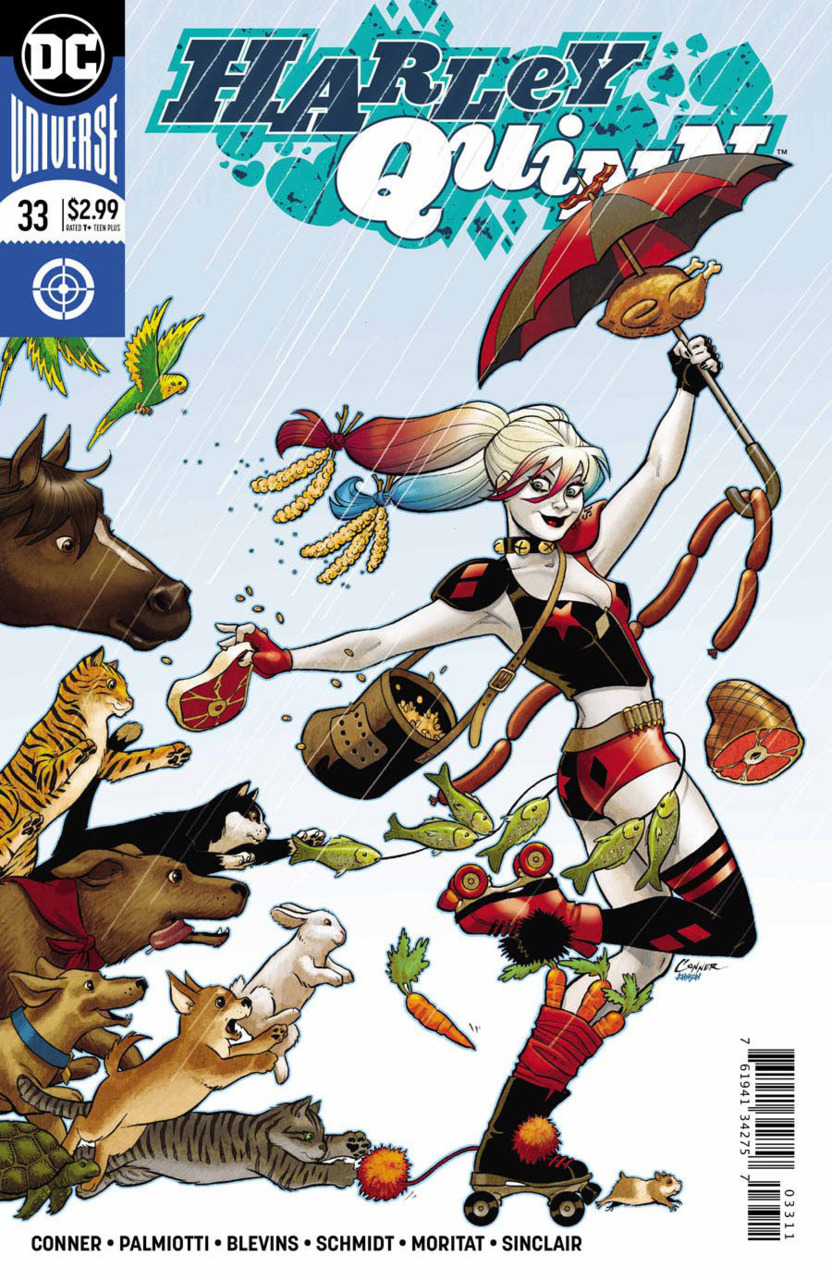 Overview: In the wake of Mason’s death Harley attempts to deal with his loss, in the midst of a time of change for her and her friends.

Synopsis (spoilers ahead): The issue opens at Mason’s graveside with a hurricane on approach. Mason’s mother, Madam Macabre, is having perhaps the toughest time of all. After the service, Eggy is volunteered to drive Harley and Madam Macabre back to the apartment.  Poison Ivy offers for Harley to stay with her in this time of grief, but Harley is devoted to trying to help Mason’s mother. Ivy stays behind to visit the grave of an old friend, as Harley and Madam Macabre leave with Eggy.

Once back, Harley gathers all her animals to sleep with her to avoid the oncoming hurricane, as Mason’s mother bids her goodbye. Soon Harley gets restless and joins her roller-derby pals, who warn her of a new player in town, Victoria Fit, who dazzles and distracts and wins! Harley, full of confidence, challenges her, only to also fall under her mind-control! But Harley doesn’t go down easy! After being seduced by her “twinkly ta-tas”, Harley wears a blind-fold and quickly annihilates her rival in a fantastic fight scene!

At the diner after the battle with her pals, Harley talks her way through the stages of a grief, all the while eating a LOT of food. She gives her winnings away to decrepit hobo, along with the leftovers of her food, and on return to the apartment she learns Tony is about to hit the road on a road trip! Harley invites herself along, and they quickly pick up a comrade, good ‘ol Poison Ivy! The wacky crew are on the way and on the run from the hurricane.

Analysis: There’s a slice of almost delirious comedy beneath the sad beats of this issue. Harley is on the run from her feelings and the events of Mason’s death. The hurricane is an obvious metaphor but an effective one – everything will be swept away to be born or maybe die anew. The scene with her animals comes straight out of a sad beat, but there’s a delight in Harley, an almost psychedelic spin on the splash that shows a squealing Harley with her animals eating all the treats she has brought them. She wakes the next morning to the same old dreary world, everything grey with the rain and her sorrow. Rain is everywhere in this issue, it pervades the pages. Everything is a dance between Harley’s manic personality and her grief.

It is a fine balancing act that Conner and Palmiotti do in this issue. Harley is clearly affected by Mason’s death, as are her friends, but then there’s also her undeniably manic personify which short circuits and jumps from one emotion to the next. She runs to the roller derby for action, violence and companionship. She cavorts with her animals, seeking safety and warmth. She takes to the road with Tony and Ivy, escaping the grey skies of the hurricane which surely will tear down everything she left behind. In a book which also relies on gags and outrageously over the top antics to keep it’s own energy up, there is always a bit of heart in every issue of Harley Quinn and this one delivers.

Final Thoughts: A somber issue cushioned by Harley’s irrepressible attempt to cope with loss and change. A tender and moving issue. This is one to be enjoyed after reading the whole arc with Mason. Recommended.