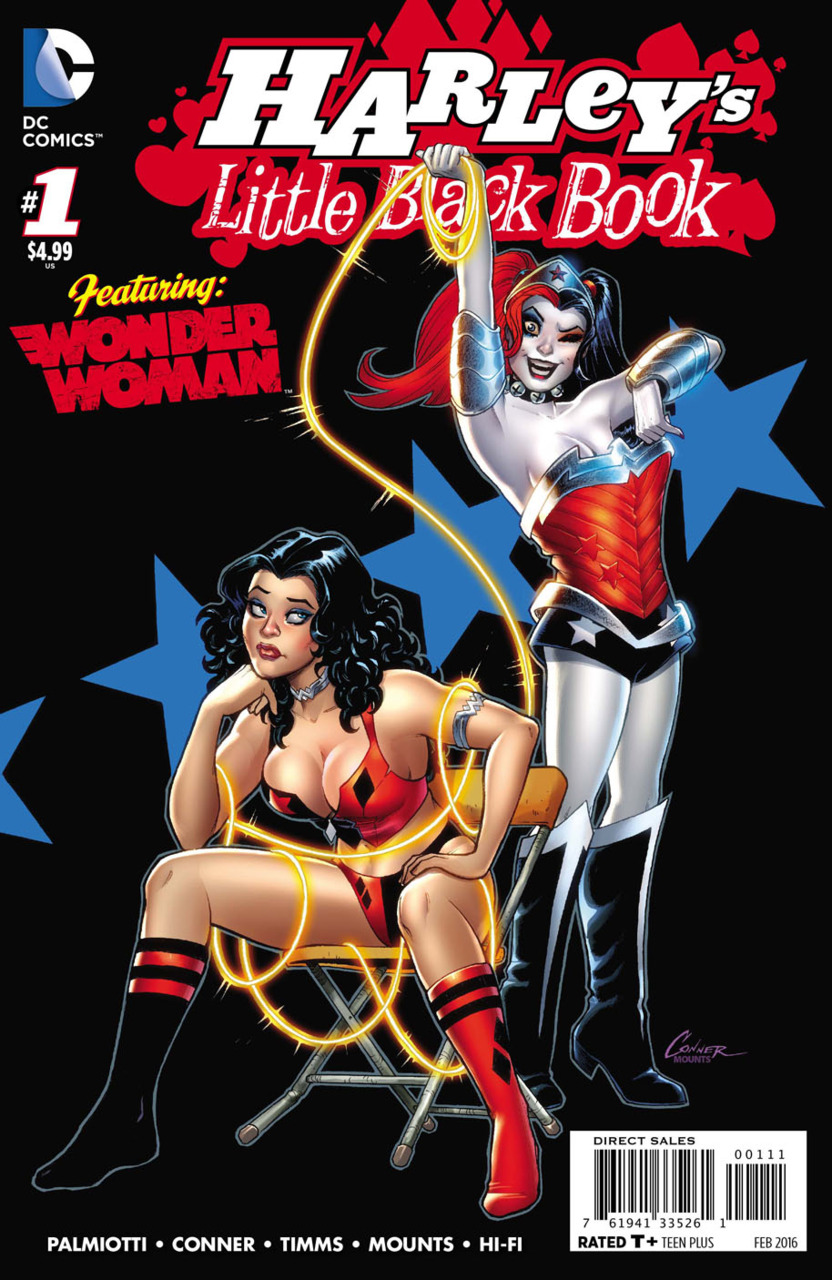 Harley takes a trip to London to save Wonder Woman from a batch of British nasties but not without a heapin’ helpin’ of hijinx in Harley’s Little Black Book #1.

London Bridge is spoiling down….

Harley is with her gang in Sheepshead Bay, Brooklyn busting a group of cooks illegally dumping chemicals. She forces one of the gang to fess up to the gang’s plan: to deliver a mix of chemicals to a group of baddies headed by one Barmy Bugger in London, where Wonder Woman is living. The evildoers want to use the contraband to create a knockout gas so they can capture WW and hold her for ransom.

Harley becomes very excited because it seems that she is Wonder Woman’s biggest fan. She has a whole closet dedicated to the Amazonian princess. Apparently when Harley was little she used WW as an inspiration to (viciously) defeat some kids that were forcing her to do their homework. Even getting called into the Principal’s office didn’t dissuade her from adoring her chosen idol.

With WW in danger Harley concocts a plan. She will travel in a cargo box with the chemicals for the 12 day journey by sea. In London she will save Wonder Woman and maybe get to be her side kick for a while. That’s the plan anyway.

Meanwhile in London a low rent London Legion of Superheroes has heard that there is a plot against Wonder Woman. They head over to the waterfront to intercept the ship. When they arrive at dock and open the container door they come face to face with our Clown Princess of Mayhem. Harley first tries to play like she is in with the plan to gas Wonder Woman but once she realizes the group is a bunch of good guys she comes clean. However, now they don’t believe her especially since one realizes she was Joker’s girlfriend.

Before Harley can be taken into their custody a missile lands on the dock. The team is knocked out by a gas that comes from the device, but Harley scampers away and wangles into one of the chemical boxes. Barmy Bugger’s guys take the cargo away and also grab the Legion for good measure.

Hiding in the box, Harley waits until the head chemist mixes up a batch of the knockout gas and leaves the bad guy’s lair. Harley grabs one of the gas canisters and heads over to Wonder Woman’s apartment.

Wonder Woman is house sitting for a friend when the doorbell rings with flowers. And knockout gas. And Harley Quinn in a gas mask.

WW gets knocked out by the gas and Harley drags her hero into the bathtub, strips her and puts on her costume. She has to add some structural elements to the costume to keep the bust area in place, but is otherwise pleased with the result.

Barmy’s goons hit the apartment with gas and bullets. Luckily Harley has her gas mask and also discovers a discarded rocket launcher which she uses to good effect. The remaining thugs pin Harley down in a barrage of gunfire. Suddenly Wonder Woman, dressed in Harley’s discarded outfit, bursts through both the door and Harley’s blouse.

Harley throws WW her bracelets and the two fight and defeat the bad guys. Harley is on the verge of tears at this dream come true.

A final bullet from Barmy Bugger’s sidekick’s rifle is caught in midair by Wonder Woman. She flies over to the rooftop where the shot came from and throws the would-be assassin off the roof. Harley tries to go through the front door of the building but runs headlong into Barmy, knocking them both out cold. Wonder Woman flies off with the unconscious pair with an exasperation familiar to anyone reading Harley Quinn and Power Girl.

Our heroes, now properly attired, save the London Legion of Superheroes and they all head off to the pub for a celebratory drink. After a night of drinks, questions, thievery, and more drinks the inebriated Harley is carried off, literally, and invites everyone to Coney Island for a visit. She has made new friends. The End.

First of all, this is a Palmiotti and Conner Harley Quinn story through and through. If you like their take on HQ you will love Harley’s Little Black Book. Harley is as tough, goofy, flirty, insane and out of control as usual. It is an interesting twist having her worship Wondey. Harley fans should appreciate seeing her as a troubled child. One panel I particularly appreciated was seeing Harley’s eyes well up fighting next to her hero. It’s the little things.

All in all, the story is pretty paint by the numbers. I’m not following the Wonder Woman books so I’m not sure why we traveled to London but seeing the London League of Superheroes was a nice, off the wall touch. Some fights, some comedy, some derring-do. Just don’t look too closely at the minor plot points and you’ll be ok.

The art is by Amanda Connor and John Timms, inks by Dave Johnson and colors by Paul Mounts and Hi-Fi. The ‘present day’ plot is in a style familiar to regular readers of Harley’s main book. It is clearly drawn and as usual I like the way that Harley’s skin is almost luminous and her face is very expressive. The flashback sequence is in a softer style and it is very interesting seeing Harley in a Wonder Woman mask.

Overall, as a Harley Quinn fan I enjoyed this issue. It isn’t groundbreaking and kind of feels like another issue of her main book. I’m not complaining but don’t expect it to be out of the ordinary.