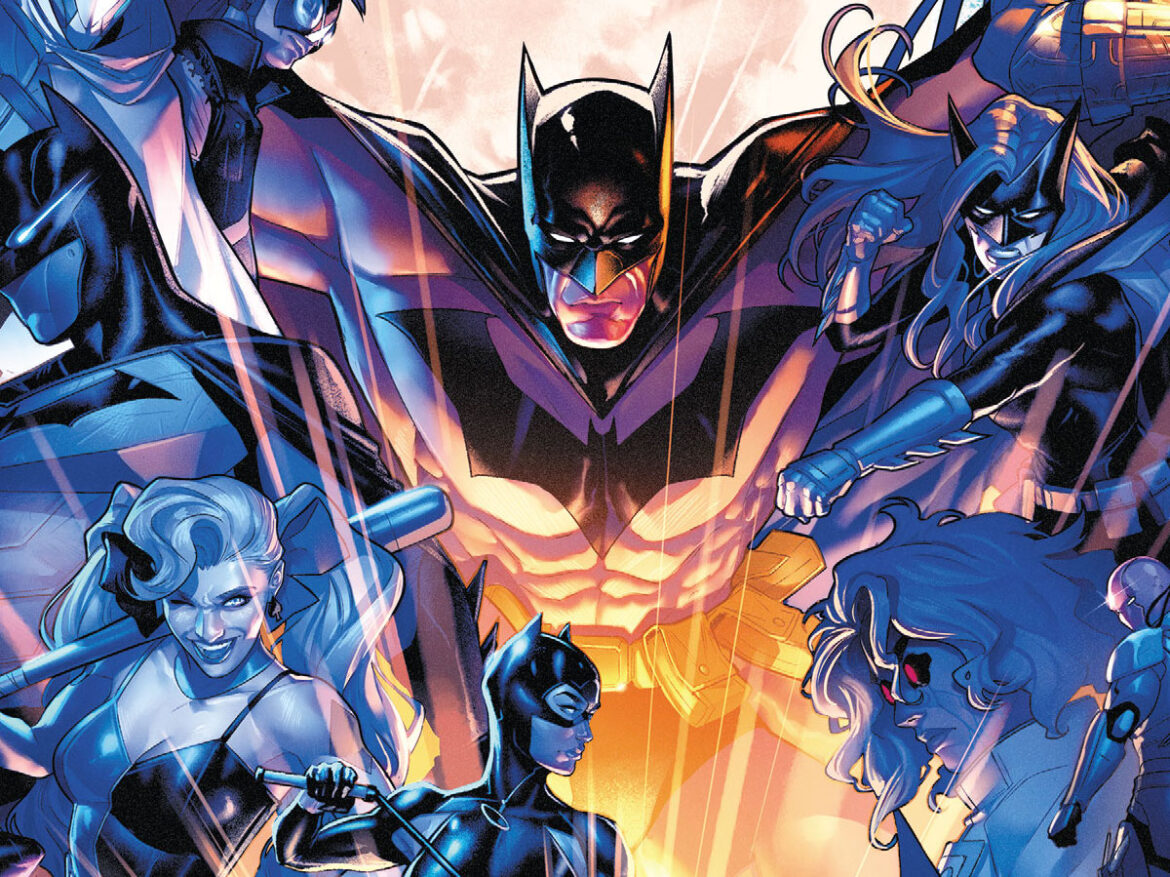 In Inside Batman #010, we looked at the opening plans for Tynion’s Batman run post-Joker War, when he found out he was on the title permanently rather than leaving once Batman #100 was complete. In this column, we’re going to examine the overall goals Tynion was trying to accomplish with this batch of new characters and directions for Batman as set forth in his final newsletter.

Thoughts: I’m not completely sure if Tynion actually reversed power creep as simply ignored it – his Batman was often criticized by people who much preferred the more godlike Master of Gotham City seen in Morrison and Snyder’s runs as being a supporting or background character in his own book. I completely agree that making Batman so powerful has had a negative impact on his stories and his world, but it’s extremely popular with both writers and fans, so it’ll be quite interesting to see where Joshua Williamson takes it (or whoever takes over Batman after “Shadow War” finishes up).

Thoughts: I think we see again the identification Tynion has with this version of Batman – and I think, to some extent, all writers have with Batman – Morrison’s identification of Batman as the parents who divorced during childhood and also a spiritual guru who’s spent his whole life searching for arcane knowledge, Snyder’s casting of Batman as the man who doesn’t have it all planned out, who is just trying to do his best in a world that seems overwhelming (but also one who perhaps overcompensates with extreme cockiness). It’s also really cool that Tynion and Tamaki worked so well together in showing the sides of Bruce in this new status quo driven by Tynion – “The Neighborhood” by Tamaki really highlighted Bruce as a man and redeveloped his civilian supporting cast in a way that had been decimated by all the power creep. Given all my meditation here on how Batman is the identification figure of the writers (and often the readers, which explains why people react so violently when they can no longer identify with him), I am really curious what aspects of Bruce that Tamaki is drawn to – and perhaps it’s telling that in “The Neighborhood,” “Fear State,” and the just-begun “Shadows of the Bat,” we see Tamaki giving huge emphasis to characters like Huntress and Batwoman – female outsiders to the Bat-Family who nonetheless are competent and brilliant.

Thoughts: Tynion’s explicit goal here perhaps explains the frustration of so many, as I highlighted above – that Batman doesn’t have as much agency. In many Batman stories, he is the King of his relationships – he employs Alfred, he trains his Bat-Family. In Tynion’s Batman stories, he has characters who have their own agendas and don’t work as closely for Batman. An interesting dynamic, but one which I think does lead to a bit of frustration from those who prefer Batman to have more control over his personal life and perhaps even agency in the larger story.

Thoughts: A reiteration of one of the earliest elements of Tynion’s pitches for Batman – Batman is “further along in the timeline” – but it’s also cool seeing how he deliberately tried to structure his Batman, so he didn’t feel old.

I’m not JUST proud of my work on BATMAN and JOKER, I’m proud of the entire line of Bat-Books that rose around my titles. It’s a good feeling when even folks who just never vibed with my take on Batman were reading and enjoying the satellite books that came from the same documents and conversations. For a long time, I had big dreams about what a united Gotham could look like in a publishing line, and under Ben Abernathy and his incredible team of editors, I think we’ve got the most united, most vibrant era of Bat-Books in memory. It’s the sort of line that I would have loved to read as a fan, where there aren’t big key pieces of the mythology put on a shelf and tucked away. Where the Bat-Family are kept at odds and apart because of company mandates. All the pieces are in the right places, and the line is singing.

I’m exceptionally proud of having some hand in putting it together. I hope it continues as a strong unit of titles for years to come, without me.

Thoughts: Longtime listeners to the TBU Comic Podcast know that we were and are extremely excited about this particular aspect. And largely, despite some pitfalls, I’d say Tynion achieved that from the middle of “Joker War” to the middle of “Fear State” – only for the “Fear State” books to fall apart a little bit in cohesion at the end, as he had to let go of the reins given his impending exit from Batman. It’s not something that is often appreciated by people who look at the history of the Bat-books in trades and don’t see the experience of reading four to ten Bat-Books a week, trying to figure out how they all fit together. Is that experience really valuable? Does it truly matter? I’m not sure, long term, but it sure is more fun as someone who DOES read and review all of those books when there’s a sense that they’re not fighting with each other, which too often Snyder and King’s books felt like they were doing.

Sadly, I don’t think that we’re going to see that kind of cohesion for a while. Williamson’s run will integrate with his two other books, Deathstroke and Robin, and whether he continues or not will determine the course of that – but signs seem to point to Batman by Williamson being a bit of an international jaunt, rather than something which really sits in the world of the other Bat-Books. Taylor’s Nightwing and Cloonan and Conrad’s Batgirls are already drawing some criticism (though not from this reviewer) for their clashing portrayals of Babs and her relationship with Dick, and the Harley Quinn title has never really had that much connection to the main Bat-books, and seeing how Phillips managed to keep it so connected to the “Fear State” preparations was impressive, but seems unlikely to last.

This last year wasn’t designed to be my last. It’s been strange putting this post together over the last week, and looking at my story concepts that would have taken me through 2023. There are some really good ideas in those documents, ones that could only ever work in Gotham City, and there’s definitely a wistfulness knowing that I’m not going to get around to write them any time soon. There are seeds planted that we’ll see if anybody cultivates into the little gardens and forests that I believed could make Gotham City a richer, more vibrant place. I hope they do, even if they negate the stories I’ll never tell. I left all of these toys in the toy box to be played with, not to be set aside until the day I might possibly come back to them.

Thoughts: Unlike Snyder, Tynion isn’t quite as firm about never coming back to Batman or Gotham, but he is firm that he’s not going to do it any time soon. We’ll see if he still has the name and interest enough to come back in two to three years, or however long he’s able to thrive in the ecosystem he’s creating. We here at TBU wish him the best, of course, but I personally will miss him intensely, as his Batman Eternal was what brought me back to Gotham after three long, cold years of New 52 burnout and disappointment, and his writing has kept me around in Batman and Robin Eternal, Detective Comics, and of course Batman ever since.

This week I’m wrapping up JOKER #13, which means that pretty soon, I’ll only have one more issue of a comic in a super-hero universe, and I really don’t have any intention of coming back to capes and tights for a while.

Thoughts: More interesting little notes on production schedules – this newsletter was written the first week of January 2022, set to come out March 8, so approximately 3 months prior to the release date.

This wraps up what Tynion wanted to accomplish for overarching goals for his run on Batman during the “Fear State” preparation and execution. Next time, we will delve into his massive thoughts on Batman for the future, and say goodbye for now.