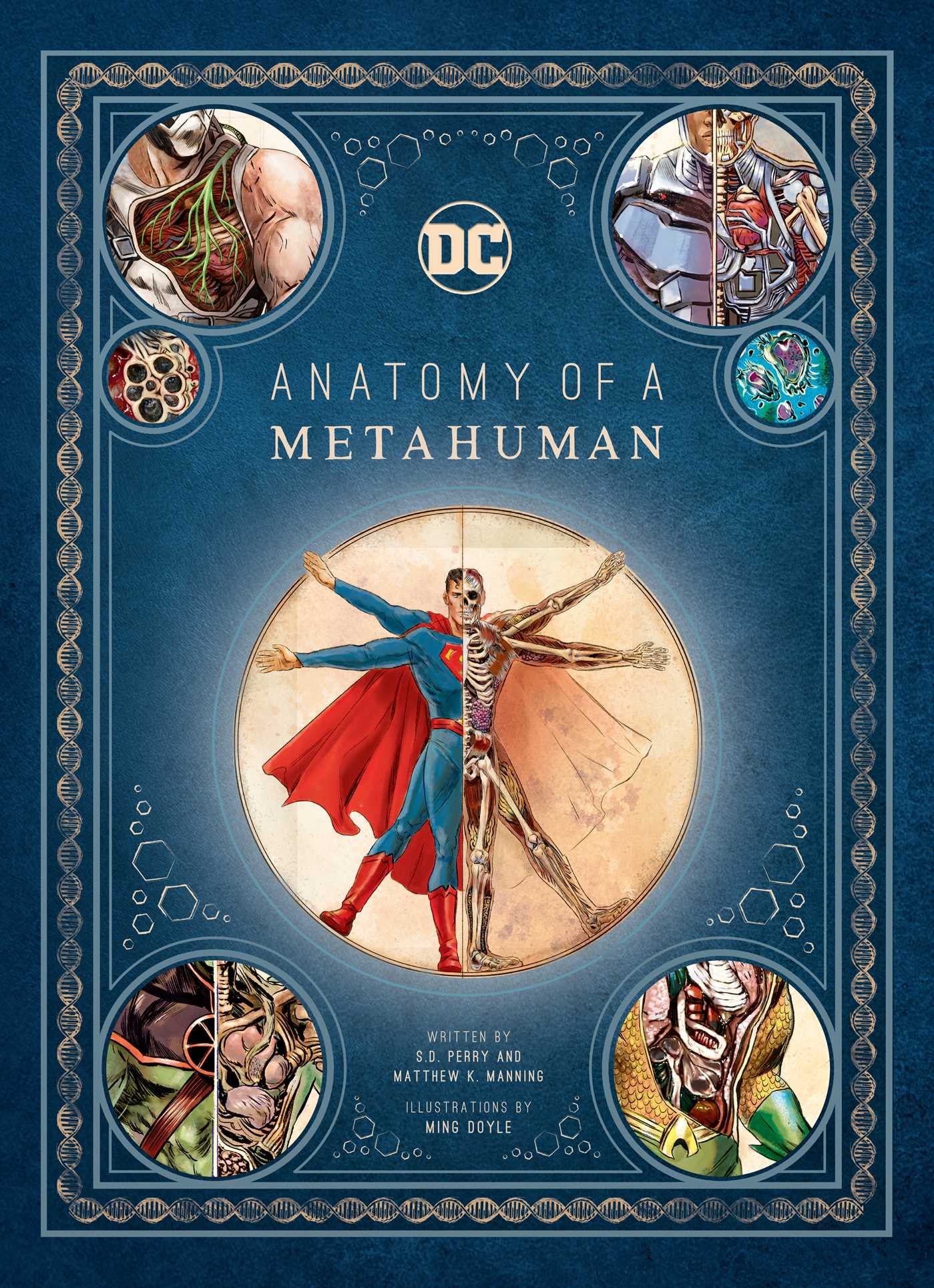 Overview: Ever wonder what’s underneath Superman’s steel-hard skin? Or the secrets of Killer Frost’s hair? This book has you covered!

Analysis: DC has been teaming up with Insight Editions to publish some really beautiful books in what I call the “coffee table” format (see our previous review of DC Comics Variant Covers: The Complete Visual History). One of the most hotly anticipated of this line of books is Anatomy of a Metahuman, a gorgeous collaboration between writers S. D. Perry and veteran DC reference author Matthew K. Manning and artist Ming Doyle (Constantine: The Hellblazer), with colors by Scott Holladay. Exploring twelve characters in great detail over 159 pages, the book dives deep into heroes and villains alike, all through the clever framing device of Batman taking notes on each of the metahumans with an eye to how to take them down if he ever faces them in combat.

First and foremost, the book is a real treat to read. Physically, the cover is heavy, richly but subtly colored, bringing to mind anatomy textbooks and the famous Leonardo da Vinci human anatomy sketches. Both the front and the back covers have raised circles with pieces of art from the interior, printed in a different texture than the majority of the cover (shiny vs. matte), making it a pleasure to run your fingers over the book even before opening it. Heavy, tan-colored pages, wrapped with thickly textured blue-green endpapers, continue the impression of an anatomy sketchbook created by the Dark Knight. Ming Doyle provides a huge number of beautiful illustrations on every page, with thick, pencil-textured lines, bringing to life the “speculation” of Bruce Wayne about the insides of people he can’t x-ray or use an ultrasound machine to explore (though perhaps the Atom would be able to help him explore his friends and foes’ anatomies, as they apparently have been doing that in the current Justice League title, like the Magic School Bus kids).

Perry and Manning never break character in the text, giving us a great Bruce Wayne voice: classically analytical, detail-obsessed, planning/paranoia focused, but still hoping for redemption and admiring of virtue for allies and enemies alike. One of the weaknesses of the book does appear in the text, though, as the writers attempt to give enough room for future comics writers to develop or change their conception of these characters by saying “science cannot explain” or “the rules of physics do not apply here” – and phrases like these appear for almost every single character, leading to a slightly repetitious feeling (no doubt even a textbook on real human anatomy does feel slightly repetitive, though one doubts you’d buy such a book to put on your coffee table).

Of particular interest to Batman fans would be the notes on Batman’s relationships with Superman, Wonder Woman (who does not appear in the book, but is mentioned several times), the other League members, and Bane. Among many standout entries are the detailed history of Bane’s venom, the speculation on Killer Frost’s past and future, and the constant “I don’t know how this works” for the sheer scale and number of Superman’s powers (a common problem, as most of these characters, have gained far more powers in the 80-year history of DC comics than they were originally given). Sometimes, due to the specific connections between some obscure powers and particular storylines, we get potted summaries of storylines (which might have been nice to have editor’s notes telling us what comics to read…) The continuity of the framing device is surprisingly specific – it’s clear that this book is “set” during the first year of Rebirth, referencing Greg Rucka’s Wonder Woman run for Cheetah’s status quo, though comments about Clayface being unavailable seem odd, since James Tynion’s Detective Comics run during the same time portrays the one-time villain as teaming up with Batman and his partners.

A list of sixteen characters who might be explored in a future volume hints at a possible second book, though hopefully, the writers exclude characters who are too similar to the current examination. Supergirl, Amazo, Mr. Freeze, and Captain Cold particularly seem a bit redundant, though Wonder Woman, Flash, Clayface, and Plastic Man seem particularly interesting, especially the characters who have more singular rather than plural powers, so a more consistent explanation for them could be proffered by “Bruce”.

Parental Note: Unlike the recent Batman: Damned #1, this book is completely safe for kids, unless they are particularly distressed by seeing a clinical treatment of internal organs.

Final Thoughts: A beautiful coffee table book, serving up a feast for the eyes and some fun tidbits for the mind, with a really fun framing device for Bat-fans.

Editor’s Note: Insight Editions provided TBU with a review copy of this title. You can purchase your own copy by heading over to Amazon.