Review: Red Hood and the Outlaws #18 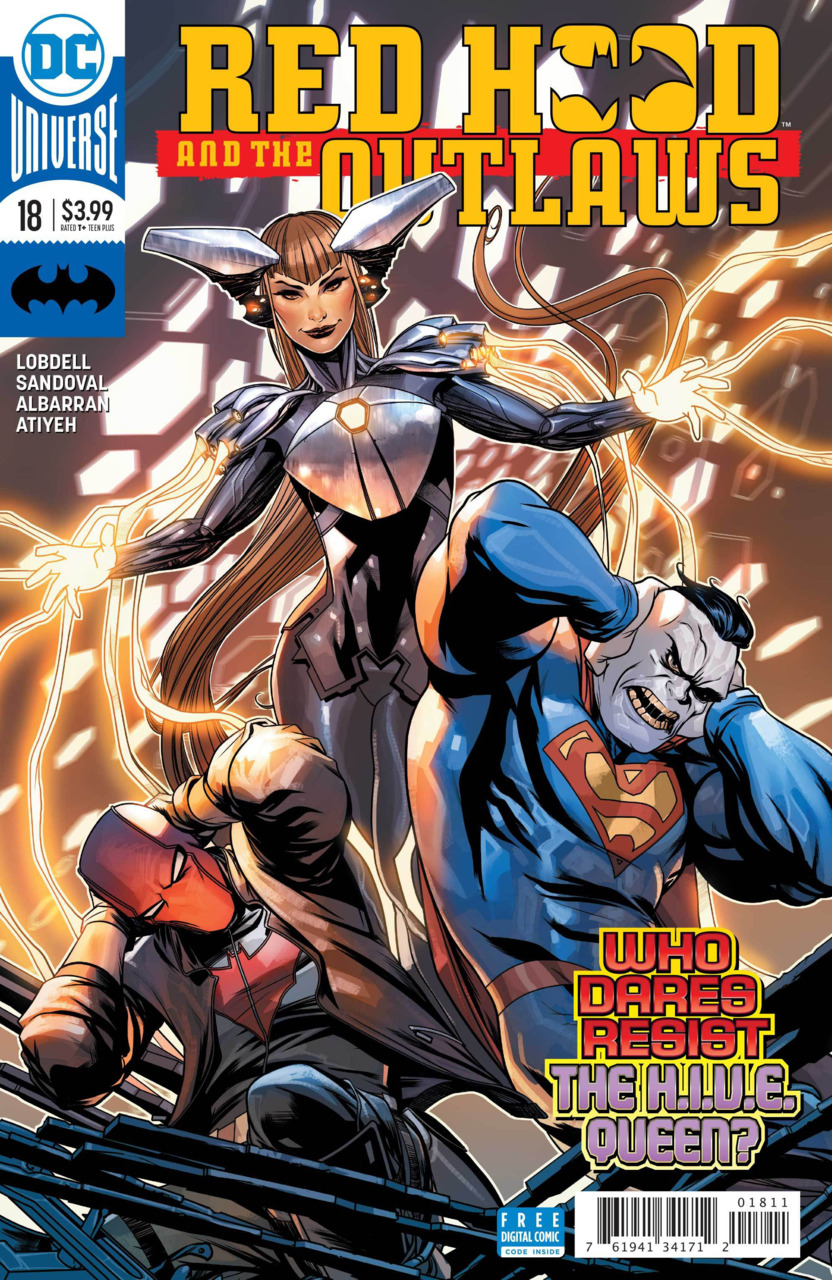 Overview: While Red Hood & Artemis deal with both outside and potentially internal threats, Bizarro battles his inner conscious and sanity.

Synopsis (spoilers ahead): Opening beneath Gotham City, Red Hood faces off with the HIVE Queen and her minions. While Artemis and Bizarro watch from their floating fortress, Red Hood uses an amplified taser through his chest emblem to take out all the queen’s henchmen. Artemis is impressed by Bizarro’s upgrades but Bizarro is distracted by the imaginary Pup Pup, the Superman doll given to Bizarro by Jason when they first met, who tries to tell Bizarro to come clean to his friends about what he has been up to. Bizarro refuses and begins to work on some wiring issues while monitoring Jason.

Underground the HIVE queen begins to read Jason’s thoughts and sees something buried in his subconscious, but is unable to tell Jason as Bizarro swoops in and knocks her unconscious. Jason is annoyed but Bizarro explains that he analyzed the enemy and she was about to destroy Jason’s mind. Jason buys the excuse and Bizarro offers to clean up the mess so that Jason can go visit Ma Gunn.

Jason arrives at the house but finds it deserted and has an uneasy feeling something has happened to Ma Gunn. He does find a note from Ma Gunn explaining she is away visiting family but her home is open to the Outlaws.

Arriving back to the fortress, Jason and Bizarro are interrupted by Jack Ryder (AKA Creeper) fighting Artemis. Pup Pup continues to plead with Bizarro to tell them before they find out anyways and that they can’t help him if he does not tell them. Just when it looks like he will come clean, Bizarro only apologizes for recruiting Creeper to the team without consulting Jason and Artemis. They accept his apology and Bizarro then excuses himself to rest.

The issue ends with Bizarro descending a staircase into a bath of synthetic Kryptonite. Pup Pup begs him not to do it again but Bizarro is convinced he is doing this for the good of the world.

Analysis: Despite some weak subplots going on in this issue between Red Hood fighting Hive Queen & Artemis dealing with Creeper’s recruitment, this issue finally gets back to the main point of this arc dealing with Bizarro’s intelligence and new behavior. It has been a strange path the creative team has taken to move this story along but it definitely can be said we have a good feel for this new Bizarro. By no means do I think this is a negative since it is a new take on the character but the crossovers and numerous subplots (Ma Gunn’s relationship with Jason, Gotham Knights against the Outlaws, etc.) have drawn away from the central theme.

The use of the synthetic Kryptonite by Lobdell has the potential for being very interesting but could diminish the severity and mystery of Luthor’s help in bringing Bizarro back to life. I can not recall whether Luthor used synthetic Kryptonite to revive Bizarro but please let me know in the comment section if I have forgotten this detail. Regardless of its history, the implication that these Kryptonite baths are causing mental instability within Bizarro is very interesting and begs the question as to why he would undergo such a risky experiment. The dialogue between Bizarro and his Jiminy Cricket-like conscious “Pup Pup” was very entertaining to read and provided both comic relief and an undertone of gravity to the situation knowing that Bizarro is heading down a path that he knows deep down is wrong. Lobdell certainly leaves this issue off with a cliffhanger so hopefully we get some answers soon.

Artwork in this issue was sporadic at times. Sergio Sandoval on pencils did a good job at portrayal of the characters, but had times when he was not consistent with his depictions of them in the quieter moments. Jason looked like a forty year old at times when he was not wearing the mask while Bizarro looked rather emaciated compared to how he has been depicted throughout the Outlaws run during Rebirth. Colorist Michael Atiyeh added a lot to this issue with his capturing of the city both underground and the night lights as Jason cruises around Gotham.

Final Thoughts: Overall, the issue is leading us closer to the ending of this arc and I am definitely looking forward to seeing what Bizarro is up to and the consequences of his actions.