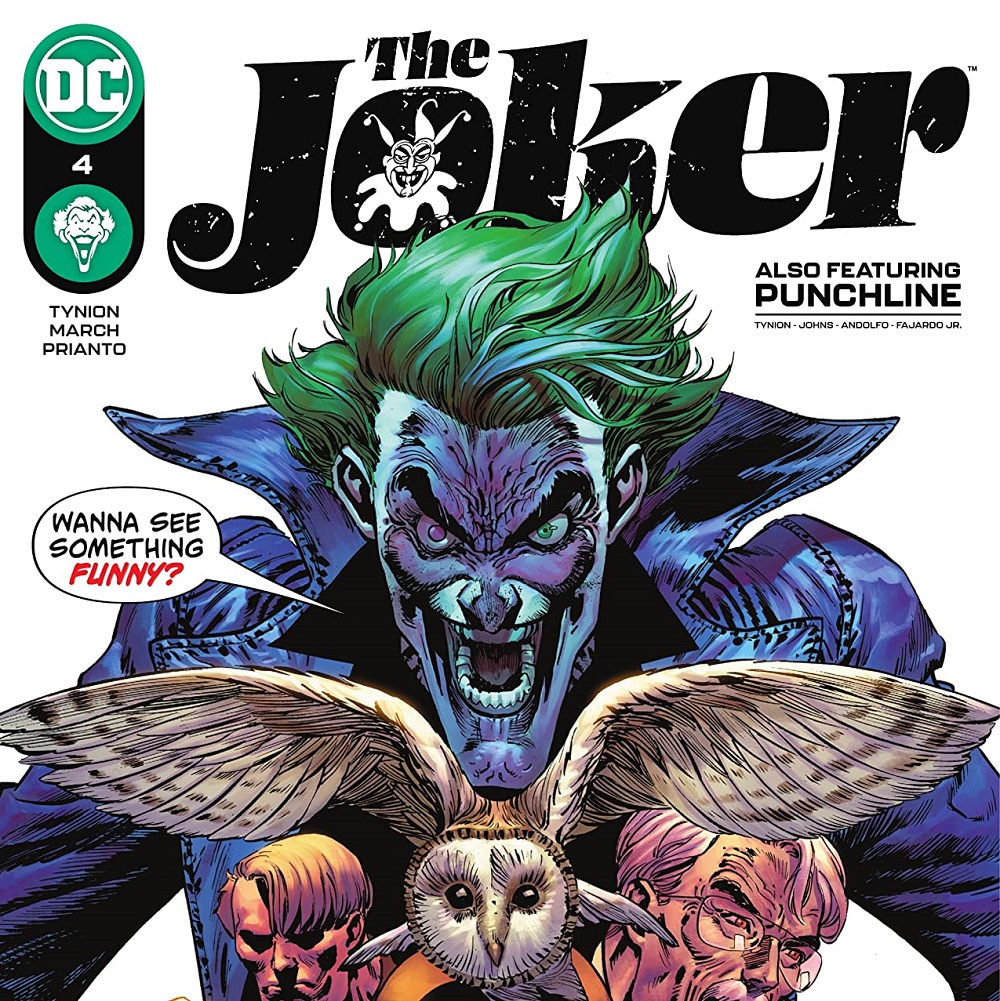 Overview: In The Joker #4, Jim Gordon finds himself in over his head, trapped between Joker’s small army of mercenaries and the groups of people sent to kill the Joker.

Meanwhile, James Gordon self-reflects. He thinks about how easy it was to lie to his wife years ago, to convince her he was saving people, when in reality, Gordon wasn’t the good man he once believed he was. Meeting the Joker changed Gordon’s self-image, and Jim saw himself in a new light, as a broken old fool who pushed everyone who loved him away.

While Joker, Bane’s daughter, and the dwindling mercenaries fight each other, Gordon aims his gun, from afar, at Joker. He thinks about how he could kill the Joker, but it still doesn’t feel right. Jim feels out of his depth, and just as he’s about to call Barbara to update her on the situation, the Sampson siblings, Vicky and Buddy, enter the fray. The Sampsons are here to claim Joker and bring him back to Texas.

Bane’s daughter disagrees, telling the Sampsons that Joker is returning to Santa Prisca for an execution. Joker takes the momentary impasse to detonate some nerve gas canisters he hid earlier. Everyone is knocked out, and Jim is haunted by horrifying images of the Joker capturing him.

Back in Gotham City, Stephanie Brown updates Barbara Gordon on her mission to follow the money via Cressida’s bank. She turned up no leads. Barbara and Cassandra Cain, alternatively, have turned up no leads on their end either, even after staking out Cressida at an elite hotel. As Barbara mulls over this dead end, a Talon lurks behind her.

At an undisclosed location, Joker is sewing up the mouth and eyes of Buddy Sampson when Joker notices that Jim is finally waking up.

Joker decides it’s time that Gordon and himself have a chat. Mr. J then proceeds to tell Jim about how Jim grounded Batman. He also calls Batman a hypocrite, pointing out Batman’s belief in the system. Alternatively, Joker is keenly aware that Jim doesn’t feel the same way, that Jim understands the reality of the world and used Batman as a tool for order.

After the two discuss Gordon’s resolve to fight evil, despite not believing in his own goodness, Joker tells him that he wants Gordon to solve a case for him. Joker insists that it was not he who assaulted Arkham Asylum in Infinite Frontier #0. Joker didn’t even kill Bane, but he believes there’s someone out there who saw his grand designs for Gotham, and it scared them. Joker’s plans scared this person, or group, so bad that they set up the attack to put in motion the attempted assassination of the Clown Prince of Crime. When Jim asks why he has to solve the case, Joker tells Jim that it’s because he wants Jim to know how ineffective he’s been as a police officer. There are people who make the rules out there, and they are the ones who want to off Joker. These rule-writers are the ones who calculate the grand design for how the world works, including superheroes and supervillains.

After ripping Buddy’s face off, Joker leaves to deal with the other member of the Sampson Clan. Jim struggles to escape his bonds, and he is freed by Bane’s daughter. Bane’s daughter tells Gordon to go home, to head back to the light before he drowns even further in darkness.

Analysis: This is yet another perfectly paced issue wherein writer James Tynion and artist Guillem March keep adding new elements to the mix to both raise the stakes and keep this series exciting and fresh.

In The Joker #4, we start off learning more about how Jim Gordon views himself, about how he analyzes his failures and musters the resolve to push ahead anyway. Unlike Batman, Gordon is a realist, doing what he has to in order to stop evil. It’s not about being good or searching for his own goodness, to Jim, it’s about hunting down and taking out more evil than was there yesterday. It’s a singular focus, one that grows from the root of a man who feels he’s been a broken, old fool.

This self-reflection adds a new dynamic to the character of Jim Gordon. After all these years, we see how he lives with himself, and it’s not very well. Gordon feels alone, and he clings to the only thing he knows, police work, to carry him through. In this way, Jim feels real. He’s both fragile and hardened at the same time, and he’s had a lifetime of reflection to find some sort of middle-ground with himself. It’s terrific character development, and it plays out while the army of Bane’s daughter dukes it out with Joker’s mercenaries.

The art continues to be absolutely fantastic, especially the sequence in The Joker #4 which Joker releases his nerve gas. Arif Prianto’s colors are psychedelic and add a horrifying haze to March’s pencil work. Tom Napolitano’s lettering also adds an extra dimension of character to this issue, The lettering for Joker comes across as unhinged. Bane’s daughter, as well, carries a broken umph that adds coldness to her already frozen demeanor.

Overall, we get an explosive payoff to the last issue’s cliffhanger, and readers are left with several other cliffhangers. There’s a Talon clearly keeping tabs on Barbara Gordon, Joker’s talking about flying the coop to Europe, and Jim has been clued in on some sort of secret entity or group that’s orchestrated this whole event. In Jim’s case, it means he’s just another pawn on the chessboard, and it’s a board in which the true kings and queens have yet to be revealed.

Synopsis: The backup in The Joker #4 begins at Blackgate Penitentiary, as an orderly finds Punchline bloodied and beaten and calls it in.

Meanwhile, Harper Row struggles to escape from a death trap at Snyder College. She uses her grapple to break a window and pull herself to freedom. It’s just in time, as Dr. Leslie Thompkins calls Harper, asking her to return to Gotham. Apparently, Punchline has another friend from college who is currently in Blackgate.

In a hospital bed in Blackgate, the Queen of Spades, Orca, and two gang members threaten Punchline. Little does the Queen of Spades realize, but Orca has switched allegiances. Orca takes down the Queen, and the issue ends with Punchline smiling at her new crowning as queen of the penitentiary.

Analysis:  This chapter is just a reverse of course from previous chapters thus far. Harper Row escapes her death trap, only to be summoned back to Gotham. Meanwhile, Punchline gains the upper hand against the Queen of Spades, thus claiming her sought-after title at Blackgate.

The art is fun, and the colors are vibrant and beautiful. The story, however, feels like one of those old-fashioned serials that used to play before feature films. There’s not much substance, just action that reverses course on the happenings of the previous chapter, all the while ending on a new cliffhanger that encourages readers to “tune in” next month. It’s quite the tonal shift after such a great, deep, and wonderful issue of The Joker.

The Joker continues to build upon itself and take readers on a globe-spanning journey that promises to show readers exotic locations, as well as dive even deeper and deeper into the psyche of Jim Gordon. While it’s fun to chase the Joker, Gordon is truly the star in this series.