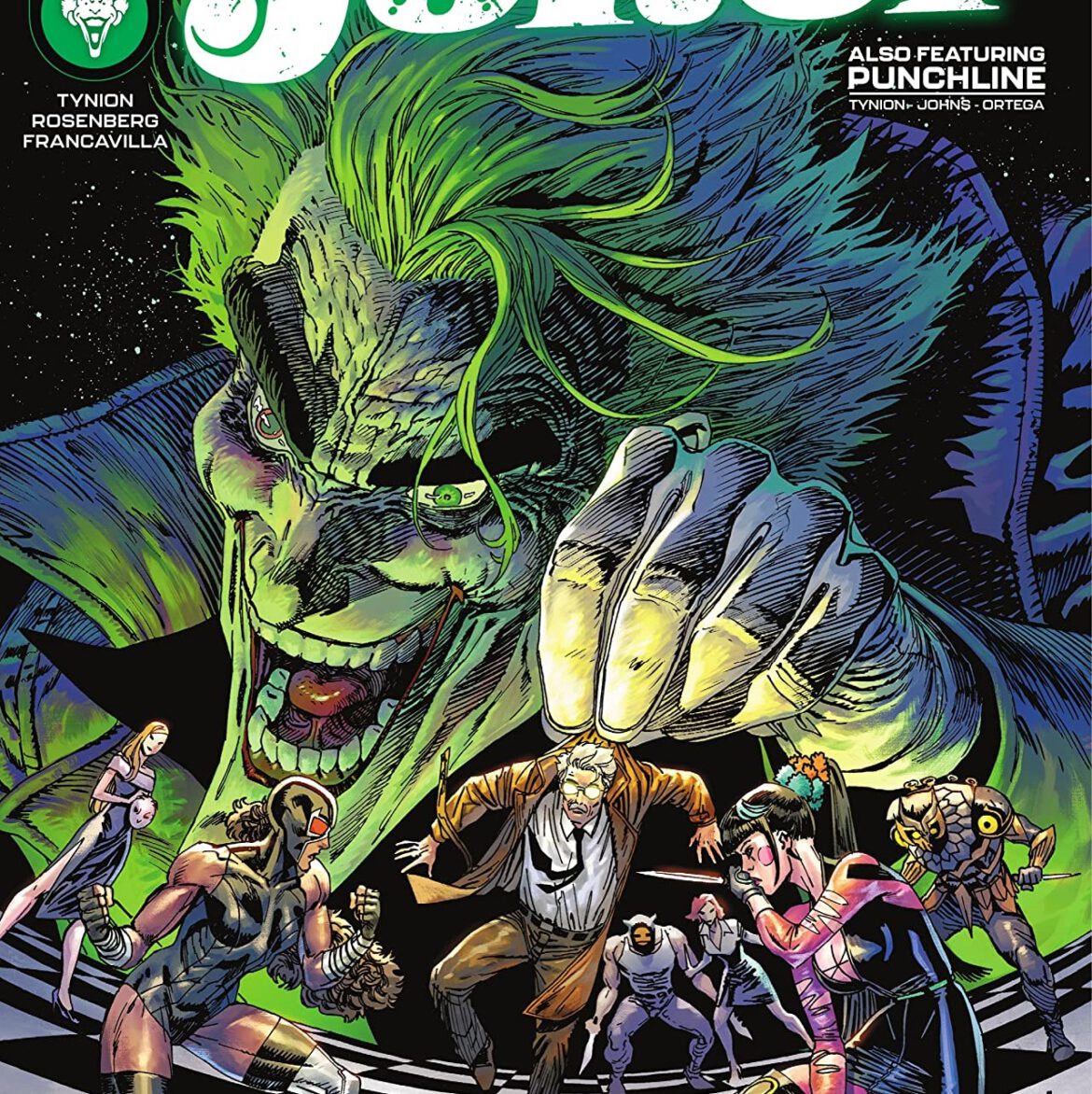 Overview: In The Joker #10, Jim finds himself on psychiatric leave after the Joker crippled his daughter, and he struggles with giving up the chase for the sake of his family.

Synopsis: The Joker #10 begins years ago, as Commissioner James Gordon comes home to find his daughter, Barbara, struggling to pour herself a bowl of cereal. She’s in a wheelchair, and she’s still learning how to maneuver around after the events of The Killing Joke. When Jim cleans up after her, Barbara gets upset at the idea of having to be taken care of for the rest of her life. She argues with her dad, telling him that the Joker broke her and that he broke her father, too.

Jim leaves and heads to the GCPD. He tells the acting commissioner, Dave Wojcik, that he’s back early and can resume his duties as commissioner. Dave tells Jim that Gordon should be on psychiatric leave, but after some Joker sightings pop up in Gotham, Jim can’t help but force his way back onto the force. Dave tells Jim that those sightings are of a copycat and that the GCPD will handle the Joker on Jim and Barbara’s behalf.

When Jim returns home, he finds that his ex-wife, Barbara, and James Jr. have joined them. Jim’s ex-wife tells him that he needs to take their son for a while. James Jr. isn’t well, and he’s obsessing over this “comedian” character that harmed his father and sister. Barbara shows a clipping of the Joker from the local paper, indicating that that’s the “comedian.”

Jim and his ex-wife argue about who will take their son. Barbara finally tells Jim that her new husband, Martin, is afraid of who James Jr. is growing into. She leaves in a huff, despite Jim’s pleas for her to stay for dinner.

After dinner, Jim cleans up, then goes looking for his son. He finds James Jr. in his office, perusing through confidential files on the Joker. Jim yells at his son. James Jr. tells his father that he wanted to see the man who hurt his family, so he could watch out if the Joker came back.

After sending James Jr. out of the office, Jim notices a shadow outside of the window. It’s Batman. Batman wants to check up on Jim, but the two argue once Batman tries to talk about mental health. Jim sends Batman away.

The Joker #10 continues the next morning, as Barbara makes breakfast for the family. She does it as an apology for being a brat, telling Jim that she’s going to have bad days and that she’ll need her father to help her with bad days sometimes. When Jim goes looking to wake up James Jr., he finds that both his son and his firearm are missing.

Jim goes to the GCPD and tells Harvey Bullock that his son is missing. Harvey tells Jim to go home, that the police will handle it. When asked if James Jr. took anything, Jim lies to Bullock and omits the missing gun.

As he leaves the GCPD precinct, Renee Montoya offers to give Jim a ride. They drive around for a while, listening to the crime reports. When they get an alert of a man and a child with clown face paint, Montoya drives to the Dini Skating Rink, where the pair was last seen.

At the rink, Montoya tells Jim to wait outside. He tells her that he won’t wait around. Reluctantly, Montoya hands Jim a gun, and the two enter. Jim finds the man and James Jr. first. Both are wearing Joker makeup, and the man is holding a firearm. Jim aims his gun at what appears to be the Joker, but Batman intervenes, telling Jim that that’s not the real Joker.

Batman takes down the copycat, who was only holding a water pistol. Jim questions his son, who tells him that the man abducted him. Jim knows better, noting that witnesses saw James Jr. and the man laughing and having fun prior to entering the rink. Batman tells Jim that he’s a good man who has been through a lot. Batman then produces Gordon’s gun, which he found on the scene nearby.

Batman tells Jim that the only fingerprints on the gun are Jim’s and his son’s. The copycat didn’t touch the gun. Also, the copycat had circus facepaint on, and James Jr. was wearing cosmetic face paint that he most likely stole from Barbara. Batman tells Jim to get help for his son and himself, telling the commissioner that his family needs him.

Analysis: The Joker #10 is another flashback issue, coming on the heels of The Joker 2021 Annual #1. This time, the flashback takes place after the events of The Killing Joke, and it details how Jim Gordon repeated his previous mistakes that led to the dissolution of his marriage by throwing himself even harder at his work over taking care of his family. Whereas his previous obsession with stopping the Joker led to his wife, Barbara, divorcing him and moving to Chicago, this issue sees Jim suffering even greater losses.

His daughter, Barbara, is crippled and in need of support at home, and his son, James Jr., is also obsessing over the Joker, even going so far as to don his own clown makeup and steal a gun. The gun belonged to Jim, and Jim kept it in his office, despite Barbara’s protestations that she didn’t like guns in the home.

Everyone around Jim does what they can to help him, and unless they’re offering him the chance to work a case and help track down these Joker copycats, he pushes them away. Jim pushes Barbara, Bullock, Batman, his son, and the acting commissioner away all because he’s too blindly focused on catching the Joker himself. It’s a lack of trust, in some ways, and an unwillingness to let go, as evidenced by his attempts to clean up after Barbara when she tells him that she can clean up herself. Instead of trusting her or letting her do it, he willfully intervenes.

The Joker #10, as well as the other flashback issues, are clearly foreshadowing something as we near the end of this series. Jim, most likely, will have to learn to let go of the Joker at some point. He’ll have to learn to walk away at the right moment, to put away his weapons, and head back toward those who need him most. If he can learn this, he can save what’s left of his family and permit better-equipped crimefighters to take the reins.

Despite The Joker #10 being yet another flashback issue after the annual, it feels necessary to the overall story, serving as a counterweight to Jim’s rationalization for why he needs to kill the Joker. For Jim, it’s doing what his former mentor in Chicago could not in catching and killing the boogeyman, something Jim feels that he should have done years ago. His inaction those many years ago haunts him to this day, and he’s resolved to end it once and for all.

For everyone around Jim, Joker is a placeholder for the ultimate evil. Readers saw in The Joker 2021 Annual #1 that when things were good, Jim found ways to stay late at work and occupy his time. He played into Joker’s hand by “cleaning up” the GCPD, sending a bunch of out-of-work triggermen into the hands of criminals like the Joker, thus undoing what Jim spent so many years trying to accomplish in Gotham. Jim doesn’t let go, and the series feels like it’s trying to tell readers that if it’s not the Joker, it’ll be someone else. There will always be a “Joker” out there for Jim to be wary of, and if Jim’s not careful, he’ll shoot someone who doesn’t deserve to die.

Francesco Francavilla once again provides art and colors for this issue. He also did the art for the annual, so his work here lays down a familiar tone to these flashbacks. Since time has passed between this flashback and the last, Francavilla subtly alters the way Jim is presented here. That fiery orange-reddish hair is gone. Jim has a snow-white mustache and hair now, and his son has inherited that same classic hairstyle. This resonates with the mutual obsession both father and son have with the Joker. For Jim, it’s a criminal he wants to get rid of once and for all. For James Jr., it’s something much more disturbing.

The colors in this issue, like the annual, are absolutely gorgeous, and they give Gotham a mythical glow. Francavilla is a master with both shading and coloring, and the way he’s able to recreate a noir-style feel with his vibrant colors is both eye-catching and admirable.

Synopsis: Kelly Ness begins to tell her story of how she fled from Punchline. It’s a struggle, and when she pauses, the prosecution team gets frustrated. They believe her evidence is circumstantial at best and is wasting their precious time.

When the prosecution team leaves, Harper Row and Dr. Leslie Thompkins coax Kelly to continue, noting that Aiden, Punchline’s former friend, already burned the evidence (in The Joker #3) that Kelly pushed them toward.

Kelly continues her story, detailing how she wound up with a group of people on the street who taught her how to scrounge for food. One day, when she returned to her group after stalking the streets of Gotham alone, she found them all dead. Punchline had found her, and she bolted.

Meanwhile, Cullen Row learns more about his friend, Bluff. Bluff is a member of the Royal Flush Gang, and he picks up a bag of groceries from a nervous clerk only to deliver it to the family of a criminal who is currently serving time. Bluff tells Cullen that the Royal Flush Gang takes care of criminals, including their families. Cullen appears to be enamored by Bluff’s “charity.”

Analysis: The art is very pretty in this backup story found in The Joker #10, but we get very little movement on the overall plot. Kelly’s story doesn’t add anything to the narrative, and Cullen learning about the Royal Flush Gang doesn’t carry any known relevance to the story, yet.

The Joker #10 is a beautiful flashback story that provides a formidable reality check to Jim Gordon’s narrative throughout this series. This isn’t just about Jim stopping the Joker, it’s about his inability to walk away and take care of his own.