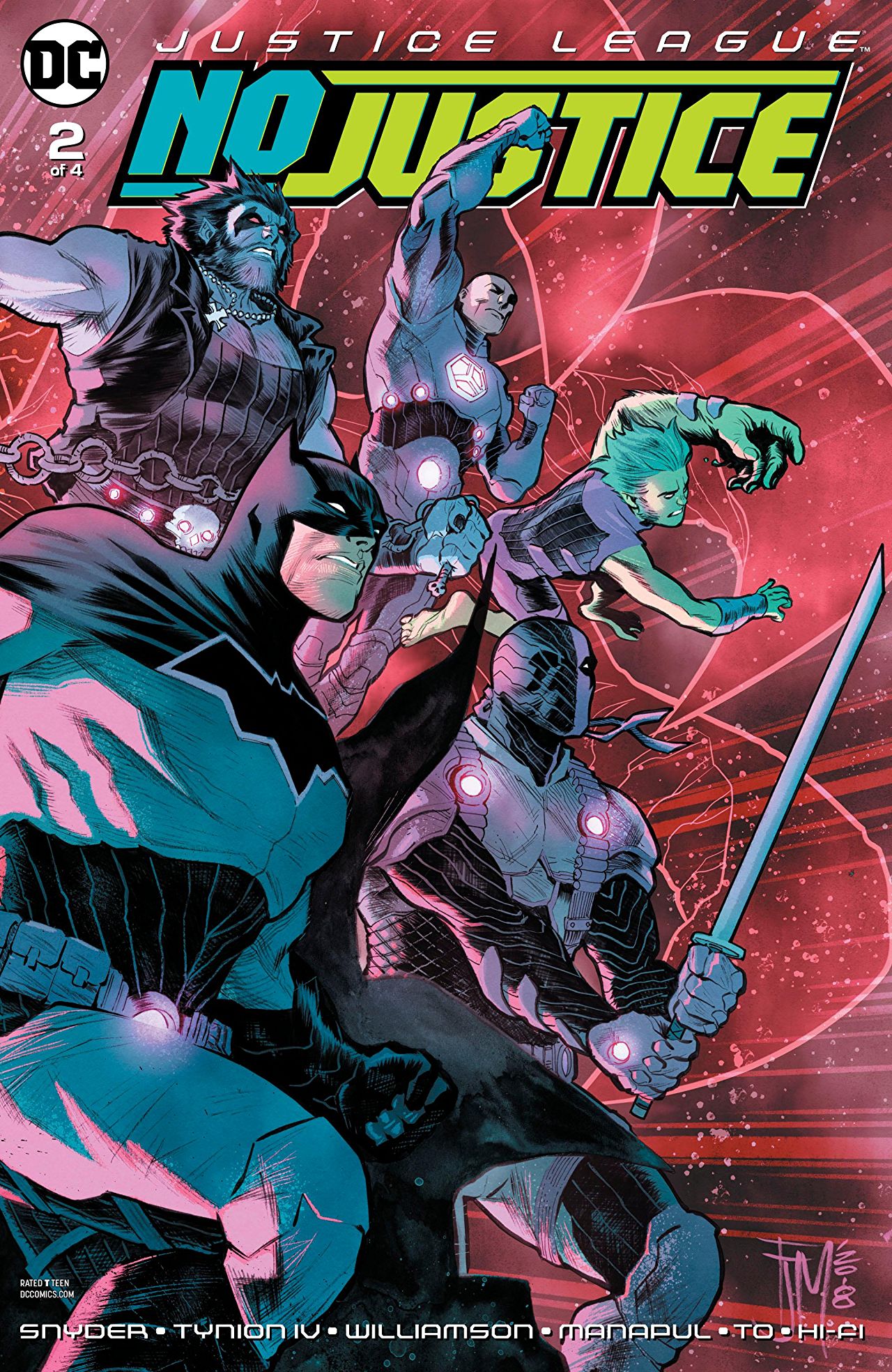 Overview: The Justice League go inside a tree… I just don’t know anymore.

Synopsis (spoilers ahead): In the Arctic Circle, just a few miles from the Fortress of Solitude, Amanda Waller has taken it upon herself to save the world. General Sam Lane initially questions her, but then decides to trust her over US Intelligence. Green Arrow stops her and asks where the Justice League are.

Back on Colu, the League is trying to figure out how to handle their current situation. Harley finds the Tree of Wisdom; it happens to be the giant glowing tree in the middle of the city. They, again, argue as to how to go about this, when Lex Luthor is the one to speak reason. He tells them that they should go along with Brainiac’s wishes and work in the teams that he had assigned them. He is, after all, one of the universe’s most brilliant minds. Conventional wisdom tells Damian that this is a bad idea, while Bruce is willing to go through with the bad idea, as long as he gets some answers.

Back at the Arctic Circle, Waller begins to give Oliver some answers – that the Justice League told the US Government that they had broken the Source Wall. So when Brainiac showed up and took the heroes, she wanted to know what else they weren’t telling her, so she used a group of psychics to rip any remaining information out of his head, and she learned of the seed that he planted on Earth. She’s here to get rid of the seed before it activates.

Oliver reveals to her that the other heroes are comatose. He’s the only one left. He’s here to do whatever she says. Waller likes the sound of this.

The League members have split up and found their trees. They all enter at about the same time when all of them are attacked by different sentient beings inside the trees. Team Mystery finds miniaturized planets inside capsules. They argue as to whether it’s ethical to release them or not. Team Entropy is being attacked by prisoners when Lobo convinces Beast Boy to cut loose. This trend continues as we see each of the teams being overwhelmed.

While on Earth, Waller and Oliver find the seed. They are too late. It’s been activated. Brainiac had a fail-safe built in – if he died, the seed would be triggered.”The League didn’t screw us, Waller. You did.”

Team Entropy senses a stronger force at the center of the tree. The make their way there and find Vril Dox, a.k.a. – Brainiac 2.0.

Analysis: Scott Snyder, James Tynion IV, and Joshua Williamson contribute to the writing in some fashion. I tend to believe that the fewer names a comic book has on its cover, the better chance you have that it’s going to be good. This book is proving that theory correct. Again, I still look forward to what this series is building to, but the series itself has fallen flat on its face. The pacing in this book is terribly slow – to the point where the book is boring. Not much happens here. They find a tree, they go inside the tree, they see someone inside the tree. I’m sorry, but that is just not up to the standard that these writers have set for themselves. Give me something more substantial, or cut the issue count by half.

Francis Manapul and Marcus To take care of the art here, and again, I’m let down. Marcus To is a good artist, but getting less Manapul when you were promised Manapul is disappointing. His art was clearly suffering in issue one, leading me to believe he didn’t have much time. By issue two, you get another artist to alleviate some of the page count. Not only is that jarring to look at, but it hurts the story because it kills the chance to build any momentum. The panel layouts are basic, and not in the flattering, classical storytelling way, but in a way that feels uninspired.

Hi-Fi colors this, and does an okay job. His colors seem to be so flashy, that nothing actually stands out on the page. Everything kind of hits you at once. I’d like to see some areas toned down. Help draw our eyes to certain parts of the page. Add some texture by layering some colors. I think it would help, anyway. AndWorld Design letters here, and does a solid job here. No complaints on my end.

Final Thoughts: From my end, everything about this book just feels disengaged. I see a lack of effort, a lack of planning, a lack of story. I don’t tend to mention the editorial team in my reviews, but they deserve a lot of the blame for the missteps of this book.