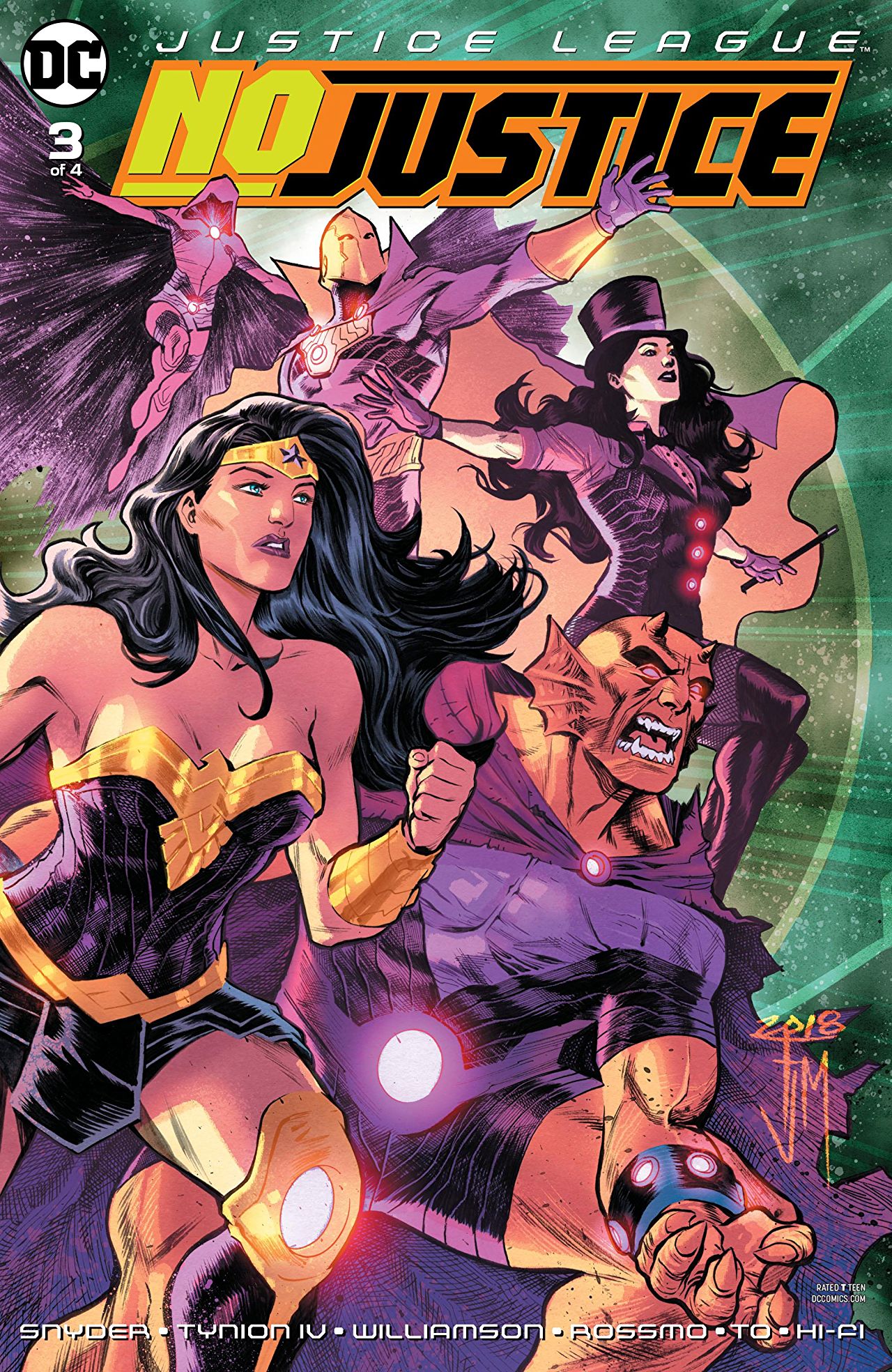 Overview: The Justice League run a “save the trees” campaign and it doesn’t go as expected, as the planet blows up.

Synopsis (spoilers ahead): Lobo pins Vril Dox to the wall and Batman threatens to feed him to the Omega Titans if he doesn’t help them out. Team Entropy assumes Brainiac would have a backup in place and Vril is the most likely candidate. However, Vril reveals to them that Brainiac’s plan involved them killing his 2.0 counterpart and downloading his data to himself. Brainiac would then save and conquer Colu, and send the Titans to Earth, destroying it and no longer leaving it as a nuisance to him.

Back on Earth, Waller has decided to do drop a nuke onto the seed, which will prevent the Titans from coming here at all. Oliver turns on her. If she destroys that seed, she’ll kill all the remaining heroes currently in stasis. “It’s either a handful of people or everyone.”

Team Wonder is having trouble lighting their tree. Even Zatanna can’t seem to cast a spell. Diana has faith and uses her lasso and her strength to power the tree.

Team Wisdom is trying to figure out how to depower a tree. Cyborg can’t seem to crack it, but Harley’s crazy randomness gives him an idea on how to combat it using his mother box. He absorbs much data and needs the other two trees powered up fast.

Team Mystery is trying to figure out what to do with the planets they found. Starfire sees that they have Tamaran and begs them to release her home. They agree to release them, but in the meantime, they need to evacuate the planet and fight off the Titan to give the planet enough time to do so. Starro evolves and jumps into the Titans face. Sinestro and Starfire release the planets and Starro is ripped in half as Colu explodes.

Oliver neutralizes Waller and calls for help from the Green Lantern Corps. However, it’s too late. The four trees sprout on Earth. And that means that the Titans are already here… and Earth is as good as dead.

Analysis: Scott Snyder, James Tynion IV, and Joshua Williamson continue with the same format as before. This series continues to drag along. It lacks substance to make the stakes feel important. I should be on the edge of my seat as we reach the climax of the story, but instead, I’m just ready for it to end. The characterization of Vril annoyed me. He felt so intimidating at the end of last issue. He seemed pretty cool. And immediately, he’s turned into a whiny, obnoxious being. Batman willing to kill him was weird. Then you have Oliver constantly flip-flopping for and against Amanda Waller from page to page.

Riley Rossmo and Marcus To fill in on art this issue. Remember last week when I didn’t like getting less of Francis Manapul? How about getting none of him? I like Riley Rossmo, but I like him more on indie books. His superhero stuff feels weird, and having him fill in for a few pages in the middle of a story just isn’t a good call. I feel like To’s art here is better than the last issue, but switching back and forth between him and Rossmo is extremely jarring.

Hi-Fi’s colors were much improved here. I felt like he balanced out the page more. Each scene had its own tone and the colors didn’t hit you from all over the place. He filters the page with a key color and that helped a ton. Solid work here. AndWorld Design letters, and does some fine work. His font was excellent and his placement was on point.

Final Thoughts: I’m not feeling this book, you guys. I’m ready for it to be over… Thankfully we get the end next week.