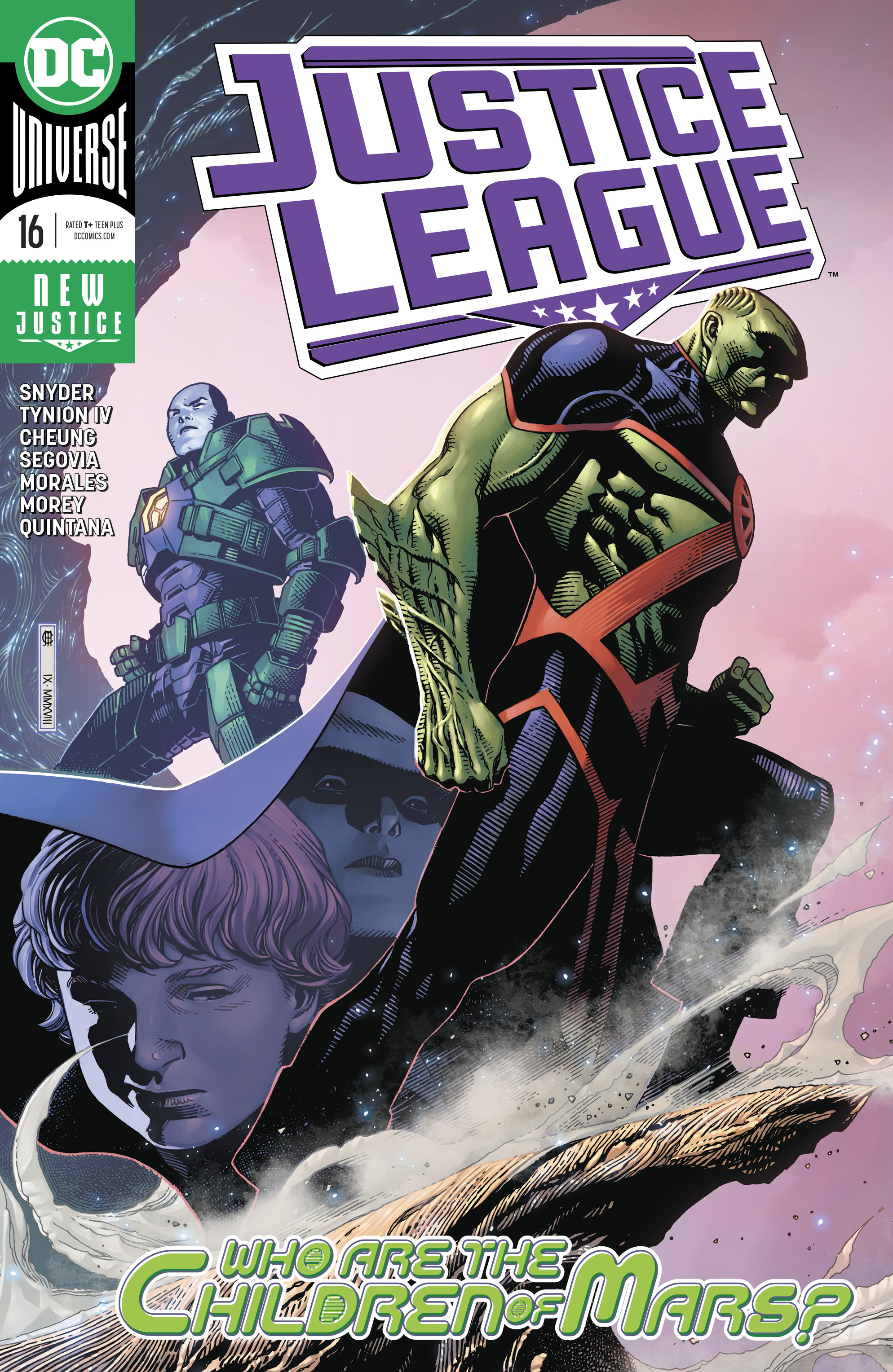 Synopsis (spoilers ahead): We open with a younger group of Guardians of the Universe who have discovered ancient tablets of Perpetua and of the universe that existed before. She fell long ago, but if the meaning of her symbol could be unlocked, she would rise again.

The Hawk people all fight each other, the Green Lantern Corps are about to throw down with John, and the Keep drops an info bomb onto J’onn… Perpetua had a great army made up from the DNA of humans and Martians. When the universe was made right, and Perpetua was locked away, the species were split apart – humans had the fire Perpetua gave them but had a weak body and mind, while the Martians had the power, but feared the fire of passion. And remember that weird species found in Luthor’s underwater lair? That was scientists attempt to recreate Perpetua’s army. They got the Martian DNA from J’onn when he was a child. He’s been marked by Perpetua.

Meanwhile, Shayera is willing to do whatever it takes to keep Thanagar’s secrets…well, secret. Including sealing off the vault with Kendra inside. After some explaining from John, the Corps sides with him and the Justice League. They call for Shayera’s arrest. She sends her guards to attack them.

The Martian Keep passes on the knowledge she had on to J’onn and she dies. Shayera rushes in and puts on the Absorbacon, trying to maintain Thanagar’s status as a power, but she is not strong enough to wield its power. She apologizes and removes the helm. All the guards turn to ash, Thanos style, and everyone is locked inside the vault.

Starman, along with the Trinity, appear. He could hear them across the universe. He explains that Perpetua didn’t want Shayera and Kendra whole again. She was afraid of what she could do. He removes that part from Shayera and places it back inside Kendra, making both women whole again, but Shayera is now her own soul. Starman tells her she has a second chance. She should lead her people, in truth this time. Shayera tells Kendra what the map was to on her wings – a godlike dimension. Starman looks to Kendra. Let’s go fix the universe. Let’s fix the Source Wall.

Analysis: Scott Snyder and James Tynion IV do an excellent job of storytelling here. This particular issue was a lot to take in. I picked up on a lot more things my second time through and Wikipedia was my tour guide. I’m not a DC Comics historian. I don’t have this expansive knowledge of the lore, so I’m not as quick to pick up on all the details and there is definitely a lot here. Some would call this an “info dump” and I don’t think I could argue against them on that. However, with where we are at in the overall story, I do believe many answers were needed and this issue delivered that. We also get several nice character moments throughout this story – particularly with Martian Manhunter, which was nice.

Jim Cheung, Mark Morales, and Tomeu Morey’s art is just absolutely stunning. I wish I could have gotten more from them than a handful of pages each issue. I’m not sure why these guys couldn’t have done the entire book – it had been a while since they’ve done an issue. Hopefully, things get right and I can see more of these guys very soon. Stephen Segovia and Wil Quintana’s art doesn’t strike me in the same way that the former team’s art does, however, I do think they did a much better job here. Segovia’s backgrounds are existent and his attention to detail is better spread out evenly throughout the issue. Tom Napolitano does an excellent job with his font and placement. I liked how he did his sound effects as well. They looked very good.

Final Thoughts: With things starting to come together, the series continues to gain momentum. I look forward to more answers being revealed in the future. As a single issue, though, it’s a bit hard to take in with all the information here.