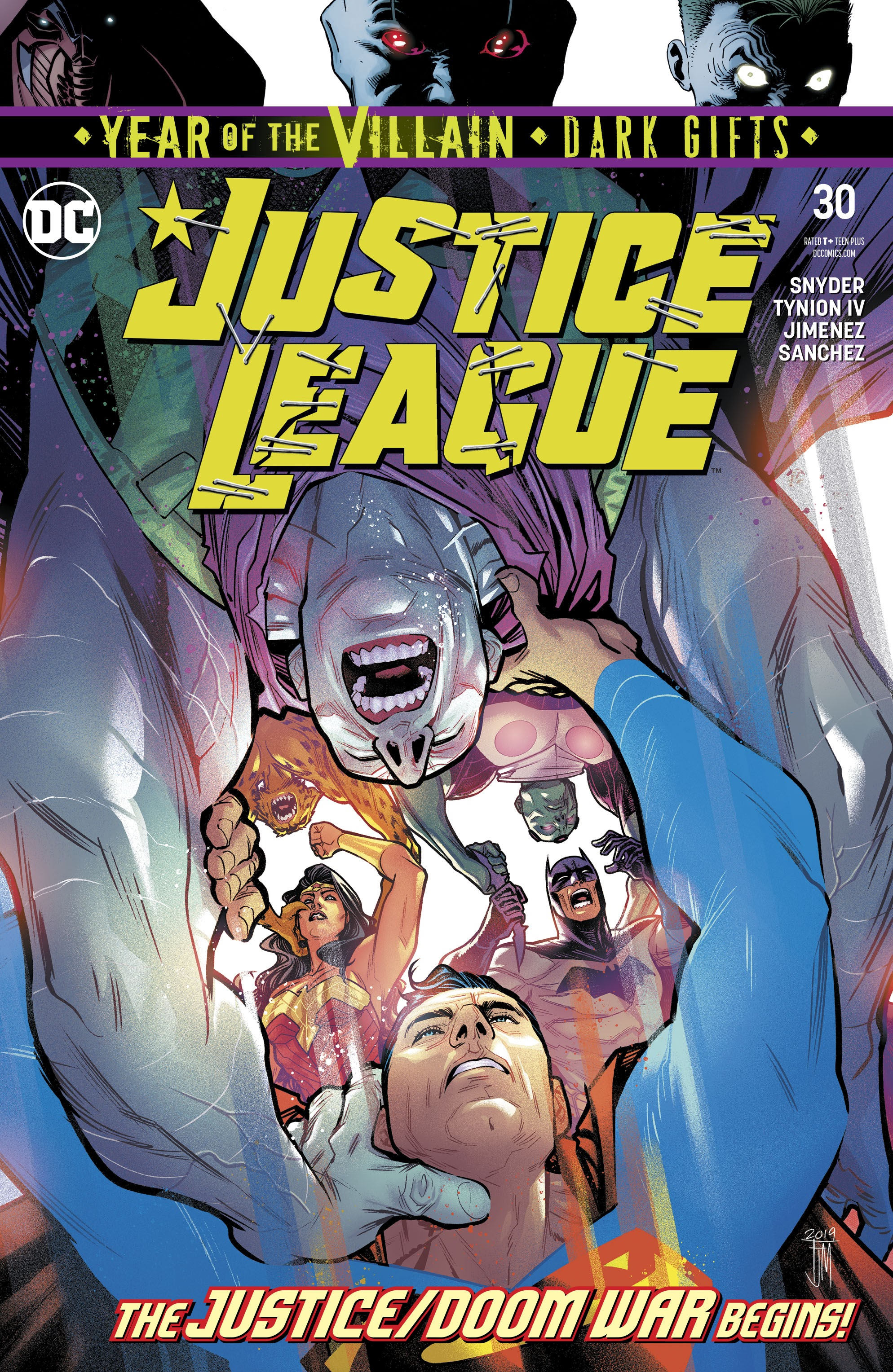 Overview: In their efforts to thwart doom, the Justice League expands its reach to both the past AND the future!  What could go wrong?

Synopsis (spoilers ahead): We begin the issue with a preview of what will happen in three days if Luther wins this Justice/Doom War, as told by Starman, who took a peek thru Hypertime and saw this imminent future. Let’s just say it’s not a good future. Lots of fire, death, and destruction. As Batman, Wonder Woman, and Superman explain how great these stakes are, we finally see what I’ve been waiting to see for literally months. Not every DC hero, but a whole lot of them have gathered at the Hall of Justice to help fight this war. We then get a very lengthy explanation from Starman about the six different forces and their opposites, the Seven Hidden Energies of Creation. He then says that Lex is seeking the seventh force and that while Lex has a piece of the Totality left to him by his father, that Starman has a fragment of the Totality too. A cosmic rod. He can use the rod to sense other fragments of the Totality, and he’s found pieces in both the past and the future.

The basic plan is for the core Justice League team to split. Two going to the past, three going to the future to attempt to retrieve the fragments. World Forger and Monitor would then take the newly formed Totality and defeat Perpetua. All the gathered remaining heroes will remain to defend the Hall of Justice and the portals that Starman will open from Lex and everyone he’ll bring with him.

We then see a mysterious cloaked figure overhearing a conversation between Kendra and Superman, as Superman worries about Kendra and how she’s dealing with J’onn’s death.

We then see the Hall of Doom as Lex and Perpetua have a brief discussion as Lex introduces her to the “new” Legion of Doom. We then see a fabulous full page of many assembled villains who have accepted Lex’s “offer”. Perpetua points out that while Lex is extremely powerful, he is still vulnerable and that the symbol of “doom” represents the seven dark forces. Brainiac says that he has been listening to the League through their Jarro fragment and that they have a plan.

Back at the Hall of Justice, the portals are ready. Batman, Superman, and Wonder Woman head to the future as Flash and John Stewart go to the past.

Starman sends Mera and Kendra with Monitor and World Forger to find the Anti-Monitor while Starman will stay and guard the portals. As soon as the two groups go through the portals there’s trouble as there is no radio contact. The mysterious cloaked figure attacks Mera and manages to jump through the portal. Starman realizes that someone has tampered with time before they set their plan in motion and that the connection to the future and past has been broken.

Both groups of Justice League members have a rough landing and immediately know something is wrong as the Doom symbol is prominent everywhere. Our groups are both confronted in equally shocking fashion. The future group is greeted by Kamandi, the last boy on Earth, who says they’re two weeks late to save their future. And the group in the past is greeted by the Justice Society of America saying they’re two weeks late to save their past!

Analysis: This is a huge issue with a lot going on!  Lots of really great stuff. But also a few things that I don’t quite understand.

I’m thrilled that we finally get to see “most” of the heroes and villains that have gathered for this war.

However, I’m confused about the whereabouts of Aquaman and Hal Jordan. It really makes no sense that these heroes aren’t involved. Also, I find it hard to believe that with all these heroes gathered and their task is to protect the Hall of Justice, that this mysterious cloaked figure so easily attacked Mera and was able to jump through the portal. It was much too easy with all the assembled heroes already there. I counted at least thirty heroes in the Hall of Justice beside the main team, and to let this one figure attack Mera and get thru the portal so easily is kind of a big problem.  I don’t buy the “it’s comics” justification for the heroes allowing this to happen.

I also think the musical analogies could have been done a bit better. I understand what they were attempting to do, but I would have done it this way. Major chords have nice pleasant, pleasing sounds. Minor chords are darker in nature and can sound less pleasant and even distressing or ominous. The best example I can come up with is the Imperial March from Star Wars. It sounds dark and menacing partly because it was written in G minor. Do a quick search of Imperial March in a “major” key and it sounds completely different. Snyder and Tynion’s musical analogies would have worked much better if they used the “major” key analogies for the heroes and the “minor” key analogies for the villains. Happy, pleasant sounds for good. Dark, ominous, dissonant sounds for bad. I was so excited to see musical analogies, but they were just a bit off to me.

I love Snyder’s ambition and reintroducing Kamandi and the JSA will certainly please a lot of long-time fans. I’m very curious about what role they’ll play in this story as it continues to unfold.

The art continues to be top-notch in this series. Jimenez is a favorite of mine. Lex and Perpetua look a bit stretched out to me, but that’s just my take on it.

Final Thoughts: A very ambitious issue.  I appreciated how big this series is and the chances it’s taking, but this particular issue suffers from flaws in my opinion.