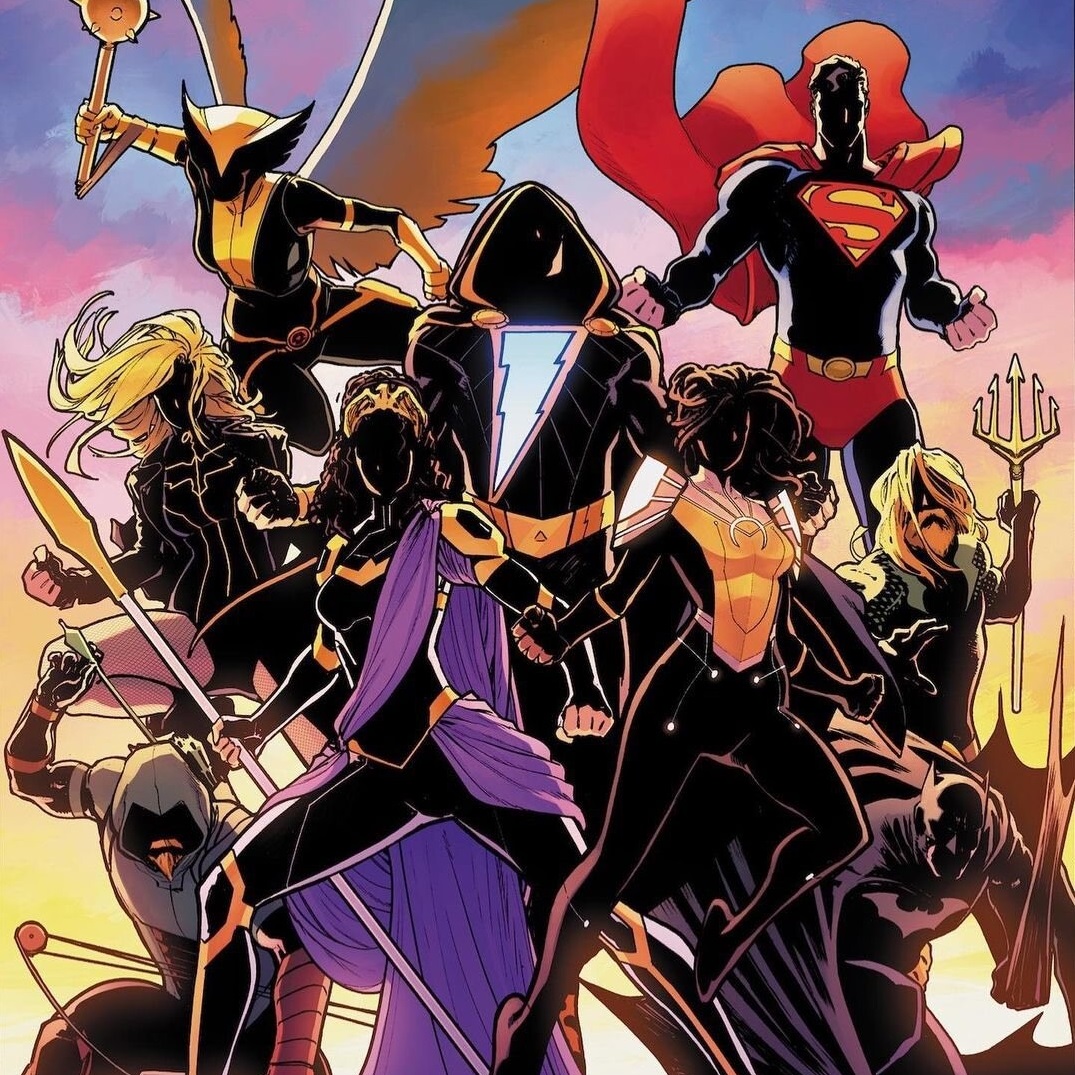 Overview: In Justice League #59, a new threat rallies the Justice League together with the likes of Black Adam and Naomi, with a backup story bringing on an adventure with Constantine, Zatanna, Merlin, and the end of the world!

Synopsis: Justice League #59 begins with an off-panel discussion between Oliver Queen (Green Arrow) and Dinah Lance (Black Canary) in which Ollie ruminates that the Justice League has been placed on so high a pedestal that the people they protect can’t relate to them and that this is a problem which keeps the League from being more of a benefit to the world they watch over.

To capitalize on that idea, we are then taken to Kahndaq, where a boy silently mourns his mother in front of her grave. He finds he is not alone, however, as Black Adam appears over him. The ruler of Kahndaq also mourns, but over his beloved. The seed of a bond is formed through their losses, but before they go any deeper, they are interrupted by an alien presence: a horned monstrosity that calls himself Brutus who seemingly has come to earth in search of a challenge to his might. A battle ensues between the two in the skies above the country, and soon the newcomer gains an advantage over Black Adam. But just as the ruler of Kahndaq is ready to unleash the power of Shazam, the fight is interrupted by the Justice League, specifically Superman, Batman, Hawkgirl, and Aquaman. Aquaman brings the fight into his own territory as he surrounds Brutus with the sea and attempts to subdue him with his trident and a lack of oxygen. The villain, however, turns the tide with an explosive attack that knocks Atlantis’ ex-king further into the depths.

Just as the bull-headed alien breaks the surface, however, Hawkgirl knocks him back with an assist from her Nth metal mace, which breaks off one of his horns, but the attack has also caused the weapon to react to Brutus, and seemingly begins to siphon off energy from his body.

Brutus, realizing he is not yet up to defeating Earth’s mighty heroes, opens a rift into another dimension and, despite the League’s efforts to stop him, disappears beyond their reach. The current problem solved, Black Adam removes himself from the League’s concerns, and the rest return to the Hall of Justice to study their findings on the newcomer, as well as the effects it had on Hawkgirl’s mace. After a return to the conversation between Ollie and Dinah at the beginning of the issue, which now spills over with input from Superman, and the desire for some fresh candidates for the Justice League, Kelex the Kryptonian A.I. has found a possible lead on a match with Brutus. This lead concerns Naomi McDuffie, a recently discovered superhero that the Justice League had met in the pages of Young Justice and Action Comics.

We then find ourselves with Naomi, who is showing off her powers to a few of her friends. Black Adam appears before her, wanting to talk about beating the Justice League to her.

Analysis: Justice League #59 is clearly Brian Michael Bendis, whom we can detect through the dialogue between the characters. While the voice itself isn’t bad and is reminiscent of his run on Young Justice, it does pull me out of the story a little bit. The tone is different than previous iterations of the books I’m familiar with. There’s a certain slant of comedy and energy that seems to be uniquely his own. While I enjoyed Young Justice, I felt that this voice was perhaps too safely consistent throughout his run, and while consistency is great to rely on, it seemed to dampen moments that were meant to hit harder on a deeper level and fell a little short of the intended mark.

On the other hand, there is a different handling of the story on his Naomi run. I felt he knew how to handle the discovery of Naomi’s powers and origins in an organic way that spoke of the promise of the progression that Young Justice seemed to lack by the end of its run. I hope that the creative team here can find a way to marry the more-lighthearted storytelling with the interpersonal relationship-building and individual growth that we have come to appreciate in other books that have made an impact on the comics industry.

Black Adam is easily the most interesting character of the book. When Brutus interrupts the relatable moment between Adam and the motherless boy, the former says, “Child, leave this place. I will protect your mother.” I find that to be a beautiful line, which illustrates the genuine care that Black Adam has over not just his country, but its citizens. He is protecting even the deceased as a sacred part of his community. This suggests that she is not just a pile of bones that fails to live, but rather continues to be a person of influence for the potential greater good of the nation.

Adam also foregoes much of the small talk that Brutus (and later, the League) baits him with. He generally doesn’t seem to waste his words on quips or obvious answers. He wants only to eliminate the threat as quickly as possible and to allow his people to live their lives in his peace.

Brutus is somehow tied to Naomi, an important Bendis creation who had her own book and who has already appeared in the pages of Young Justice and Action Comics. Her origin is still not fully explained, but we do know she is not originally from this dimension, and this twist promises to deliver more answers to her role in ours.

Synopsis: The second story in Justice League #59 begins at the Augustus Priory Ruins in Wales, as a mysterious figure casts magic on the crumbled doorway of the priory and enters the building into a time and place where the priory is as it used to be. Deliberately, he walks the halls, ridding them of the demons he had placed there very long ago, eventually ending up far below to a lake, entombing a sword in a stone. This is all guarded by a young knight, who sheds tears of joy and relief as she recognizes the man as her lord Merlin the Magician.

Elsewhere, in New Mexico, while hitching a ride, John Constantine explains to Zatanna what they’re up to; investigating a coincidence concerning a possible upcoming holy war in nearby Magdalena that was foretold by a seventh-century priest and a 1990’s musician. This coincidence seems to hold some merit when they discover that upon arriving at their destination, they come upon a battle between two cult groups, one witnessing the arrival of the gift from heaven and the other, the weapon from hell. Constantine manages to stop time, temporarily quieting the chaos, and see that the two ‘gifts’ have merged into… Jason Blood, who cryptically explains that he’s been sent on a task and with the message that ‘something beyond knowing has returned’, which we take to be Merlin, because we are brought back to the lake under the priory, where the magician murders the knight, relieving her of her duties, pulls the sword from the stone and destroys it, leaving nothing but its jewel, and exits, promising to bring the world to its destiny, whether it likes it or not.

Analysis: The backup story for Justice League #59 has Ram V bringing a far different tone from Justice League Dark. There is nearly no humor, but the pacing and content are far more provocative. In just a few panels we understand the unsteady but genuine relationship that Constantine and Zatanna have, and the dialogue and imagery they share that culminate into a small scene of their fingers touching lightly, which encapsulates the moment perfectly. With the young knight, I was able to feel the unending and lonely duty she had to abide by that was only fully realized the moment she recognized her master. Her death, though a betrayal, felt like a relief all the same. I thought the idea of John stopping time by literally breaking his watch was a nice bit of levity, too.

I really enjoyed the contrast between the two stories in this issue. I felt that the main tale didn't have enough of a diversity of voices, but it's exciting to see what complexity Black Adam will bring to the team. I also like the idea of making the heroes relatable, not just to us readers, but to the fictional citizens of the DCU touched by the Justice League. The effects on the lives of their charges can be far more satisfying than punching bad guys through mountains, and I hope this can be followed through with meaningful development. The final story was a strong first chapter to a Justice League Dark story that I hadn't realized that I wanted.