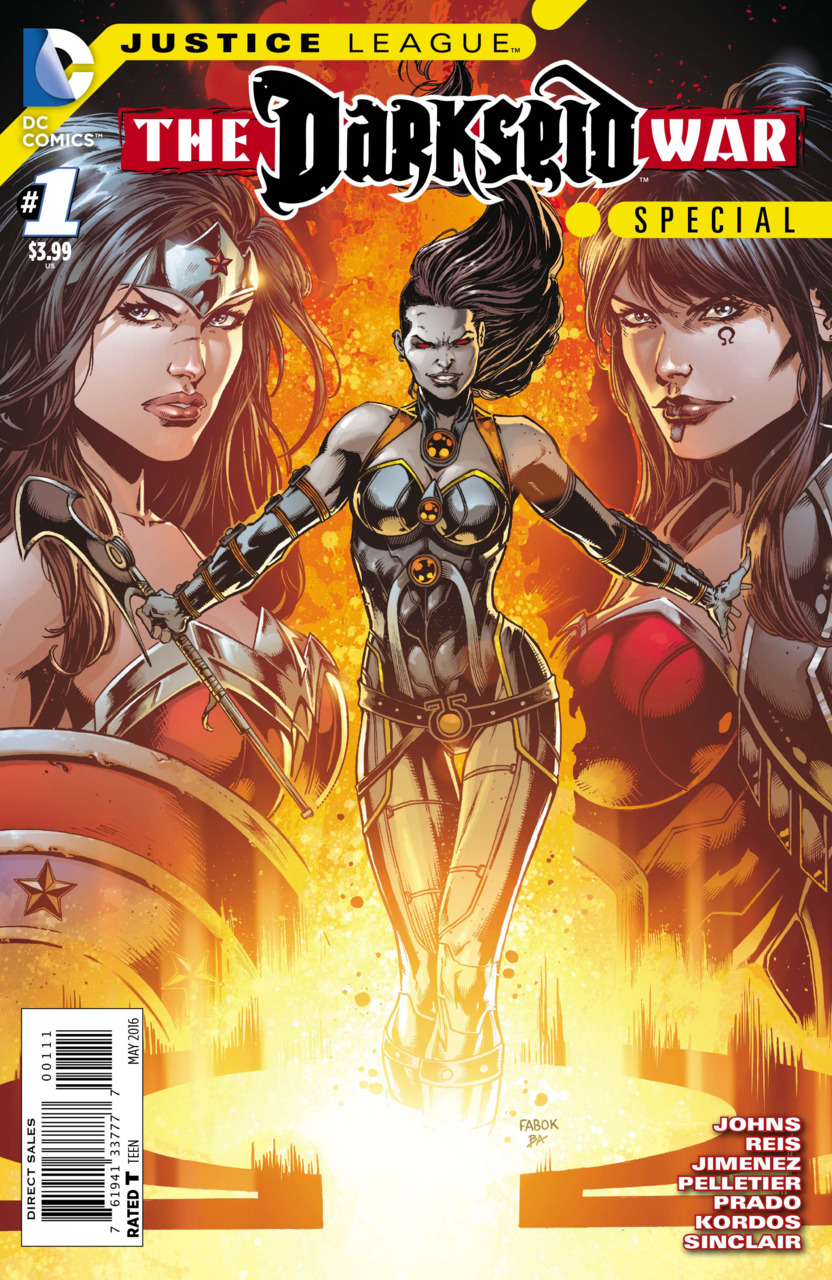 Synopsis: While the battle between the Justice League and the shadow demons rages on in Gotham, we see inside the ring of Volthoom and the captured soul of Jessica Cruz. A voice tells Jessica that she has the power to escape.

She is quickly told by the trapped soul of Harold Jordan, the deceased Power Ring of the Crime Syndicate, that the voice is a liar and she is stuck with them. He explains in a terrified voice that if she were to escape, then Volthoom would return to the ring and continue torturing all the former Power Rings’ souls within. The voice challenges Jessica to find the ring’s central battery. Gritting her teeth, she begins to run away from the trapped souls in search of the battery.

At an unknown location, the Amazonian assassin Myrina explains her thoughts regarding her daughter. She admits that Grail may be the daughter of Darkseid, but she has helped her control the darkness within her. She comes upon Grail praying before the glowing orb known as the Anti-Life Equation. Grail begins to retell her story. Though Myrina has tried over the centuries to control Grail, Grail’s story illustrates just how strong her father’s influence is on her. She constantly kills throughout history despite Myrina’s efforts to help mankind from the shadows.

Grail returns to the present and retells of her introduction to the power of the Anti-Monitor after using a witch’s “all seeing eye”. Myrina tries to remind her daughter that revenge is not the Amazonian way to which Grail counters with confidence that they are better than the Amazons. She then reveals a kidnapped Steve Trevor and that he will be the key to her plan.

Back inside the ring of Volthoom, Jessica fights off a horde of deceased Power Rings who tell her to simply give in to the fear. She refuses and makes the final climb to the central battery.

Returning underground, Steve Trevor is kissed by Grail and seemingly infused with the Anti-Life Equation. The issue ends with Jessica reaching the ring’s battery only to find Cyborg (in human form) waiting for her and revealed to be the one who has been helping her.

Thoughts: With Fabok still out and presumably finishing up the next few issues, this special issue helped to fill in some of the gaps of certain side characters of Darkseid War which I appreciated. The story developing within Volthoom’s ring seemed to be trying to highlight Jessica Cruz so as to make her bigger role following Rebirth more entertaining. She is a newer character and certainly has an interesting power set given her use of a ring powered by an evil and sadistic Green Lantern doppelganger. Although terrifying to think about, I really enjoyed the exploration into the “hell” to which all other Power Rings found themselves after being disposed of by Volthoom. It adds another layer of tension to Cruz’s arc and whether or not she can overcome her almost paralyzing fear.

With Grail’s backstory, Johns continues to nail the Amazonian blood lines. Wonder Woman has been such a great character and focal point for this arc so to make Grail/Myrina the focus here added a lot more depth to the characters. The spotlight on them has been long coming and this issue helped to tease their importance in the final two issues of this arc.

Even without Fabok, the art by Ivan Reis is done really well in this issue. The creepy and haunting images of inside Volthoom’s ring made you even feel sorry for the villain Harold Jordan. Reis also captured the emotional roller coaster that is the relationship between Grail and her mother, Myrina. Seeing a mother fight to protect her child only to see that the evil inside her may come to destroy them both was perfectly delivered in this modern/superhero Greek tragedy.

Overall, I really liked this special issue, despite it basically being a tie-in. An essential tie-in to the overall story, but it really was just back story and side character development amidst Darkseid War. It really seemed like this could have stood on its own as a main chapter of Darkseid War but the creative team had only so many issues for this story and Grail’s schemes involving the Anti-Life Equation had to be given more attention. In the end, this issue was the perfect way to satisfy the readers until issue #49.