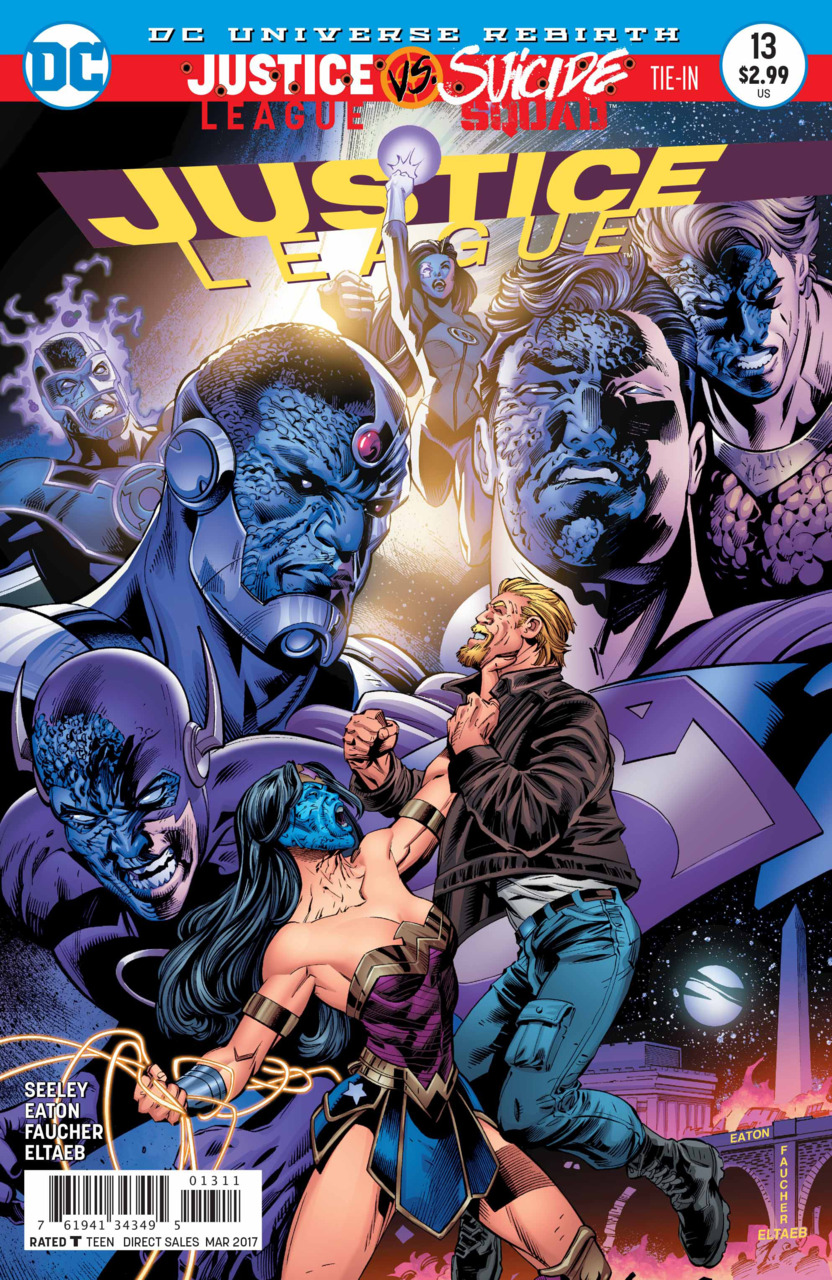 This is another Justice League vs Suicide Squad tie-in. The story opens with Steve Trevor leaving work for the day in Washington DC, talking about having plans with his niece and nephew.  The building starts to shake as a possessed Superman attacks the White House.  The story then gives a brief snapshot of members of the Justice League wreaking havoc around the globe.  Trevor then is attacked by a coworker who is suddenly possessed by the same force as the Justice League.  Trevor fights her off and is then on the run from a hoard of possessed people.  Trevor makes his way through Washington which is in ruins, trying to make his way to his family to make sure they are alright.  He runs into Wonder Woman briefly who is possessed by the same demonic force.  Trevor makes his way to his niece and nephew to find them possessed and torturing their mother. Trevor shuts his eyes at the sight of this to find Eclipso in his head speaking to him.  Trevor opens his eyes and sees the world and his family back to normal. This is revealed to be an illusion as Trevor becomes possessed by Eclipso and the Earth is shown falling into darkness as the issue ends.

This tie-in issue, by writer Tim Seeley and penciler Scot Eaton is a marked improvement from the last issue, which was also written by Seeley.  The story takes the form of a man on the street perspective as the world falls under Eclipso’s control. Given Trevor’s established history with the Justice League, following Trevor through this issue feels appropriate.  The story clips along quickly and is more or less a single chase sequence with Trevor trying to make his way to his niece and nephew.  Seeley does a good job of ratcheting up the tension throughout the issue and the reveal of Trevor’s niece and nephew torturing their mother is well done, with both the writing and art capturing how horrifying a discovery that would be for someone to walk in on.

I’ve never been terribly keen on tie-in issues for a big event. Most of the time they add nothing to the main story and serve as nothing more than an interruption or in some cases utterly derail whatever story the regular creative team is doing.  Seeley does a good job of building on the threat established in the main books and the story takes advantage of being to spend time in the world to show exactly how bad it is that Eclipso has taken over.

The story works fairly well despite not really being able to use the Justice League with the exception of the brief Wonder Woman cameo. It is entirely appropriate for Trevor to have a moment with Diana in the story but having her fly by and make a threatening comment from a distance is fairly useless and doesn’t work well as the way it’s presented. Plus, it’s doubtful that Trevor would even have been able to hear her.  If they had Wonder Woman even chase Trevor for a few panels, I would have no issue with her appearance here. But as it stands, Wonder Woman feels rushed and crammed into a scene that Seeley didn’t have the space for and it would have been better to not show her at all, then to shoehorn her into a quick cameo.

Eaton does a good job with what what he’s given to work with.  I don’t think Scot Eaton will ever be one of DC’s top tier artists, but he gets the job done and has shown himself to be a solid fill-in artist.

All told this issue side steps the trap of howl terrible most tie-ins are and adds nicely to the Justice League vs Suicide Squad story and it’s worth your time.