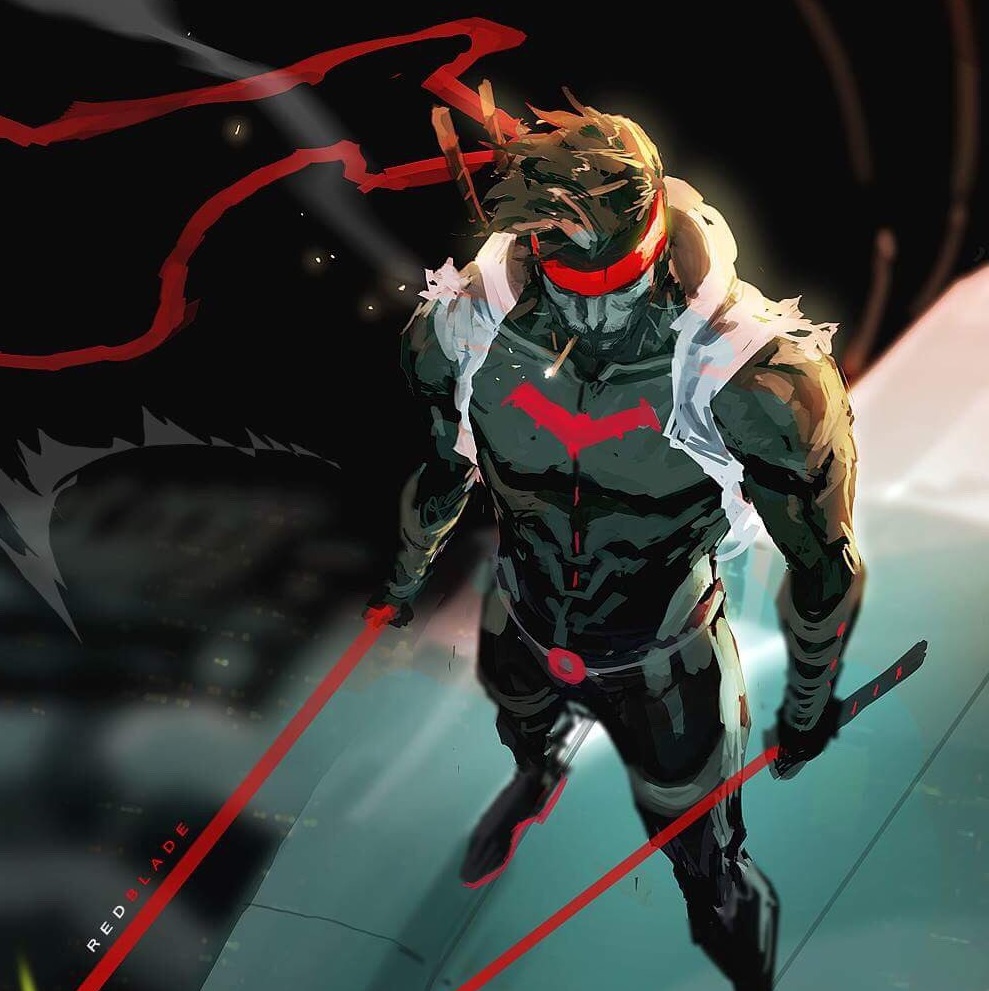 April Fools pranks were all banned from the Batcave this weekend under the threat of staying out of the Easter Egg hunt. This weekend was a feast for Calendar Man and the Holiday killer with those two coinciding, but that’s no excuse for us to not deliver our weekly report of all things Batman. With some bits and pieces of news here and there, the biggest and most handsomely egg we could find was the announcement of Frank Miller’s new project, a young adult Carrie Kelley title. This might as well be a fabergé egg for what it’s worth since it will have Miller dealing with a tone that he rarely works with. Joining Miller on this unusual quest will be artist Ben Caldwell, whose style is the best fit possible for what the book promises to be. TONY DANIEL is now praying for a little bit more time. The artist has been following a very tight schedule with his Batman issues, having just wrapped up the inking for issue #46, due to come out in just one month. Taking from this page he’s shared, all the deadline madness that goes behind the scenes will probably be worth the praying.

James Tynion is having the time of his life resurrecting his favorite 90’s villain, Ulysses Armstrong, for his last few issues of Detective Comics. His word of advice is “I really recommend becoming a comic book writer and resurrecting your favorite obscure 90s villain and sending him after your heroes. It is rad as heck.”

While the new creative team does not take over until May, Nightwing will be getting two one-shots by different teams. Coming next week will be the issue written by Collin Kelly and Jackson Lanzing, drawn by Jorge Corona and colored by Mat Lopes. About the story itself, LANZING commented that “NIGHTWING #42 is a story about the lengths we all go to for our family – but it’s also a formal experiment, written and drawn in the structure of a kabuki play. @jecorona [Jorge Corona] is one of the most interesting artists working – his work here is stunning.”

Kabuki is one of the traditional forms of Japanese theater. In a Kabuki play the actors (traditionally only men), wearing elaborate and dramatic costumes and make-up, will perform with music and dance to plots which are laid following the structure of the jo-ha-kyü, roughly meaning “introduction, scattering, rushing”. The three-part structure has that the beginning should be slow, the development should catch up in speed, and the ending should be fast. In Kabuki, the structure is usually split into five acts, three of them belonging to the ha portion of jo-ha-kyü. Me, I am deeply curious to see what Lanzing and Kelly have cooked up with this concept. DEXTER SOY is progressing with his Japanese-inspired Red Hood theme and has now evolved him to The Red Blade.

Sam Humphries is doing a quadruple summersault from an acrobat to a gymnast, and he promises this time he’ll be staying for more than six issues. As reported last week, after issue #45 Humphries and John Timms will be taking over Harley Quinn. And she’ll be going off to Apokolips. And joining the Female Furies. I wonder if her mallet will be enhanced as well. Spoiler alert! Joker and Harley have rushed with their plans and beat Batman and Catwoman to the altar, coming in the pages of White Knight.

What kind of ending would you like Dark Prince Charming to have? This was the question Marini asked this past week as he worked on his last Batman page, as long as they were not requests to kill Robin, since, Marini says, “He’s not in my story… yet.”

Readers, they want a “dramatic romantic brutal bloody funny happy Ending”, but Marini confessed, under the risk of losing a few readers, that he actually wrote a comedic musical where Batman will be singing and dancing. I’d be willing to buy 10 copies of that, but only if it there was a specially recorded score to go along with it. He might be saying goodbye to Gotham soon but Marini will probably be keeping one of the Gotham characters close to his heart for a long while. No, not the Bat. The Cat. His most recent Catwoman pieces include cat-lingerie-wearing Selina, tail and all, and Catwoman on a motorcycle. Marini also shared some of his concept art for the Joker and the ever so classic Batman meets Gordon on the rooftop of GCPD.

It is now close to three years since vol. 2 of Batman: Earth One came out, and updates have been far and rare. With the team now working on Doomsday Clock, the release date of the graphic novel became even more uncertain. Despite the uncertainty, according to Gary Frank two-thirds of the story are already done, but it has been put on halt until Doomsday Clock comes to an end.

This past week was time to say goodbye to Dark Nights: Metal and all of its utter and absolute over-the-top insanity. It’s been a fun ride that shall be remembered as the biggest Bat-moshpit to ever be. Banging his head with us this week is a 3D artist and sculptor Amir Anbarestani, KING’S LETTER.

Back at the beginning of Metal, a number of pieces of art inspired by Capullo’s designs for the Dark Knights started popping up here and there and among them came the art clash project between King’s Letter and Bosslogic. Amir would sculpt the characters which then Bosslogic would render, and the results are widely impressive. They worked together on the Drowned, the Merciless, the Batman Who Laughs, the Dawnbreaker and the Red Death. But then it gets interesting. Amir decided to push the project further and develop fully sculpted, collectible versions of all of the Knights. “We began working on the Red Death first and it was our goal to just make a 2D piece for all of the Dark Knights, but as I was working on the rest I thought to myself: why not sculpt these as if they were going to collectible statues?”, he says.

And so he did. The Dawnbreaker, the Merciless and the Drowned all got collectible treatment. Swiping through those links one can see the incredible level of detail Amir has worked on those statues. It is not Amir’s attention to detail that made his designs stand out to me. It was the base of the sculptures: the shiny, see-through, edgeless spiral of the Dawnbreaker’s construct; the rock with the fallen cape and lasso of the Merciless; the Kraken and dead bodies rising out of water for the Drowned. They all give context to those figures. And I honestly would love to see them come to life with real-world materials.

About your work. It hasn’t been long since you switched from clay sculpting to digital modeling, from what I could gather from your Instagram feed. What would you say are the pros and cons of digital sculpting?

I think it’s been about a year that I have made the switch to Digital from Traditional. The main reason was so that I can get more jobs from bigger companies located outside of Australia since the shipping costs can be quite high and there was no guarantee that a master copy (the original clay statue) would reach its destination safely. In term of pros I’d say it’s much faster and convenient to work digitally, and for the cons the only thing I can think of is that I don’t get the satisfaction of pushing clay around.

Regard the Dark Knights, is there any chance you’ll have those collectible models printed? Assuming, of course, you work with 3D printers to bring the digital sculptures to life.

I can’t say for sure that they would be printed any time soon, as I have leveled up quite a bit since working on the Dark Knights. But I’d definitely love to revisit the models and hopefully see into maybe producing them one day.

Did you only develop collectible versions for the Drowned, the Merciless and the Dawnbreaker or did you just not share the other ones? Also, why were those three the chosen ones?

We began working on the Red Death first and it was our goal to just make a 2D piece for all of the Dark Knights, but as I was working on the rest I thought to myself: why not sculpt these as if they were going to be collectible statues? Also the reason we stopped after The Drowned was simply cause we – Bosslogic and I – got busy with work, but we are definitely planning to go back and finish up the rest of the Knights.

How did the idea for the collab with Bosslogic come about? Are the both of you following the series, or did one hype the other up about it?

The initial inspiration sparked when Bosslogic and I saw “The Batman Who Laughs.” We started researching him and we found out about the rest of the Dark Knights which led to us wanting to create pieces based around them, with my favorite being “The Drowned”!