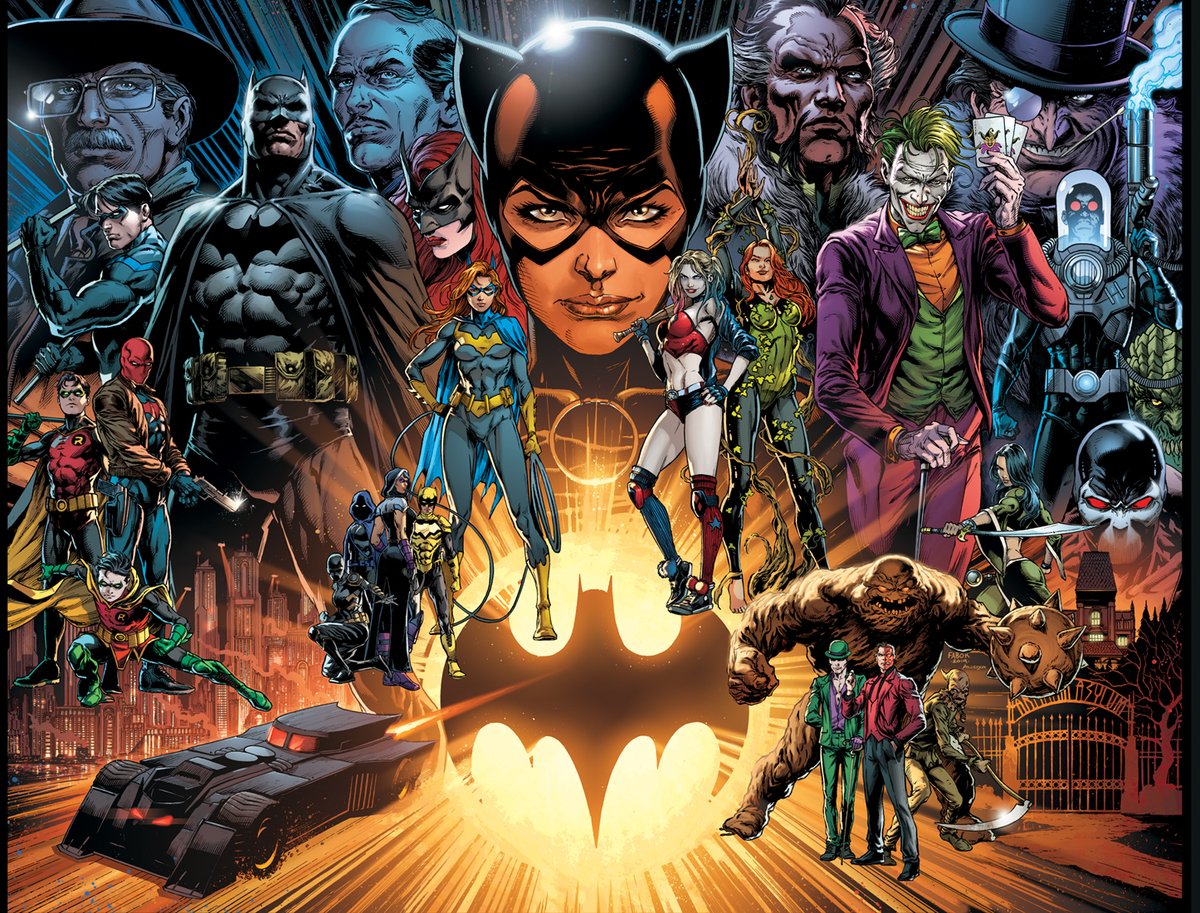 Hello, my love bats. After a week where I hope you all got to spend some time with your valentines, let’s get down to business and talk this week’s news and updates from Batman Universe comics. Before we get to the harsh side of life though let us appreciate some pretty valentine art by JORGE JIMÉNEZ who went back to his Batman #50 cover to wish everyone a good valentine day. And I still can’t wrap my head around how good this guy is with textures, so good that we can tell the difference between latex and leather. We had a week filled with shaky news and abrupt changes. Doomsday Clock getting delayed again is no surprise to anyone, but Batman: Damned supposedly being canceled sure did shake the world of DC Comis. It proved to be a misunderstanding, and we’re covering more on that later in this meeting.

Continuing on the limbo of project being pulled out, DC continues to hack their omnibuses and absolute editions. After the cancellation of the Hush omnibus, Batgirl of Burnside Omnibus and Absolute Dark Knight were also canceled, as reported by Bleeding Cool.

On a slightly brighter side, there will soon be a new Batman Black & White statue coming out. Sculpted by PAUL HARDING after a design by JOE MADUREIRA, this statue looks as good as one might expect from the high quality constantly delivered by the Black & White series. The Knightmares arc is currently on hold while the Batman/Flash crossover takes place, but Tom King never fails to give us a taste of what is to come. First, we get JORGE FORNÉS, whose issue will touch upon the Trinity. The pages shared by King show Superman, Wonder Woman and Batman facing a giant monster, something completely out of Batman’s depth. Yet, he jumps into it. Regardless of how this issue turns out to be, this one scene is beautiful on its own. And, for the last of the Knightmares, YANICK PAQUETTE will join King in breaking our hearts once more. The boat or the street, with “Some of These Days” playing in the background as confirmed by Paquette himself. You know, the song from Batman Annual #2, Date Nights Last Rites, that soul destroyer issue. Detective Comics #1000 is coming in the same year when Batman is also celebrating its 80th anniversary. As if the bombardment of amazing variant covers was not enough, DC commissioned artist JASON FABOK and colorist BRAD ANDERSON to develop a wraparound showcasing the entire Batman Universe in 2019. The art will also be the program cover for C2E2 – and it should probably be made into a poster, just saying. The stream of variant covers has slowed a bit but the ones that got revealed this past week were by two of the masters: Jim Lee and Neal Adams. To be sold exclusively by his own online store, NEAL ADAMS has developed three different limited covers, all of them with a price tag that might make most of us shiver. Still not in its final version, the Torpedo comics exclusive is penciled by JIM LEE and inked by SCOTT WILLIAMS. Lee is one of the few artists to have chosen to go for a dynamic scene instead of a pose for his cover and the result is frankly quite stunning. With most of the variant covers now revealed, interior art has begun to surface. It started with TONY DANIEL sharing a page colored by TOMEU MOREY of his story with TOM KING. In it, the entire Bat-Family is featured, a promising scenario considering the creative team involved in it. The story will also feature Joëlle Jones on art.

With the release date getting closer and closer, DC has now officially revealed the summary for the stories. While they’re all promising, the Bat-Family fan in me can’t help but feel elated and anxious to read James Tynion and Alvaro Martinez’s “The Precedent” and Tom King, Tony Daniel and Joëlle Jones’ “Batman’s Greatest Case”. While the full book doesn’t come out for over a month, we can quell our thirst with BRIAN BENDIS and ALEX MALEEV’s story, made fully available for free in an exclusive interview given by the creators to Entertainment Weekly. Alex Maleev’s art is a thing or dark beauty that fits Batman’s world perfectly well and will happily find its place with a new secret project the duo is working on. According to Bendis, this short story is “a GREAT taste of what Alex and I are cooking up for @DCComics next year (not detective).”

Taking the cue, Peter Tomasi also shared a rough from DOUG MAHNKE for their 12-page story. Another preview that came out this past week was DENNY O’NEIL, STEVE EPTING and ELIZABETH BREITWEISER’s “Return to Crime Alley”. Spinning out of Detective Comics #457 “There’s no Hope in Crime Alley,” O’Neil took this opportunity to explore the flaws and faults of the Dark Knight by using Leslie Thompkins as a pacifist and voice of reason. In the exclusive interview given to SyFy Wire, O’Neil said that “There was a hole in the Batman continuity, and it wasn’t imperative that it get plugged, but that’s where Leslie started. It was a chance to put into the continuity a dissenting voice. ‘No. Violence is not the answer to everything.” Ric continues to turn everyone’s head upside down. Editorial for Nightwing seems to be as messy as it can get and DC’s latest stunt was to reveal that Zack Kaplan would be joining the creative team as co-writer just one week short of his debut.

Kaplan hadn’t worked on any Big Two title before, his writing career been mostly focused on creator-owned projects such as Eclipse and Port of Earth, published by Image Comics. DC has not officially announced him as an ongoing writer for the title but Kaplan has added Nightwing to his Twitter bio, which might suggest that he’ll be joining the team for longer than one issue alone.

The regular Catwoman creative team will be taking a break in March and RAM V and JOHN TIMMS will be stepping in to fill the gap with a one-shot. Fill in one-shots are usually hit or miss but this one promises to be K.O. type of hit if the promise from this beautiful silhouette-only 6-panel action scene by John Timms pays out. The issue will also feature one of the fiercest variant covers by ARTGERM until now. The final issue of Batman: Damned has been postponed. Again. Initially set to release on March 13, then March 27, DC has now canceled the initial solicitation altogether and, according to Newsarama, plans on rescheduling the issue for a May release. Initial rumors were that the title had been canceled altogether and BRIAN AZZARELLO went on Twitter to comment on the issue, saying that “BATMAN: DAMNED 3 is not canceled. We’re working at the schedule we’ve always had. We have nothing to do with when DC solicits. When this is all done, Lee & I will have plenty to talk about. That time isn’t now.” So… this one delay might be due to some internal mess-up, but who are we to guess. Either way, it is worth sharing LEE BERMEJO’s latest sneak peek of Constantine and Swamp Thing engaged in some small talk.