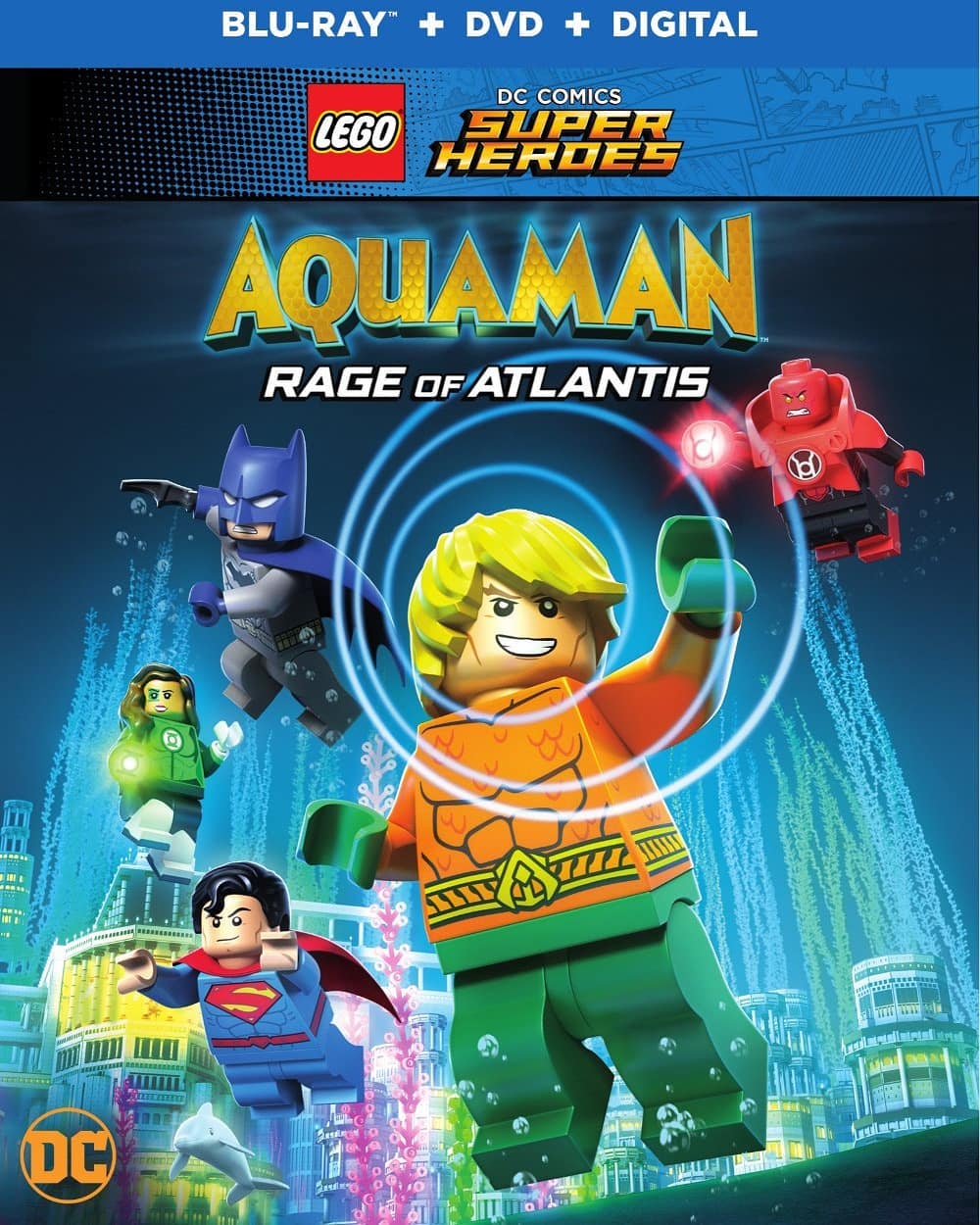 Overview: The Justice League must help Aquaman regain the Throne of Atlantis in this direct to video film.

Synopsis (spoilers ahead): The film opens at the Hall of Justice where Jessica Cruz is on monitor duty when the trouble alert goes off.  The rest of the Justice League is summoned and a new report plays with Lobo destroying a hanger at the now-defunct Area 52.  Lois Lane reports that Lobo seems to be looking for something.  Aquaman misunderstands the alert as having something to do with a lake and before the league can correct him, communications cut out.  Aquaman speaks with his brother Orm, aka Ocean Master, and Aquaman boards the “Aquajet” as Ocean Master tells him he will look after Aquaman’s kingdom.

Aquaman jets off as Lobo continues to tear Area 52 apart.  Aquaman arrives in his jet and Lobo proceeds to attack him with Lobo’s…  space… motorcycle.… and Aquaman’s jet crashes.  Aquaman calls for backup using his telepathic powers, only to have Lois Lane point out that Dread Lake is a dry lake in the middle of the desert.  Aquaman and Lobo fight and Aquaman finds himself stuck headfirst in what looks like a cannon as the Justice League arrives.  The League is shocked to discover that Lobo is about as strong as Superman and the fight is on, with still Aquaman stuck in the cannon.  Lobo is knocked into a warehouse where he finds the glowing orb that he had been looking for and makes his escape.

Aquaman is freed in time for Lois Lane to point out his humiliating defeat at the hands of Lobo.  Aquaman invites the team to Atlantis and the team departs in a submarine made by Jessica.  As they descend into Atlantis, Jessica points out a golden statue of King Poseidon, which Aquaman explains that whoever can pull the trident from the statue is the rightful ruler of Atlantis.  The League arrives in Atlantis, and thanks to a handy spray in Batman’s utility belt, the team is able to temporarily breathe under water.  Aquaman introduces the team to his wife, Mera, and the team is invited to a banquet.

At the banquet, the team is alerted to a crowd outside, where Ocean Master is questioning how Aquaman can rule Atlantis when he’s considered a joke on the surface world.  Ocean Master projects a red wave of energy that Jessica protects the team from, which causes the citizens of Atlantis to become entranced with Ocean Master, who are then turned against Aquaman.  Ocean Master brings up the constitution of Atlantis and upon examining the fine print, points out that only a full-blooded Atlantean can become king, which makes the half-surface dweller Aquaman’s claim on the throne invalid.  Aquaman is dethroned with Ocean Master taking his crown.

Mera leaves, angry that Aquaman didn’t consult her first before relinquishing the throne.  Ocean Master reveals his “Royal Advisor” to be Atrocitus and we learn that it is Atrocitus’ Red Lantern Battery rage powers that have enslaved the minds of the Atlanteans, who also attack the Justice League leading to them making their escape.

The Justice League make their way through secret tunnels and reach the “Seagate” a portal that connects Atlantis to other aquatic worlds.  Aquaman accesses the last place the portal open to as the crowds approach and the team goes through the portal, with the exception of Jessica who’s lack of confidence causes her ring to malfunction and she gets separated from the others and ends up back in the tunnels below Atlantis. Jessica is cornered in the tunnels and is saved by one of Mera’s constructs.

Meanwhile, the team appears in some sort of factory and find Dex-Starr, the Red Lantern cat (which is a thing that exists) who is rage controlling a Space Dolphin that we will later learn is named “Fishy”, and that they are preparing an invasion force of robots and find that the Seagate is being powered by the stolen orb from Area 52.  The League fights Dex-Starr and the rage-bots, which rebuild themselves as fast as the League can destroy them.  The team ends up trapped in a giant furnace. They manage to rig a parachute from Batman’s belt and escape on a hot air current through the chimney into the desert.

Meanwhile, in Atlantis, Jessica speaks with Mera who has also discovered the invasion force.  Mera is taken over by the Red Lantern energy and attacks Jessica.  Jessica manages to trap Mera under a collapsing ceiling and takes off in an Atlantean craft.

Back in the desert, Aquaman becomes delirious as he dehydrates in the desert sun and as he passes out, Batman discovers that Aquaman’s body is a natural divining rod and Wonder Woman picks Aquaman up to find the nearest source of water.

Ocean Master orders the controlled Mera to attack the surface world.  The story then cuts to the Star City Pier where Barbara Gordon and Damian Wayne are riding the Ferris Wheel.  The Atlanteans attack and Batgirl and Robin leap into action and are then joined by Jessica as Mera arrives.

The League finds a mid-desert Cantina called “The Watering Hole” and find that Atrocitus sucked up all the water on the planet.  Aquaman has a moment of self-doubt which is interrupted by Lobo entering the bar. Lobo explains that he was hired by Ocean Master to humiliate him and explains that he’s looking for his friend, the Space Dolphin.  Aquaman makes a deal with Lobo to get them back to the Robot Factory.  The Justice League attacks the robot factory and Fishy and Dex-Starr escape through the portal.  Lobo refuses to help the team and takes off on his bike.

Back in Star City, Jessica Cruz losses her nerve and retreats as Robin and Batgirl are captured.  Jessica realizes her mistake and turns around to help them.

Back in the factory, the team constructs vehicles out of robot parts as they get the Seagate working and the team enters the portal.  Aquaman and the Justice League confront Ocean Master and his forces. Atrocitus creates a giant construct from his Red Lantern battery and knocks out Aquaman and the League, who are then taken prisoner.  Atrocitus reveals that he plans to destroy the planet and activates a pump … essentially a giant straw, that will remove the earths water. Ocean Master realizes he has been double-crossed and is caged alongside the League.

Jessica returns and rescues Batgirl and Robin and faces off against Mera, and manages to break the Red Lantern’s control on Mera and the Atlanteans.

Aquaman summons plankton which forms a key to open the cage and the League escapes.  Aquaman and Ocean Master go off to confront Atrocitus while the League goes off to attack Atrocitus’ device.

Ocean Master is knocked unconscious and Aquaman and Atrocitus battle, with Aquaman pulling Poseidon’s Trident. Atrocitus is defeated and the Red Lantern Battery is destroyed.  Aquaman rallies the League who combine their attacks to destroy the device with a hand from Lobo.  The film ends with Aquaman reunited with Mera and regains his throne as the King of Atlantis.

Analysis: I’ve watched enough of these LEGO DC Super Heroes movies to have noticed that they definitely follow a pretty specific formula.   The story features a particular hero and introduces their world and establishes that the featured hero has some lesson that they have to learn.  A crisis happens, a lesson is learned, and some new Lego vehicles are built along the way.  It’s no surprise that “Aquaman: Rage of Atlantis” sticks pretty closely to this formula.

While the movie does lean toward being fairly simple and predictable, there’s still a fair bit to like here. The film does a good job of distilling the various heroes into a kid-friendly summary of the DC Universe. For example, while certainly a simplified version, the movie’s version of Jessica Cruz as a rookie trying to overcome her lack of confidences isn’t far off from her comic book counterpart.  I liked the touch of having her ring be essentially her own personal peanut gallery is a nice touch for instance.

Batman is his usual no-nonsense self and there’s some fun to be had in interacting with lighter characters like Cruz and the other members of the Justice League.  Superman and Wonder Woman probably have the least to do out of the main cast, but at the very least, the story does a good job of giving a viable excuse, at least in Superman’s case, as to why he’s basically no help on this adventure.

The story is essentially an Aquaman origin story.  I liked how Aquaman is fairly consistent with how he is portrayed in WB’s other kid-friendly DC property, Batman: The Brave and the Bold, and the film gives a few nods to that version of the character, which is always fun to see.   The movie also focuses on Aquaman’s place in the Justice League.  Aquaman is a character that in the mainstream has often been the butt of jokes.  And for those who don’t read comics or know too much about the character, its easy to be skeptical about a hero whose primary ability is to talk to fish and there are plenty of old “Super Friends” cartoons where Aquaman was pretty much useless until water was somehow conveniently introduced into the story like “Nightboat” on the Simpsons.  This film does a good job of giving a primer on Aquaman and explaining why it is that the character continues to have a place in the Justice League, and it is a well-executed focus of this story.

I also enjoyed the inclusion of Atrocitus and the Red Lantern Corps, including Dex-Starr, the evil cat…  (which is an idea that’s just bonkers in the best possible way) if for no other reason then it is an unexpected addition and I appreciated the sheer lunacy of the idea.  I also have to commend the film for finding a place in fiction where Lobo hanging out with a Space Dolphin fits just fine.

Technically the film is consistent with the rest of the series, and the animators and voice cast both put in solid work.  I’ve come to quite enjoy Troy Baker’s Batman and I like that he makes a return here.

Final Thoughts: These LEGO DC Super Heroes films will never be my favorite take on these characters, but then again, they aren’t supposed to be.  In a world where there is a lot of content that is not aimed at a younger audience, this film series continues to be a safe way to introduce the next generation into the DC Universe.  And that’s a good thing.

Editor’s Note: LEGO DC Super Hero: Aquaman: Rage of Atlantis is now available on Digital HD, DVD, and Blu-ray. You can order your copy, and help support TBU in the process, by heading over to Amazon.