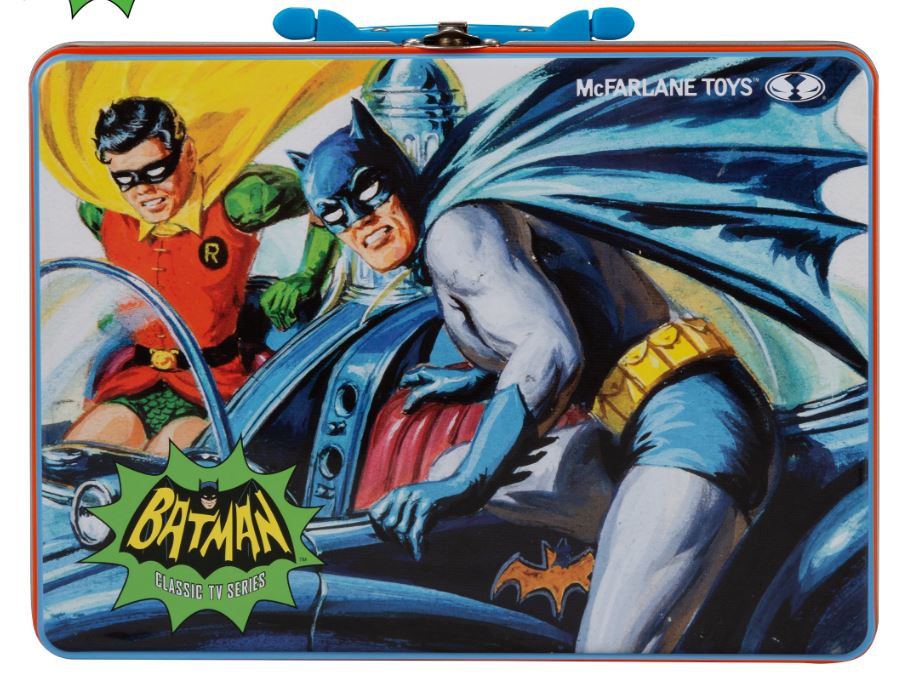 McFarlane Toys has announced an NYCC exclusive DC Retro set that features four Batman Universe action figures in a collectible lunchbox. The four figures include Batman, Robin, Joker, and Penguin, all in the six-inch scale the main DC Retro line is available in. The figures are accompanied by word balloons and collectible retro art cards. It is priced at $59.99 and is expected to ship this year. The set is available exclusively through Target.

Batman: Kapow! The debonair millionaire Bruce Wayne may seem like your average cool cat, but you would be wrong! With the flip of a Shakespeare head bust and… to the Batcave! Gotham City is filled with a rogue’s gallery of criminals eager to unmask the Batman, but they are thwarted by the Caped Crusader’s own clever ways.

Robin: “Holy Boy Wonder, Batman!” How lucky can orphan Dick Grayson get? He gets taken in by the wealthiest man in Gotham City, who just happens to be Batman. He gets to live in a mansion complete with a cave, gets to kick the villain’s butt, and cruises around in the world’s coolest car.

Joker: Who is the impractical joker with a key to crime? With a maniacal laugh, a twisted sense of humor, and a penchant for setting cunning traps, The Joker is one of Batman’s most notoriously fiendish foes. But when it comes to putting an end to The Joker’s crime sprees, Batman knows firsthand that The Joker’s jokes are never very funny… in the end.

Penguin: An arch-criminal is known for his love of birds and his specialized high-tech umbrellas. The Penguin often pretended to be legitimate and usually won the hearts of all Gothamites before he revealed his true motives. One of the four of Batman and Robin’s greatest enemies, his wealth expands his arsenal to a level no other villains achieve, utilizing giant rocket umbrella vehicles and even a custom submarine.