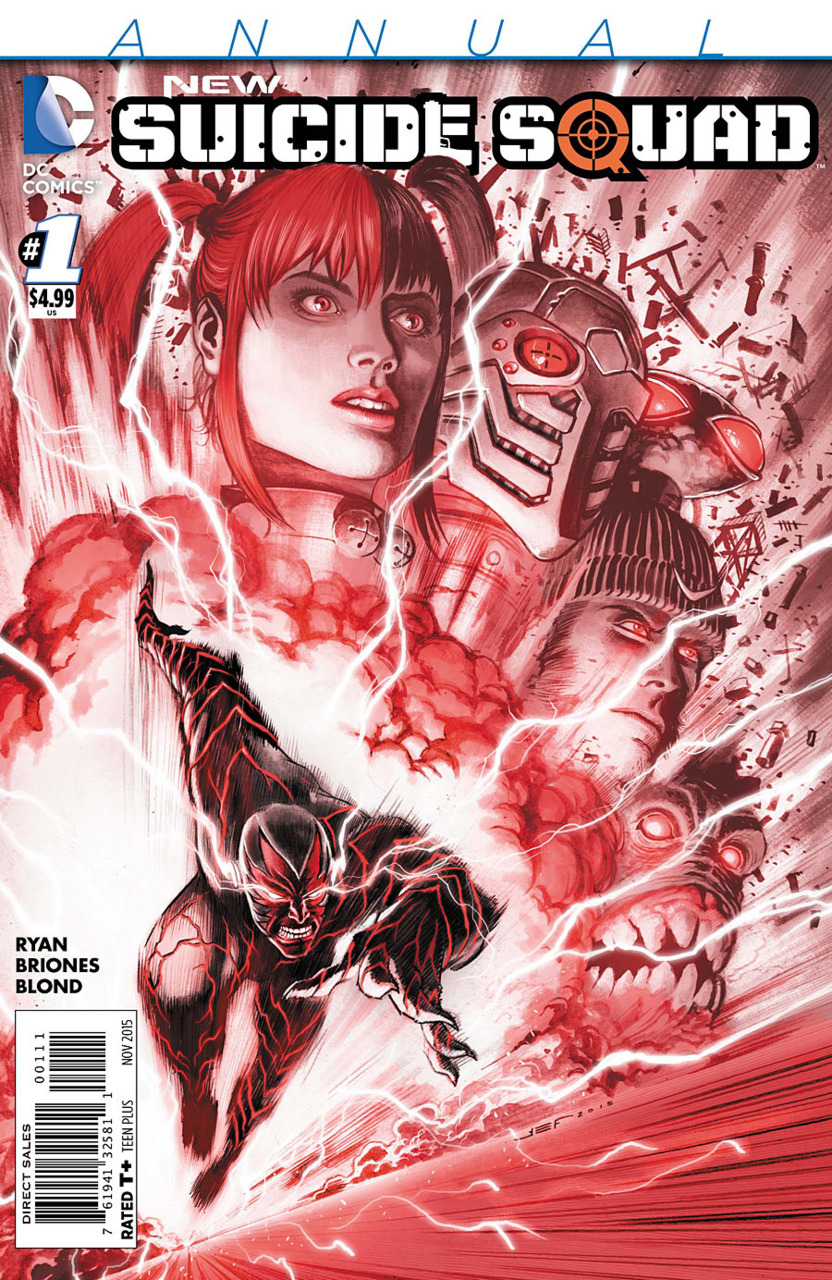 The “Monsters” conclusion starts with the League overseeing the execution of Captain Boomerang. They have him locked in a cylinder and are filling it with water to drown him for his crimes against the League. Reverse Flash runs by and is immediately attacked by kids throwing rocks at him. He overcharges scaring the kids away and finds that they are outside the prison that was holding Harley Quinn. All around her are the dead bodies of the League’s soldiers and she is sitting against a wall muttering that Reverse Flash was right. She recounts that the guards kept coming and she kept killing and it was hilarious except the kids stopped laughing. Harley says that she is always the last one laughing and killing is all she is. Reverse Flash starts to tell her his story how he was abused by his father and in order to get back at him he, Daniel West became the Reverse Flash prompting his own sister to call him a monster. Harley asks is he is still a monster. Daniel responds that he does not want to be a monster anymore. Harley wanders if just wanting to not be a monster is enough.

The scene shifts to a meeting with Saladin and Black Manta. Manta is telling Saladin about the bombs implanted in the necks of the members of Task Force X including himself. Saladin is seeing this as an opportunity. Saladin wants to use Manta to unveil the time bomb he is developing and in the process denounce the United States and reveal the Task Force X government program. Manta says that if he will do that the bomb in his neck will be activated killing him. Just then the conversation is interrupted by a League member. He reports that Harley Quinn has escaped. Saladin and Manta both head to the prison.

Saladin is angry, he wants his soldiers to find her so that he can kill her himself. He berates Manta for not being able to control Harley and asks about the whereabouts of Deadshot. Manta does not know and this angers Saladin further.

At Boomerang’s execution site Deadshot targets Boomerang’s tank. He wanders if it would be better to just kill Boomerang to put him out of his misery. He decides to try to take out the water pump instead. As he lines up the shot the pain in his arm comes back and causes him to miss the pump and hit one of the guards instead. The other guards target Deadshot’s position based on the trajectory of his shot and open fire on Floyd’s position. Floyd sees a door open and immediately opens fire with his wrist guns only to learn that the person entering the room is Reverse Flash. Daniel and Harley have already saved Boomerang from the water tank and the four of them evacuate the area.

Reverse Flash asks about Manta’s whereabouts and Floyd tells him that Manta has joined the League and is a lost cause. This news leaves the only team member that needs extraction to be the Parasite. Reverse Flash and Deadshot start to formulate a plan for the extraction of Parasite since Harley and Boomerang are not battle ready.

At Belle Reve, Vic Sage is on the phone with his government contact. They are discussing the need for more field oversight for the missions and that Amanda is in complete agreement. Presumably this is about the man Amanda mentioned in issue #12 of the monthly series but we as the readers are not sure since the discussions also includes Amanda Waller’s new job.

Back in the field, Saladin and Manta are still discussing Saladin’s plans. Manta wants to focus on the escapes of Harley and Boomerang but Saladin thinks that Manta is wavering. Elsewhere, Deadshot and Reverse Flash attack the armory where Parasite is being held. They meet resistance but Deadshot starts using the weapons there to repel the defenders. One unlucky soldier crashes into vials labeled with Bane’s Venom drug and immediately shows the effects of the Venom overdose. Deadshot is running out of weapons and Reverse Flash finds where Parasite is being held.

Saladin and Manta continue their argument. Saladin accuses Manta of causing chaos and discord as well as cowardice when he says that Manta is afraid to die. Manta insists that he is not he just thinks that he will be more useful to the League alive. Saladin has heard enough of Manta’s argument and attacks him. Manta fights back realizing that Saladin is just like everyone else and the League will not provide the cause he is looking for. Manta blasts Saladin.

Reverse Flash rescues a thin and gaunt Parasite who thanks him by taking “most” of his energy. Parasite attacks the guards giving Deadshot a reason to remember him. Black Manta attempts to open the door to the armory just as Saladin activates the time bomb. Manta finds the others and says that they need to get out of there. Manta insists that he was acting in the interests of the Squad and he faked his allegiance to the League and Saladin to give him the opportunity to complete the original mission. As the team approaches the truck the kids start to attack by first throwing rocks and then shooting at the escaping squad.

The Squad heads out and discuss what caused the kids to attack. Harley says that she is the reason and Manta says that it will not matter. He reveals that the time bomb was activated and the compound will be destroyed in approximately 45 seconds. Reverse Flash is infuriated, he does not want to see the innocent civilians harmed. Parasite chides him saying that the civilians are the ones that are attacking them now. The others do not see any way to stop the explosion and many of them do not want to find a way to save them. Daniel does not want to hear any of this and says that everyone deserves saving. He leaves the truck to fetch the bomb. While he moves to remove the bomb we hear the conversation he had in the beginning of this issue with Harvey. As Daniel tries to escape the explosion, he is caught in the blast and is presumed dead. Reverse Flash died a hero.

Back at Belle Reve, Bonnie relates the success of the mission and the death of Reverse Flash. Amanda does not care. Amanda will be going on the field missions from now on, Sage is up to something and now Amanda needs Bonnie to keep an eye on him.

In the epilogue, at the armory the Pearl Group man and another “suit” find the body of the soldier that fell into the Venom vials. With this soldier, Task Force X’s days are numbered.

Harley was non entity in this issue but her characterization here is telling. She is definitely questioning herself and she is starting to see how her actions and attitudes affect others. I am looking forward to seeing more of her story arc and I am hoping that she may become more of an antihero and as a result continue to leave the influence of the Joker.

Deadshot continues with his physical issues. It seems that this is becoming a common focus in the team books. In another title, I am reviewing, Teen Titans, Raven is suffering from some malady that is affecting her usefulness to her team. I will call this Deadshot arc as unoriginal and out of place here.

The character mostly explored here is the late Reverse Flash. He had the complete character cycle in this whole story line. He questions his prior actions and even comes to terms as to why he did his past crimes. He makes the decision to change and carries out that change basically dying not as an antihero but dying as a hero.

I found the Deadshot illness troubling but the Reverse Flash arc made up for that. We learned some things but are faced with new questions mainly how will Amanda fair in the field and what is Sage’s agenda. A very satisfactory read and I continue to look forward to this title.