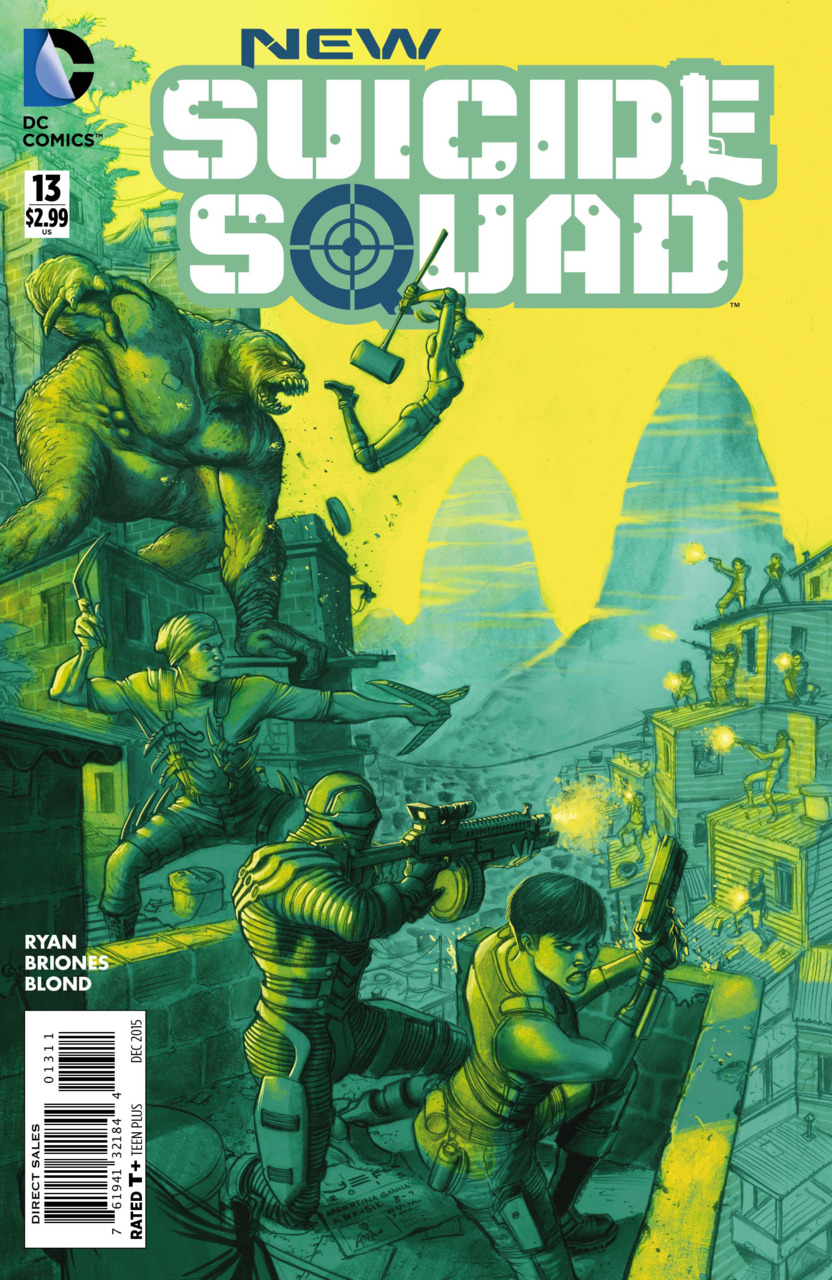 “Freedom” opens up mid operation. Captain Boomerang and Deadshot are working a deal with a drug dealer. The drug in question gives the user a random super power along with the high. Boomerang has the money and asks for a sample of the drug to examine. This makes the dealer suspicious. The dealers draw their weapons as Deadshot draws his gun and Boomerang creates a construct boomerang. Parasite crashes through the wall to join the fight followed by Harley Quinn and the fight erupts. We see that the meeting was occurring in the back room of a club and Amanda Waller is also in the field. Amanda asks Boomerang what happened.

Back up for the dealers arrive and they are juiced up thugs exhibiting Meta human powers to attack the Suicide Squad. Deadshot dives for cover and tries to pick out a target until his arm starts to hurt again. Waller asks him what is wrong as Floyd goes for his pain medicine. Parasite engages the juiced up thugs and in the process of drawing in their power, explodes himself. Harley and Amanda dive out of the exploding room to the local police response. Boomerang throws a rock at one of the riot officers inciting a riot to allow the Squad to escape to cover.

Inside the club, Deadshot reports that Parasite overdosed on the drug as he was absorbing the junkies powers and is now in coma. Amanda orders him to stay put given the condition of his arm and try to locate the boss and inform the rest of the Squad. Waller orders Boomerang and Harley to be a distraction. As Amanda moves from the huddle, she notices that the truck they are hiding behind has a Pearl Group logo on it. Deadshot reports that he saw the boss run out the back door. Amanda tells Floyd to stay put with Parasite, she will handle the boss.

Amanda finds the boss and orders him to freeze. The boss notices that Amanda’s gun has an M.A.R.S. systems logo on it as she shoots him and calls Bonnie at Belle Reve. Amanda asks her to cross reference the Pearl Group, M.A.R.S. Systems and Clear Pharmaceuticals (Clear Pharmaceuticals is the manufacturer of Deadshot’s pain pills). Bonnie finds that all three are owned by the Calvary Corp which also owns Corvus Corp, the company that owned the Lazarus Pit refinery the Squad attacked in the previous story arc. Amanda decides to go off the grid. Bonnie tries to contact Amanda and the other Squad members in the field and no one answers. She goes to Vic Sage and reports the new developments to him. He storms off to the control room and detonates all the all the Squad member’s neck explosives and sets up a hunt for Amanda who does not have any explosives on her. Next issue “Boom”.

It is interesting to note that Black Manta was not in this mission at all. We do get a little more of Harley processing what happened to her in the previous issues but right now she just seems to be dealing with it by killing more people.

The issue was good but it did not have the character development I had been seeing in previous issues, but as a superhero comic the action delivered.