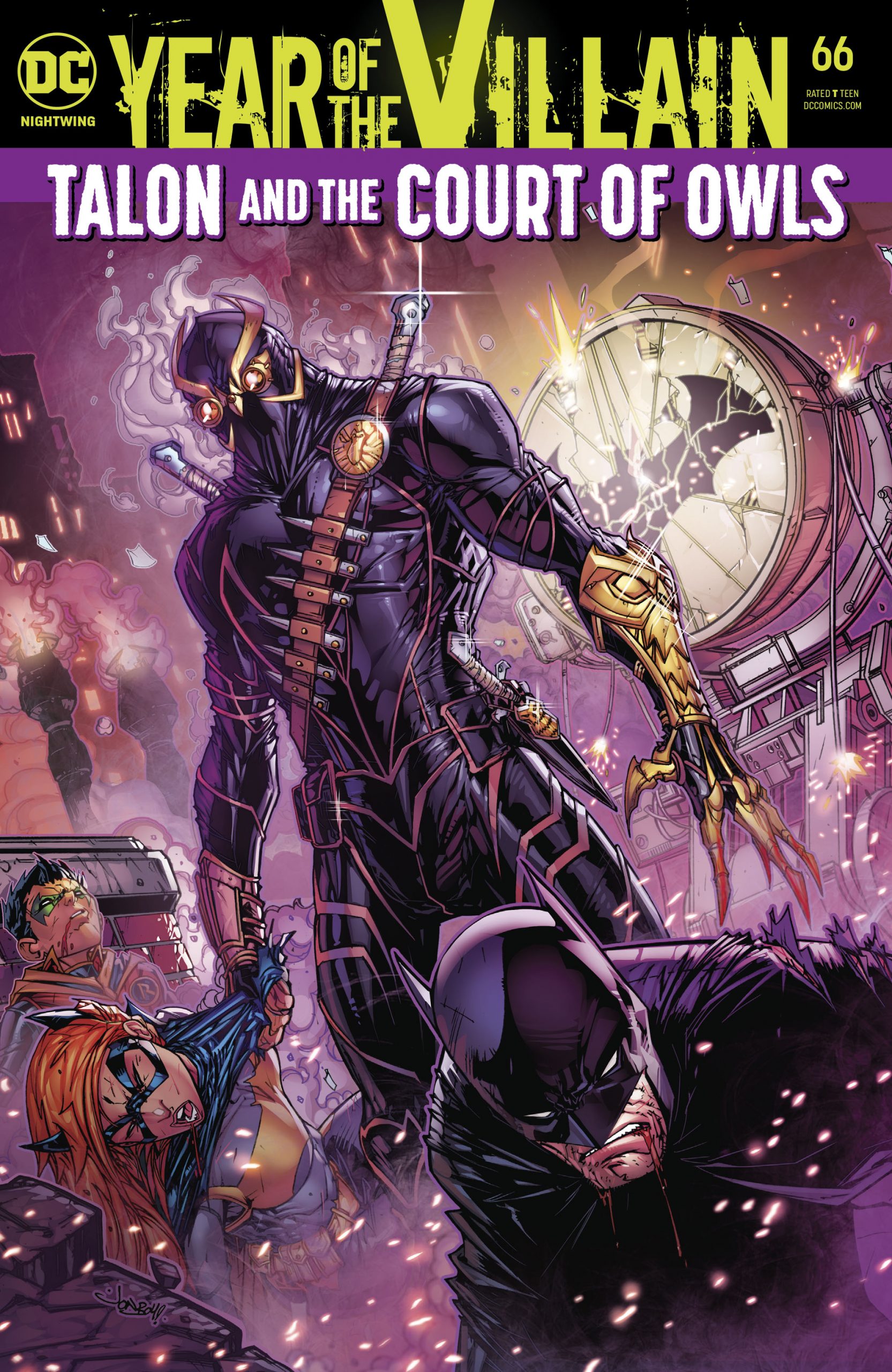 Overview: Dick gets his memories re-written and everyone just stands there.

Synopsis (spoilers ahead): Our story begins with a cameo of the other Nightwings trying to rescue some kids from a burning building. Nightwing Blue is worried about the perpetual darkness and glowing green symbol covering the sky. Nightwing Red tells him to focus on the job and they get the kids onto the roof, and Nightwing Gold forms a rope-line that they’ll use to ferry the kids over to the next roof.

They manage to cut it a little close and Nightwing Red barely escapes the burning building with parts of his uniform on fire. He pats it out and they get back to business.

Meanwhile, in a spooky, gothic mansion, the Court of Owls is monitoring the situation with Cobb and Dick. They exposit about all their hard work and how all of this was their secret plan all along (go read the latest Nightwing Annual if you want to learn how their plan was pulled off), while Dick stands paralyzed on a rooftop with Beau and Cobb watching him. Cobb explains that the goggles he put over Dick’s eyes are basically rewriting his memories, this brings up some questions, but I’ll leave that for the analysis.

Cobb goes into a deep monologue about how we’re defined by our memories and so if you erase someone’s memories and then implant a bunch of new memories, you’d basically be creating a new person. Beau tries one last attempt to stop him, but is stopped just by Cobb standing in front of her, ostensibly reminding her of every other time she tried that in the last issue and it not working.

We then flash between fantasy land and present-day as Cobb explains each and every action they are doing to rewrite his memories, from making it the Court that had adopted Dick after his parent’s died, to forming his childhood around living in a monastery, trained by Cobb personally. They go on and on about his training and how his identity is being completely changed, and Beau demands that it can’t possibly work.

One of the observing Court watchers questions if she’s right, but the other watcher, who’s clearly the woman who oversaw Dick’s mind-loss in Nightwing Annual, is confident it can’t be overcome. The memories then transition to the time Cobb tried to kill Bruce Wayne. They retcon it to say that after Bruce Wayne beat Cobb, Dick would have come along to back Cobb up, finishing off Bruce Wayne, without remorse and with deadly efficiency. They talk about how in order to make Dick a killer, they have to make him capable of killing, so they implant this memory in him killing what in reality is his closest family, to silence his inherent morality.

Dick awakens and called himself Talon.

The other Nightwings are helping a team of paramedics deal with the children they rescued, and help give the doctor some pep-talk to help him keep going. They realize they are exhausted and should get some food in them before they get back to work, and while they are talking, they are ambushed with shurikens and throwing knives.

They are approached then by Dick as Talon, telling them that “the court of owls…has sentenced you to die”.

Analysis: The first question that came to my mind while writing this review was: Did the Court already have their mind-control goggles before Lex Luthor showed up? They had already gotten Dick’s mind erased and had him set up for this procedure, but if they already had the goggles ready, then what was Luthor’s contribution to this? If Luthor did give them the goggles, then what was their plan before Luthor decided to be the God of Supervillains?

Another question is: What’s going to happen when Dick learns that Bruce Wayne is still alive? His memories do not add up at all with the current continuity. It would have made more sense to fabricate a completely new person that Cobb and Dick had gone after. Someone the Court could realistically frame Dick for in his mind. Using Bruce Wayne as the catalyst is just setting themselves up for failure and this incompetence is making me believe they didn’t actually have the goggles in mind and were making this all up as they went along.

Overall, this was a huge lackluster event in terms of writing as well, especially when compared to the great piece of writing that happened in the Nightwing annual last month. Regardless of content, the annual was just really well put together and structured phenomenally, while this issue is just loaded with exposition. What they should have done was forego the Court and Cobb monologuing over what’s happening, and instead have us watch Dick in his mind go through everything they are doing. We already see images of it all happening, so instead of monologuing, just show us the memories like a small story. It’s not that hard.

The parts with the Nightwing gang were handled pretty well though, I like how this team has consistently been shown not at the stalwart protectors, but just another facility of the city, and I really don’t get why they are acting outside the law. It would make more sense if the Nightwings were some elite SWAT team or something formally recognized by the local town government.

Final Thoughts: There’s just way too much exposition and not enough actually happening. The next issue should be a little better, there should be some good violence going on. But all the goodwill they earned from the Nightwing annual is getting lost quickly.