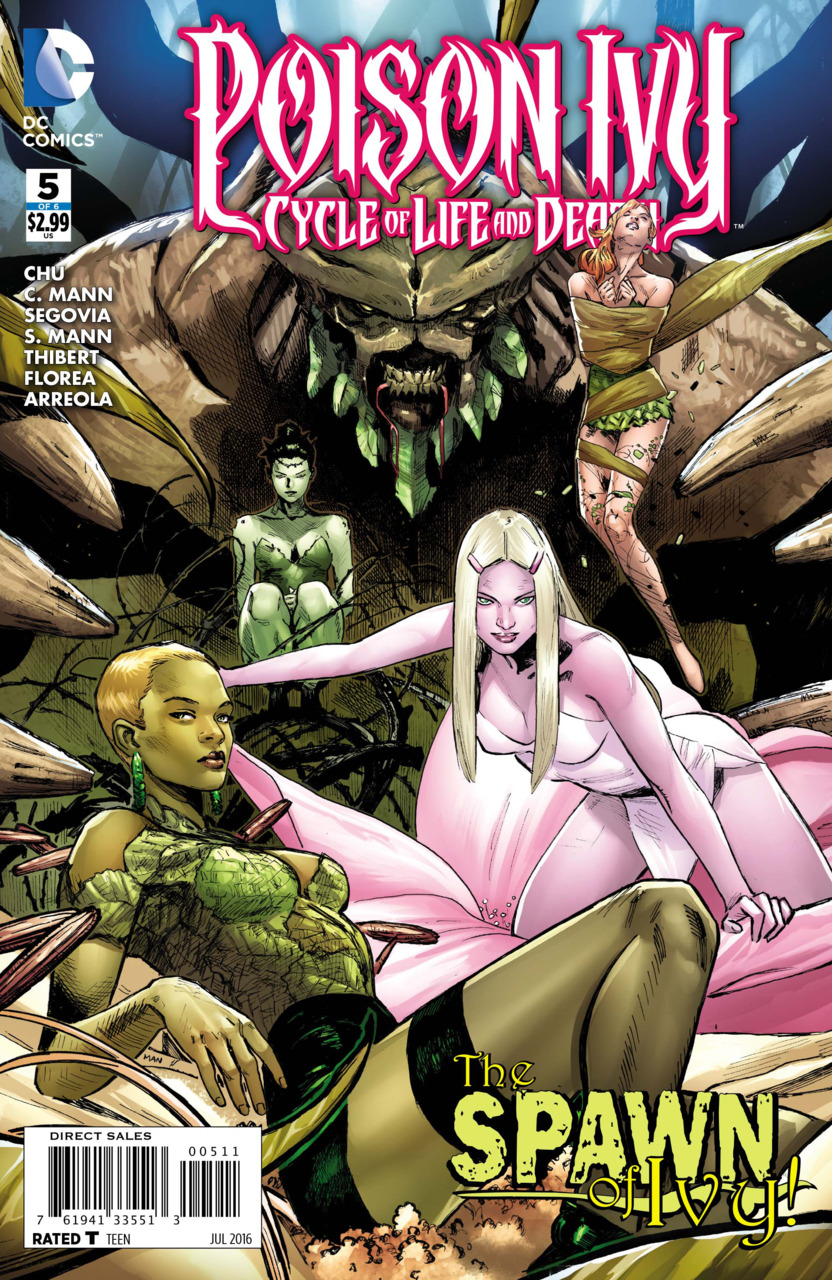 Ivy’s sporelings have grown up and want to spread their limbs and experience life. However, Gotham City is full of danger for the inexperienced plant creatures in Poison Ivy Cycle of Life and Death #5.

Someday, all this will be spoilers…

Some 25 weeks have passed since issue #4. Ivy’s three sporelings have grown quickly and appear to be older teenagers. They are itching to get out into Gotham but Poison Ivy is being very protective of her three girls. Rose seems to be the sweetest and most innocent of the trio. Her pod sister Hazel seems to be all too willing to be influenced by Thorn, the sporeling created in Dr. Lee’s lab and subjected to unknown horrors. Thorn doesn’t have the respect for life that Ivy tries to teach her girls and strains hardest against the leash. Ivy just wants to protect them but they feel imprisoned in the apartment.

Darshan arrives with a karaoke machine to give the girls something to keep them out of trouble. It just gives the girls the idea to go to a real lounge. Darshan points out that Ivy can’t keep them locked up forever before he heads back home to get some sleep.

That night, while Ivy sleeps, Thorn encourages the girls to make their escape into the wilds of Gotham City. Ivy wakes up and finds that they are gone and heads out to find them. The trio have made their way to a strip club where they work some horticultural mischief to gain entry without IDs. They are having a good time but predictably get hit on by the male patrons of the establishment. Thorn takes exception to one man’s hand on her derriere and turns his mitt into wood. This was the same thing that happened to the scientists in the lab she was experimented in. The cops are called on the girls.

At GCPD Detective Manning wakes Detective O’Shea to tell him of the reports of a bouncer being attacked by a ficus and a man having his hand turned to wood. They recognize the similarity to the events at the lab a few months ago. Even though that case was mysteriously shut down they decide to head out to the strip club to see what is happening. They find the club enmeshed in spiked vines as Thorn uses green tendrils to whip at and trap the cops.

Ivy shows up and orders her girls to stop and release the police. They use their botanical wiles to convince the cops on the scene to let them escape.

At home the girls are on cloud nine over the night’s excitement. Ivy chastises them but realizes that she has no punishment to hold over them. They have already been grounded their whole lives so what more can she do? The girls think they are freaks and she tries to impress upon them how special they are. Her argument meets with limited success so she traps them in a wicker hut while she figures out what to do.

Ivy communes with the Green – the mysterious plant energy that she has a unique and special relationship with. She senses a strange interference with her powers and is confronted by a gigantic plant-like creature asking ‘Where are they Isley?’. The creature has the voice of Doctor Grimley and attacks Ivy and traps her against the floor. Until next month…

Writer Amy Chu continues her terrific tale of Ivy and her sporelings. When we left them last month, it wasn’t clear where she was taking this story but taking the sporelings into their teen years was a great idea. She really makes you feel the claustrophobia the girls must feel and she plays on it effectively. The personalities of the three are distinct if somewhat standard. One is sweet, one is conflicted and the third is a bit of both. There is a lot of story to tell in these pages though so her efficiency of setting up their characters works well. The dynamic of the three together also succeeds.

There is also progress in the mystery of the lab killings, though the focus here is really on Ivy’s problem with her girls. The big-bad that has been hinted at is now out in the open just in time for the final issue next month.

The art by Clay Mann, Stephen Segovia, Sandu Florea and Art Thibert works well together and the colors by Ulises Arreola help tie the book together. There are some differences in the pages but there aren’t the clumsy perspective issues that the second issue had. Notable panels include the one where the girls are out on the town and where Thorn stands over the man who took liberties with her. Also, when Ivy shows up at the Lounge she is shown as a powerful goddess commanding her wayward children, very effective work.

I am completely taken by this mini. Ivy has emerged to be a very interesting character and now that the sporelings are coming into their own I just want to see more of them all. I’m worried about what will happen to the girls in the final issue. I would love a monthly book about Ivy and her children and I hope they aren’t killed off to wrap up the continuity. I can’t help but think about stories with Aunties Harley and Selina visiting periodically. As I find myself thinking about these things I realize how effective this mini has been. I’m giving this issue a 4.5 rather than a full 5 Batarangs but if the final issue is this good I’d be inclined to give a perfect score. I highly recommend this miniseries.