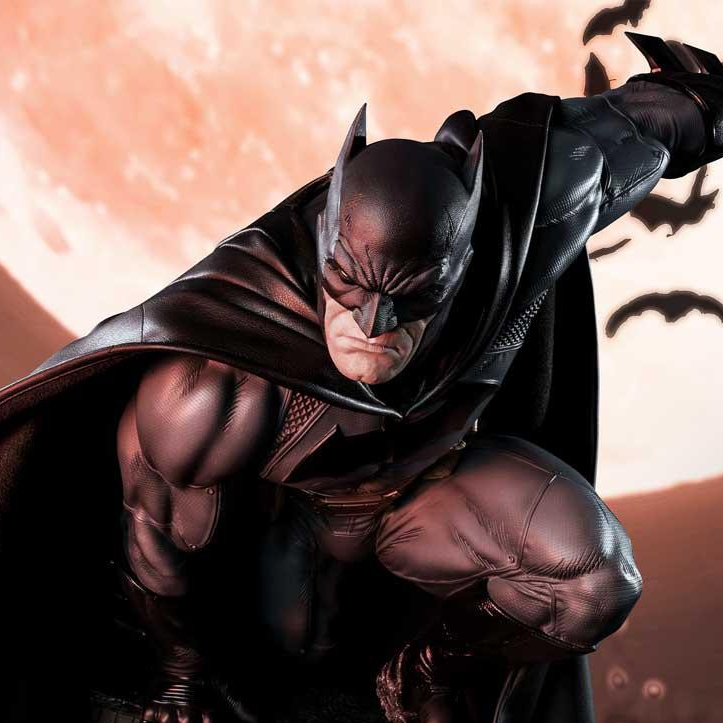 Prime 1 Studio has released details for their latest Museum Masterline statue, which features a triumphant version of Batman based on a concept design by Jason Fabok. The one-third-scale statue measures about forty-three inches tall. The statue is designed as a companion piece for the previously announced Penguin statue. The statue also includes a special pre-order bonus of a swappable arm that holds a batarang. The statue is priced at $1,399. It is expected to ship between October 2023 and January 2024. You can preorder the statue directly from Prime 1 Studio.

“Ladies. Gentlemen. You have eaten well. You’ve eaten Gotham’s wealth…its Spirit. Your feast is nearly over. From this moment on…None of you are safe.”

Our talented sculptors and painters at Prime 1 Studio enjoyed bringing Jason Fabok’s latest Batman statue come to astonishing life. They have imbued it with as many real-world textures and as much realistic detailing as they could. At a showstopping 43.7 inches tall, Batman is atop a gothic edifice, probably overlooking his beloved Gotham City. He’s ready to swoop into action on criminals unaware of the world of hurt that Batman is about to introduce them to.

Batman’s pose is taut, and athletic. His muscles are clearly defined, and his intent is clear. Be treated to a multitude of textures, and details that Prime 1 Studio has deemed to pack in into this statue: the leather-like texture of his cowl, the pores on his face amidst his focused scowl. His costume has been appointed with piping, wrinkles, and shading to bring forth the awesome character of Batman’s iconic uniform.

And that poseable leather cape! Pose it to your heart’s desire, to bring out the most dramatic, dynamic action pose that you can.

Pre-Order this Bonus Version from our official online store or any authorized distributor and will you receive a Bonus Part: an extra, swappable right hand holding a Batarang!

Batman’s base is a medley of realistic building materials that are appropriate to this environment…concrete, rebar, metal piping, and snow, all come together to bring you into the world of Gotham. Look even closer for some cool Bat-themed easter eggs.

And while this statue may be impressive on its own, this statue is even better when displayed together with MMDC-56DXS The Penguin Deluxe Bonus Version Concept Design by Jason Fabok!

Jason Fabok’s Batman Triumphant is sure to be an instant classic, so Pre-Order this today!