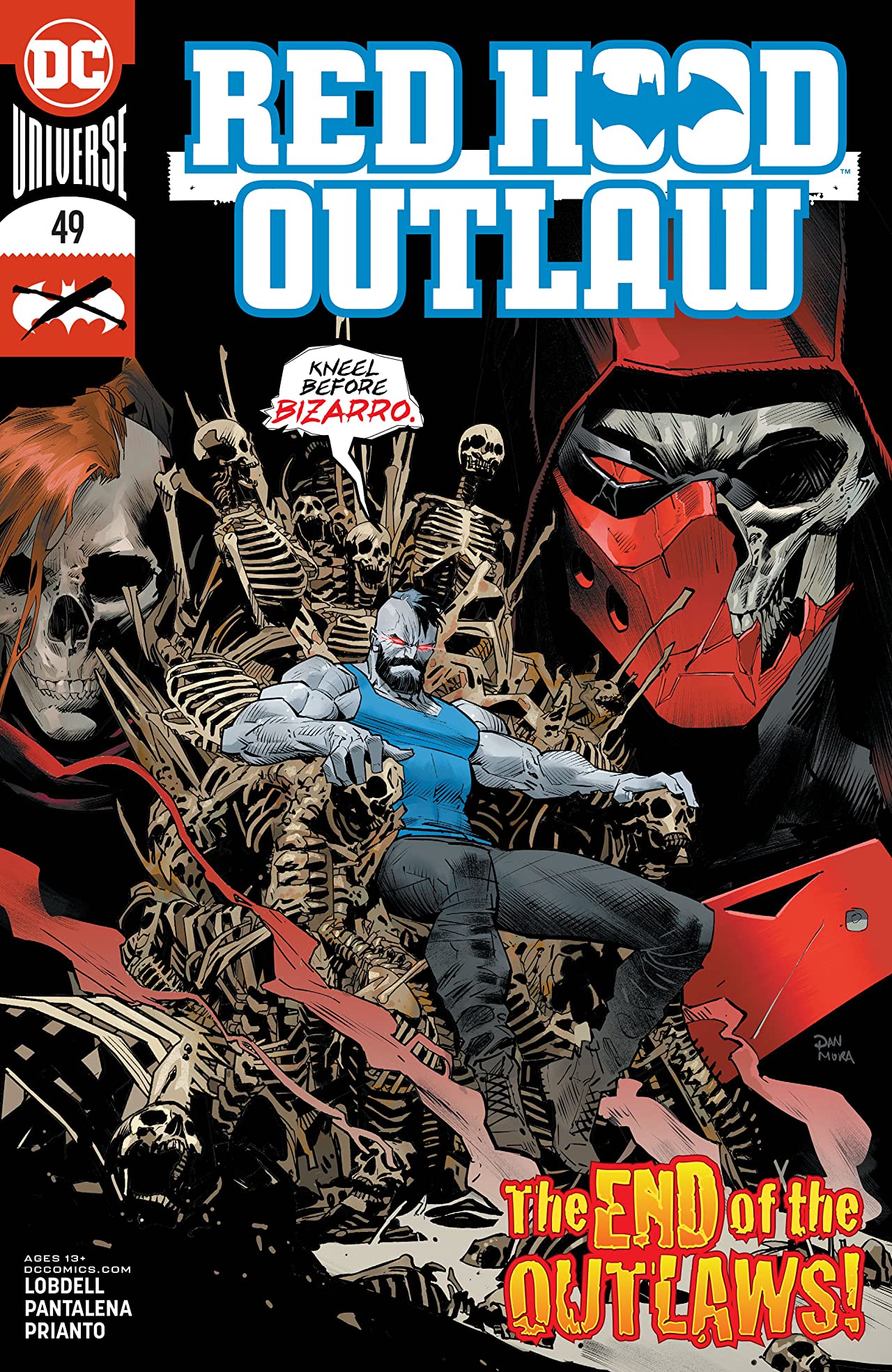 Overview: This issue sees the return of the story of Trigon after the Joker War: Collateral Damage tangent.

Synopsis (spoilers ahead): We pick up where the Outlaws of old join the current Outlaws. Red Hood the slightly younger, Arsenal, and Starfire join the fight as Red Hood the slightly older, Essence, Artemis, and Major Glory work to close the door to the Chamber of All, trapping Trigon and seemingly Bizarro with him.

Inside, Bizarro discovers that he in fact killed Trigon. The lesser demons proclaim Bizarro the killer of Trigon as Bizarro tries to plead that he didn’t mean to kill him, just stop him. Bizarro realizes that he is stronger than he has known and starts to leave when the demons change their proclamation. Bizarro has set them free, and he is their new liege. The killer of Trigon is to take Trigon’s place on his bone throne. Bizarro delivers a hard no.

Outside, Hood the slightly older asks Kory if she sees Bizarro; she says she cannot see through the necropolismic energy on the other side. She is not sure that she would recognize a Bizarro if she could see; she has never known Bizarro. Both Jasons notice S’Aru. Younger Jason feels that this is mostly his fault. He has spent his entire life protecting the chamber and now with a momentary lapse of faith he is watching it being obliterated forever. Older Jason tries to comfort his younger self, telling him that life is more than screwing up, it is about standing up and trying again.

Essence’s screams interrupt this moment. She is being attacked from behind by a demon. Younger Jason fires his pistols into the demon, freeing her, but she drops her sword, which frees Isabel. Isabel recognizes both Jasons, but she says that it does not matter that she knows them as she doesn’t matter either. Isabel reaches for the sword.  Older Jason tries to stop her, saying that she does not have to do this. Isabel says that they are in the middle of a war and they need an immortal ninja goddess a lot more than they need a flight attendant. Older Jason tells her that he loves her. Isabel tells him to stop, but it is nice to hear, as she reaches for the sword presumably entering it again and glowing in Essence’s hand once more. The Outlaws continue their fight to seal the chamber.

Starfire is hit from behind, and Arsenal releases several arrows into the demons. Arsenal catches Kory as she falls into his arms, losing his hat. Older Jason sees how happy the two are. He wants to warn them, but he knows that he can’t. Inside, Bizarro picks up a boulder to presumably throw it at the door to help his friends on the outside. The demons plead with Bizarro to stop as that is their only way out; they mean to escape and rule Earth. They turn on Bizarro. Bizarro in turn uses his frozen breath on the demons, stopping them from attacking by building an ice wall between him and them.

Glory shouts that it is now or never, S’Aru agrees, and when the chamber collapses, anyone inside will cease to have ever existed. Arsenal points to a door saying that is the one the original Outlaws came through but soon discovers that he is confused.

Artemis says that Bizarro has to get out now. Older Jason sees Bizarro. Bizarro has made his decision; he is going to stay in the chamber. Bizarro killed Trigon and as a result, he is their ruler. If he is not there to rule, the demons will invade Earth. Bizarro hugs Artemis and older Jason, saying that everything he is, is because of them. An instant later, he is gone. Artemis finally pushes the chamber door closed, honoring her friend’s sacrifice.

S’Aru points to the door the original Outlaws should take to escape and return to their own time none the wiser.  Glory starts to usher Artemis and Hood out the other door, but the older Jason Todd calls Roy. He hands Arsenal his trucker hat, and Roy asks if he will see him again. Jason says absolutely. He replaces his mask, and they make their escape as King Bizarro sits on his throne with his subjects surrounding him.

Analysis: My favorite type of story involves the supernatural and emotions. This story has both. Unfortunately, I feel that some of the emotion here is forced. It is good to see Trigon without Raven even though he is dead.

It was an interesting move to bring the two sets of Outlaws together. That, besides Bizarro’s sacrifice, delivers the emotions. At the time of the release of this story, Jason already knows that Roy is dead in his time, but he references “them,” meaning Starfire as well. I do not know how Jason could know that Starfire was killed in the Ghost Sector in the pages of Justice League: Odyssey.  That leads me to some questions I had as I read this story.

In my synopsis, I used the word presumably a couple of times. That is because I was not sure what I was reading or seeing. The first time is the reappearance of Isabel. She was trapped by Essence in her sword, but it seems that she might be the power inside the sword? I am just assuming that she returned to the sword when it started glowing in Essence’s hands. The second time was when Bizarro is holding the boulder over his head while the demons shout at him to stop. What is Bizarro doing? Is he trying to help his friends on the outside? When he says his goodbyes to Artemis and Jason, what would stop them from grabbing him and pulling him through the door to them before they seal the chamber off? What was the point of Bizarro’s “sacrifice” other to create an emotional element and perhaps lead to the end of this series? I do not like forced conclusions of characters like this.

This leads me to the art. I am not really a fan of the cartoony style, and this is definitely cartoony. I might give it a pass for this because of the supernatural subject matter, but there is one aspect that I will not. Despite Kory’s costume at this time, which basically is nonexistent, I also disliked the gratuitous butt shots of the women in this issue. First is the shot of Essence while the younger Jason shoots the demon, and the second is repeated focus on the butt of Artemis. It seems the women are wearing tight pants while the men are wearing baggier pants that do not accentuate their assets as much as the women. I find that distracting and for me unwelcome to the story.

Final Thoughts: I was not captured by the art or that moved by the sacrifice of Bizarro. I was, however, moved by the interactions of Jason with the original set of Outlaws even though I am not sure that Jason even knows the true fate of Kory.