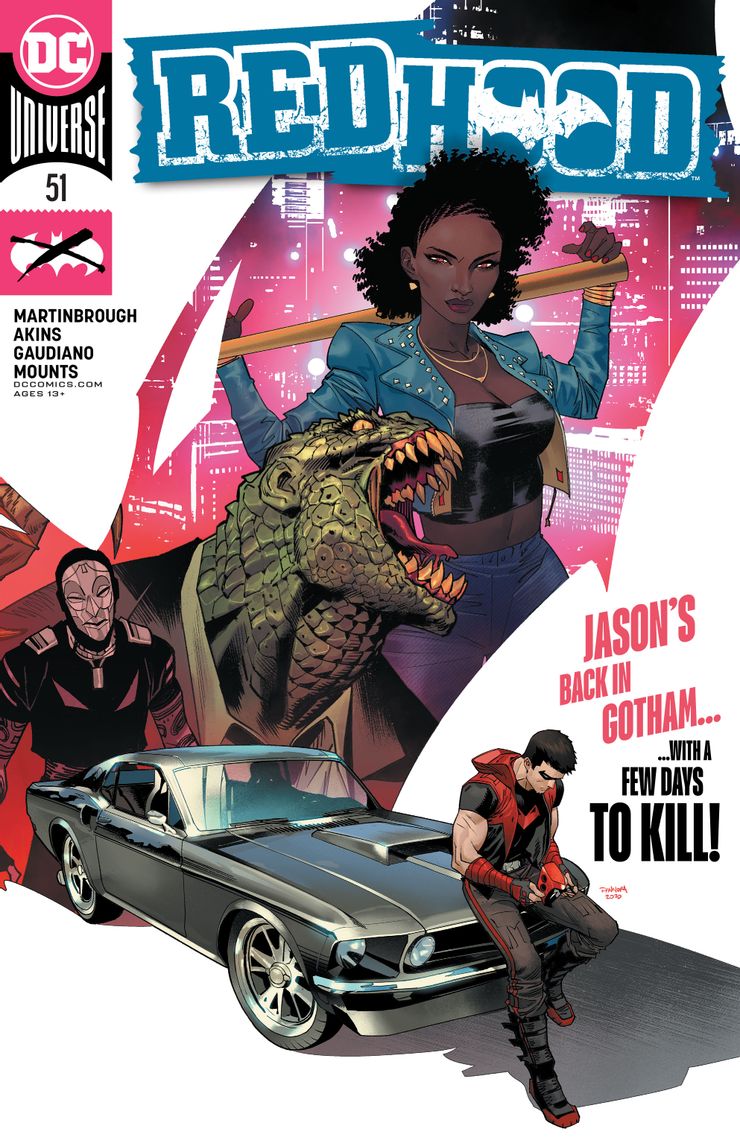 Overview: Jason Todd returns to the Hill, a secluded neighborhood in Gotham City.

Synopsis (spoilers ahead): The issue opens up at the Hill, a secluded neighborhood in Gotham City that remained mostly unaffected during the chaos of the Joker War. There, a man named Korlee Jr., instructs his gang to seize a shipment from Black Mask, a move that will allow him to grab control of the docks. The Hill may have avoided attention from some of Gotham’s more insane villains, but for several new groups of criminals, it’s home sweet home.

Korlee Jr.’s endeavors are interrupted by the arrival of a second group of masked people, vigilantes led by a woman named Strike. The relative peace and quiet is shattered with a resounding ‘boom’ as Korlee Jr. detonates a series of explosives, allowing him and his people to escape.

The following morning finds Jason Todd standing in an old, run-down apartment in the Hill, cell-phone in hand and finger hovering over the ‘call’ button. The name ‘Bruce Wayne’ is lit up on the screen. Before he’s able to call, a young woman and long-time friend of Jason’s, Dana Harlowe, arrives.

He greets her joyfully, explains that he’s in town taking a break from work, and thanks her for looking after his place for the past twelve years. The Hill has changed a lot while Jason’s been gone, and Dana offers to buy lunch and give him a tour.

In a private backroom in a shoe store, Korlee Jr. tells another gang leader, Gudda, that his money is coming and he just needs a little patience. The door behind them opens and a third man, by the name of Thomas Misell, enters. Misell is the creator of villain-inspired merchandise, specifically shoes, which is quickly gaining popularity, although his latest inspiration of Killer Croc styled sneakers isn’t vibing with Korlee Jr.

The room is a mix of personal vendettas, goals, and three different criminal leaders all with their own hidden motivations.

Outside in a bustling park, Jason and Dana grab lunch from a food truck while Dana explains that a bunch of adults who live and own property in the Hill formed a neighborhood watch to protect what’s theirs’. By banding together, and with a little extra help, they managed to avoid the craziness of the Joker War. Jason inquires into what that ‘extra help’ refers to, but Dana deflects his question by stating Jason needs to loosen up and that he should come hang out with her tonight.

In an extremely richly decorated house, Korlee Jr. and Thomas Misell discuss the loss of capturing Black Mask’s shipment and the tech that Korlee Jr. had to leave behind to avoid getting caught.

Misell says offhandedly not to sweat it as he made the call, but Korlee Jr. is quick to painfully remind him to not overstep. He orders Misell to stick to designing sneakers and real estate, and let Korlee Jr. handle the streets. After all, they’re his area of expertise, and Misell’s only role is to keep the cash and merch flowing.

The scene shifts back to Jason, who’s seated around a restaurant table with Dana and her friends. A group of men and women, who live in the Hill, explain to Jason how they had to step up and help protect their neighborhood during the Joker War. Dana repeats that Jason really needs to just relax and drags him to go dance with her as the scene shifts to a bar.

At the counter, Thomas Misell explains to the giant figure sitting next to him that it’s time to show the idiots on the street how it’s done. Gudda, Korlee Jr., the vigilante group popping up to protect the Hill, there are too many fires burning. They need to know who’s boss, which is why Misell busted his companion out of Arkham.

“Name your price,” Misell directs his associate, and Killer Croc responds by handing him a slip of paper containing it.

That night, in the office of Korlee Jr., Jason Todd, clothed as Red Hood, casually makes his presence known to Strike, the woman who led the attack against the gang leader two nights before. Strike is looking for something in Korlee Jr.’s office; she tells Jason she’s keeping an eye on a criminal and moves to open a desk drawer. The movement detonates a bomb, the resulting explosion decimating the building.

Starring aghast in front of his television, which is reporting the loss of his building, Korlee Jr. demands to know what the hell is going on. Gudda isn’t answering his phone, and before Korlee Jr. can issue instructions to his henchmen, the back wall implodes as Killer Croc steps through, dragging Korlee Jr.’s unconscious bodyguard behind him.

Korlee Jr. stares at Thomas Misell, who steps through the doorway after Killer Croc. He announces that his name is not Thomas Misell, but rather Tommy Maxx, and he’s here to show everyone how it’s really done.

Analysis: Red Hood #51 is a wonderful introduction to a new arc, one I’m very interested to read more of. Originally created by Christopher Priest and Martinbrough for the one-shot titled Batman: The Hill #1 in 2000, the Hill sets the stage for a plot of low-level crime financed by the villain -inspired merchandise aided by the economics of gentrification.

Written by Shawn Martinbrough and brought to life by the artistic talents of Tony Akins and Stefano Gaudiano, the relocation of the story to a quiet neighborhood in Gotham City sets a very different tone and pace for Jason Todd than what we’ve read in past issues.

It’s a fresh start with a new cast of characters, and as much as I did love the wild, exotic stories by Scott Lobdell with the Outlaws, I have to say that I greatly enjoyed reading this issue. Here, we see Jason actually do what he says he’s in town for; to take some time out and get a break from everything. We’re also introduced to a long-time friend of Jason’s, Dana Harlowe, and her varied group of friends, which really portrays a sense of community from the people who live in the Hill.

An interesting thing about this issue is that while Jason is the main character, the majority of the story’s focus isn’t actually on him. Rather, Martinbrough takes his time setting up the different groups of villains and centers quite a bit of time around them. Together, they all make for a very interesting blend of motivations, each person is using the other to fulfill their own objectives.

Perhaps because this is such a different story than the ones we’ve read in past issues, I found it to be really refreshing and intriguing. Already there are several different groups of people trying to achieve their own goals and I’m curious to see how Red Hood will get himself involved with each of them. Another aspect I thought was neat is the idea of capitalizing on villain-inspired merchandise and using those sales to fund other criminal related activities.

Final Thoughts: Overall, I’m happy with the start of this new arc and the direction the story is going. A group of community-based vigilantes, bad guys moving against each other with some rather explosive results, and Red Hood back in Gotham with the start of a new adventure.