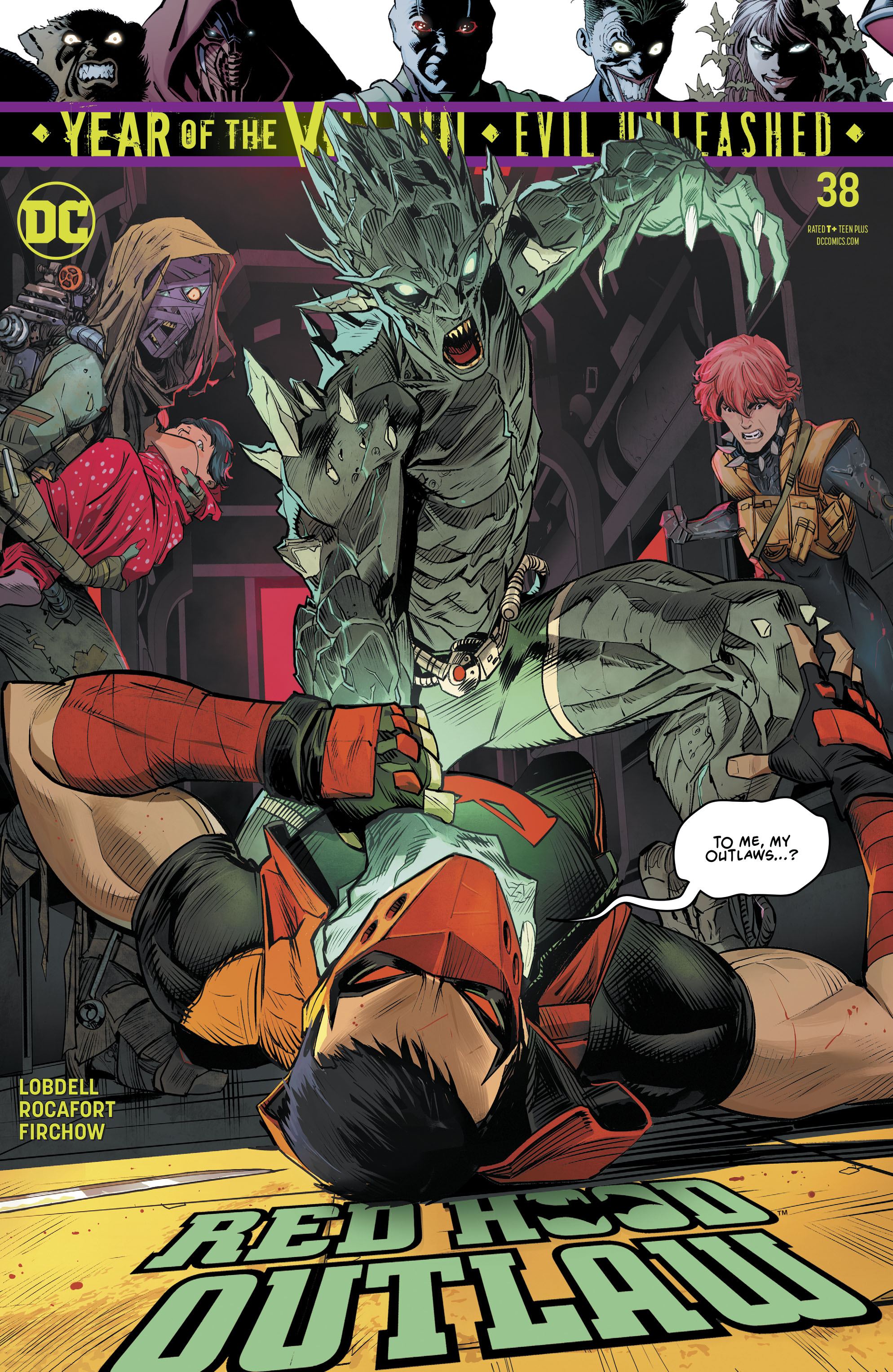 Synopsis (spoilers ahead): Starting our story, we catch back up with Bizarro and Artemis, who after the events of the last issue, uncovered Ma Gunn, Jason Todd’s pseudo-grandmother-figure. Only she’s been shrunken down to the size of a toy and hidden inside a bottle. Bizarro tries to pull back some of his lost intelligence from when he was a twelfth level intellect, but at the moment, all seems too much for him. They hope to eventually find Jason Todd again and try to help Ma Gunn in the meantime.

With that, we leave them to find Jason and his class of delinquents right where we left them last issue: staring down a Doomsday-style metahuman munching on human bones. The beast still has Cloud 9 in his grasp, and Jason wants the team to hold until they can think of a proper plan. The Doomsday-meta screams at them and Devour runs into to contain it, growing his hand out into a giant cage to capture the meta. It at first looks one and done, but the meta just shatters Devour’s hand-cage, surprising everyone but the most stoic (Jason). We then flashback to one of Devour’s memories as he recoils from the pain of his hand and arm being shattered.

We travel back in time to North Korea, shortly before joining the school. The hospital is freaking out because Devour is eating the machine that was used to monitor his heart. The doctors order the kid to be shot, fearing his form as he incorporates the metal into his body, but Lex Luthor shows up out of nowhere to save him. Offering him a place here.

Returning to the present, we see the rest of the team trying to fight the Doomsday-meta. But its a big struggle and nothing seems to really phase it. DNA manages to entangle the meta in their body, and in doing so seems to learn something. They immediately try and stop the fighting. They reveal that they were able to tap into the Doomsday-meta’s mind because they are both genetic mutations and that the Meta, name “Reiser”, did not actually kill the guards that he was munching on. Jason then applauds DNA and reveals he knew all along what was going on. DNA exposits to the rest of the group what Reiser’s backstory was, which happened way back in a Superman issue that Lobdell wrote involving a normal person getting infected with Doomsday spores. He tried to get help at STAR Labs, but it didn’t go so well, and now he’s stuck like this. Jason further reaffirms to the group that he fully looked up Reiser’s dossier before he leads the team on this mission, thinking it would be a good teambuilding exercise.

Reiser then tries to speak up to the group, and with help from DNA, is able to warn them that the monsters that actually attacked this place are still around, cueing the arrival of next issue’s antagonist.

And before we can wrap up the issue, we come back around to Bizarro and Artemis trying to figure out how to fix Ma Gunn, when the bottle suddenly shatters out of nowhere. They can’t yet find Ma Gunn among the pieces, but another voice speaks up. It’s Pup-Pup, Bizarro’s imaginary friend/stuffed Superman doll from when he was super-smart.

Analysis: A very decent continuation of last months issue. None of the characters got much in terms of growth, but that’s not unexpected considering the last issue we spent the entire book getting to know them. We learn a little about Devour’s backstory, which is good because out of the rest of them, Devour had the least backstory shown in the last issue, but its only a few pages and most of it is devoted to showing other people’s reactions to Devour, not Devour’s own reactions. It’s interesting that the character is from North Korea and I’m curious to see how such a regime would influence Devour’s personality, but at the same time, reminding us that North Korea is still a thing, with Superman and the Justice League hanging around? It just doesn’t make any sense that such a nation would even be possible to exist. Though I doubt this will actually be addressed, I wonder if North Korea has its own supers to control the nation and safeguard it from outsider superheroes. Though if they did, you’d have to wonder why they tried to have Devour killed instead of recruited them.

DNA was the other breakout character of this story. I’m a sucker for shapeshifters and it’s interesting seeing a modern-day non-binary character, who empathically connects to the verbally stunted and helps them find a voice. I’m curious if DC will actually use any of these characters after the story is over and done with, but DNA is certainly one I hope we get to keep around.

Cloud 9 and Babe-in-Arms didn’t get much outside of a few response/replies, and Jason has sorta fallen into the pure-mentor role, letting the story focus on the class, not him. Which is refreshing considering what the last two story-arcs were and how they were all obsessed with Jason as a badass who always won.

Reiser didn’t get much to actually tell us about him yet, but he’s a nice tank, which is a good counter to how everyone else on the team is either ranged, rogue, or shapeshifter. Having a damage-sponge as well helps even out the powerset. I imagine though with his speech problem, he won’t get that much character exploration until another three issues have past, so be patient if you are a big Doomsday fan.

Final Thoughts: Overall though, the story was a good continuation of the last issue. Everything seems to be going in the right direction narratively.