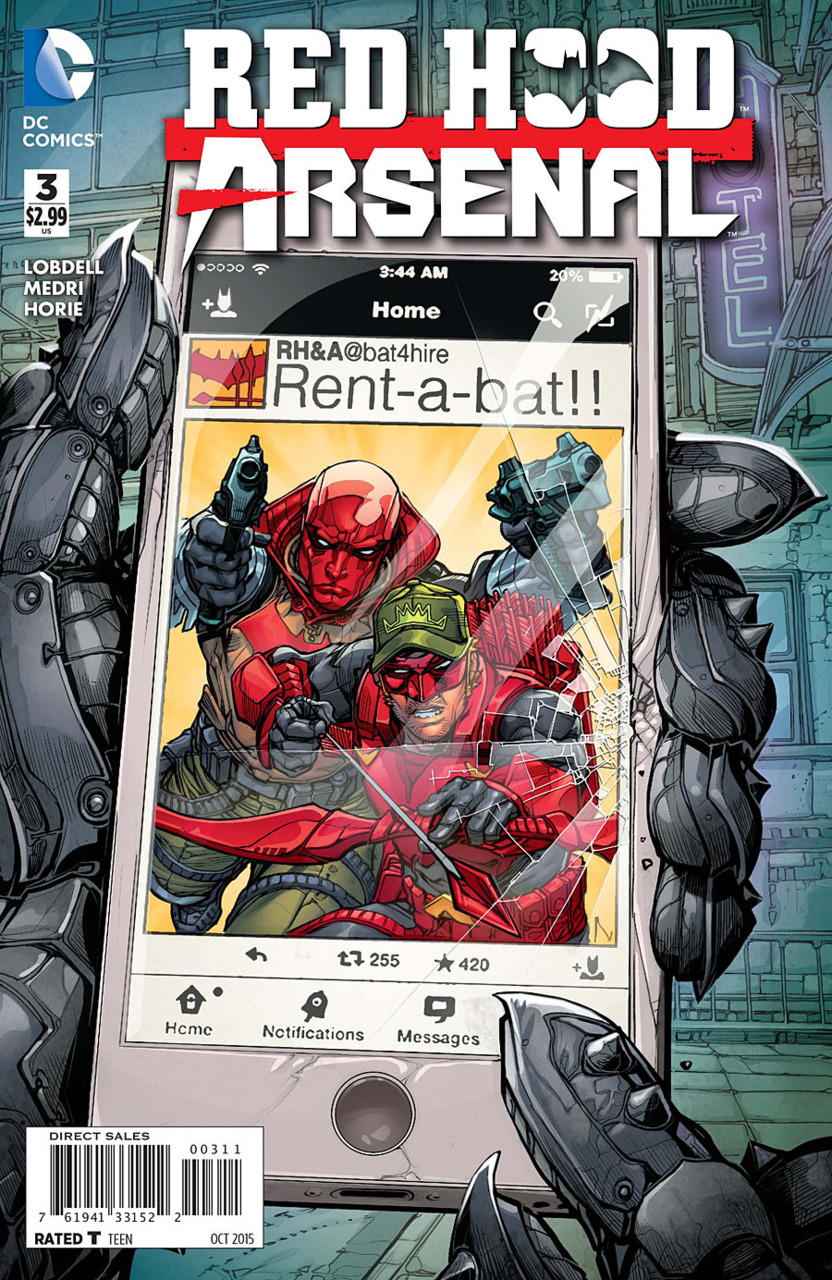 “Tales from the Underbelly” starts with Arsenal shooting Red Hood with an arrow. He did this to save Jason from falling to his death. As Roy lifts Jason, we see a huge billboard advertising Red Hood and Arsenal as “heroes for hire”. We cut back to the LA warehouse that Jason and Roy are using as their new base. Roy is patching Jason up when an irate Tara Battleworth barges in. She is angry and has a video that Roy commissioned advertising Red Hood and Arsenal as heroes for hire or more appropriately “Rent-A-Bat”. Tara wanted the two to remain secret and she cannot hire them again for any missions because they are now too public and leaves telling them to lose her number. In between we see the mimes from the previous issue and a mystery woman watch the Rent-A-Bat commercial as well. She is the one responsible for rescuing the mimes and she has some plan and Red Hood and Arsenal need to be dealt with if her plan is to succeed.

We learn that Roy spent all of the two’s money on the ad campaign but there is nothing to worry about as they already have a real client.

In Detroit, Red Hood and Arsenal meet a man. He is coy about working for a real criminal. After a back and forth were the duo try to guess who the criminal is we learn that the man is working for Underbelly. This leaves the pair underwhelmed as they have no idea who this Underbelly is. Not to worry though the pair have an appointment to meet Underbelly at seven in the evening.

The two enter a warehouse and are face to face with Underbelly who is a grotesque blob sitting in front of them. Underbelly describes himself as “a thought made man”. He is the living embodiment of evil; he is everywhere and every embodiment of sin. He wants Red Hood and Arsenal to be his enforcers who will strike at Underbelly’s enemies and quickly knocks off the head of the man who first met the pair in the park. Red Hood quickly blows away the grotesque blob in front of them. Roy in incensed, they cannot expect to get paid if they kill their employers. Jason is fed up, they are to go back to LA and end this Rent-A-Bat thing once and for all. However, Underbelly is not dead at all, and he quickly attacks Roy and Jason. Underbelly cannot be killed and if Jason and Roy will not serve him, they will die. Underbelly makes the mistake to concentrate on Jason probably because he is the one who unloaded his guns into him. This lack of interest in Roy allows him to release an electric arrow that fries Underbelly to pieces.

Jason has a change of heart about this ad business. They would not have known about Underbelly’s existence if it wasn’t for the ad. Jason is convinced that the only way to really stop Underbelly is to go the most crime infested city in the country, Gotham City.

We close with the pair in Gotham but they are being attacked by the new Batman. Next issue: Anyone want to Guess?

After two basic one shot stories, this issue seems to start the first arc of this book. I really cannot say much happens but we do get some action and the introduction of this new villain Underbelly. I liked the artists depiction of the character, Underbelly is drawn as very grotesque and seemingly muddy blob very much like some of the depictions of Clayface but I do not see Underbelly as a shape shifter per say, I see his as a blob of goo.

Unfortunately, I did know it was only a matter of time before Jason would be face to face with the Jim Gordon Batman and I hope that Gordon does not monopolize the next issue too much as personally I am not a fan of this new direction of Batman. The issue had good action for a set up issue and an interesting new villain but I guess we had to see the new Batman if Jason and Roy were going to Gotham.